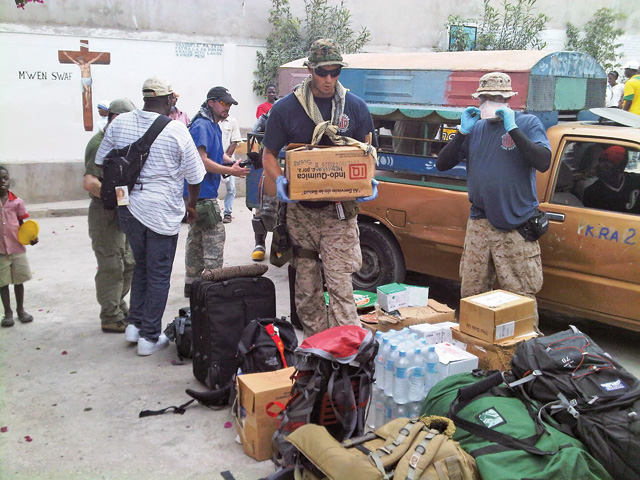 The moment he saw the destruction on TV in January 2010, former Marine scout-sniper Jake Wood knew he had to get to Haiti. He called a few friends, posted a quick note on Facebook – “I’m going to Haiti. Who’s in?” – filled some duffel bags with first-aid supplies and headed for the airport.
Team Rubicon was born.
Forty-eight hours later, Wood joined seven other volunteers – Marines, firefighters, physicians, a priest and a former Special Forces medic – at the Santo Domingo airport in the Dominican Republic and headed for the Haitian border. Six days after the magnitude-7 earthquake devastated the region, they were running a makeshift emergency room in the courtyard of Port-au-Prince’s largest hospital.
By the end of the mission, Team Rubicon had treated thousands of Haitians and started a rapid-response group that has since dispatched combat veterans to natural disasters from Alabama and Indiana to Burma and the Sudan.
“I self-responded to Hurricane Katrina with a buddy from high school, and I saw how poor the response could be when things got overwhelming,” Wood says. “No one is better qualified than veterans to do this. This is an opportunity for them to feel like a part of a team, to engage in a mission. This is the opportunity I’ve been looking for since I took off the uniform (in 2009).”

Disaster Business. Before the Haiti disaster, neither Wood nor Team Rubicon co-founder William McNulty had considered using relief work to help veterans transition to civilian life. In fact, McNulty had never met Wood when he telephoned him to say, “I’m in” after seeing Wood’s Facebook post about going to Haiti.
Wood was taking college classes and applying to MBA programs following deployments to Iraq and Afghanistan. The 6-foot-6-inch former University of Wisconsin left tackle wasn’t sure where business school was taking him. Banking, perhaps. “I was hoping to discover an entrepreneurial opportunity,” Wood says. “I was going to graduate school to give myself two years to figure out what that plan would be.”
McNulty was working in the intelligence community after two tours with a private contractor in Iraq. Dissatisfied, the former Marine formed a production company, bought the rights to ex-CIA officers’ stories and geared up to make his first film. “Never did I set out to start a disaster-relief organization,” McNulty says.
Haiti rewrote the script.
The aftermath of the earthquake was horrific: children with crushed limbs, the smell of gangrene, the urgency of amputations. Death. The pressure of being the only relief effort in the area.
“We were all going through something,” McNulty says. “We didn’t realize it was going to have a huge impact on our lives.” By the second day at the hospital, he was so overcome with despair that he stepped outside and cried.
But there was promise as well. Team Rubicon’s ranks grew every day. Ten doctors and nurses from Chicago arrived with two and a half tons of medical supplies. McNulty managed to get the supplies from the airport to the hospital despite a U.S. Army officer who tried to seize them for the American embassy. Clay Hunt – Wood’s best friend from the Marines – tracked the team down in the chaos of Port-au-Prince on the third day with nothing more than GPS coordinates, and started changing bandages, casting fractures and fashioning crutches from tree branches and duct tape.
“You could see tangible results,” McNulty says. “You knew the work you were doing on a child was going to save a life. That’s very important to veterans of Iraq and Afghanistan.”
On their fourth day in Haiti, McNulty turned to Wood and said, “Jake, I think we have a model.” An attorney and former Marine following Team Rubicon’s work on the Internet also thought there was a future for Wood’s and McNulty’s approach to disaster relief.
“My dad was kind of running things for us back home,” Wood says. “On Day 6, he called to say, ‘Some lawyer just incorporated you as a nonprofit group.’”

Bridge the Gap. Team Rubicon initially focused on replicating its Haiti blueprint by pairing military veterans with medical volunteers and getting them to disaster scenes while the larger, more established groups were still mobilizing. A month after the devastation in Haiti, Chile suffered one of the largest earthquakes ever recorded. Wood, McNulty, Hunt and other volunteers headed to South America and again showed that their model worked. However, there was less demand for their skills because Chile was better prepared to deal with natural disasters. Team Rubicon decided to focus on underdeveloped countries, particularly places where other groups didn’t feel comfortable sending volunteers.
“We’re getting young, hungry military combat veterans,” Wood says. “Everybody has the mindset that there’s nothing they can’t do.”
Team Rubicon has sent combat veterans with trauma expertise to Burma to train medics in a region that suffered violent government repression. It returned to Haiti when a cholera epidemic ripped through the country. It performed a monthlong medical mission in South Sudan. It sent a team to Pakistan to help flood victims. The list goes on.
Team Rubicon has bridged the gap between a disaster and the time when more established aid groups were able to respond. The group travels light, and hires locals rather than trying to fly in enough vehicles, equipment and personnel to take care of every imaginable need. “I think the biggest difference is what happens when we hit the ground running,” Wood says. “A lot of organizations set up tents and white boards and do risk analysis. We do our analysis on the fly, just like they teach us in the military.”
At every turn, the team relies on personal connections and persistence to gain access to disaster scenes: the childhood friend who played squash with the Pakistani doctor who knew the Pakistani ambassador to Japan who could connect them to the Pakistani ambassador to the United States. The Alabama doctor whose uncle knew the Tuscaloosa fire chief and could direct them to where help was most needed. The Haitian ambassador who took McNulty at his word and wrote letters in both Spanish and French Creole guaranteeing their safe passage across the Haitian border.

Renewed Purpose. Veterans who struggle to find their place after leaving the military thrive with Team Rubicon. Hunt – Wood’s scout-sniper partner – seemed to only find relief for his PTSD and depression when he was on missions.
“I cannot tell you how good it feels to be able to go into a rubble-strewn city in a Third World country and to be able to do good without having to worry whether or not everybody around is about to start shooting at you,” Hunt wrote after his third trip to Haiti. “I found a renewed sense of purpose within myself that has been missing since I separated from the (Marines). I found myself in the company of a band of brothers once again, which has been absolutely priceless to me.”
People noticed the difference in Hunt, who grieved the loss of four close friends in combat and was frustrated by his battles to get help from VA.
“It was such a good fit,” says Hunt’s mother, Susan Selke. When he came back from missions, “he was on top of the world.”
But the PTSD and the depression were too much. Hunt killed himself in March 2011, not long after the Houston VA hospital sent him home without filling his new antidepressant prescription, telling him they would mail it to him in two weeks.
Team Rubicon reeled.
“It wasn’t until Clay killed himself that we took a hard look at what service meant to a veteran – a sense of purpose, of self-worth,” McNulty says. “Things veterans lose when they take the uniform off.”
Wood and McNulty realized that the organization had to engage more veterans more often, and in their own communities. Team Rubicon had to perform disaster relief at home.
A month after Hunt killed himself, a tornado ripped through Tuscaloosa, Ala. Team Rubicon Domestic was born.
Twenty-five volunteers turned out to tarp roofs, remove trees and clean up debris. “That jump-started what became our flagship program,” Wood says. The work was just what J.C. McGreehan needed. “My transition from the military was pretty difficult,” says McGreehan, who served in the Army. “I had this incredible gap in my life. Just knowing you have even five minutes of positive impact on somebody’s life is so rewarding.” As Team Rubicon helped untangle Tuscaloosa, the veterans’ cellphones began ringing with the news that Osama bin Laden was dead.
“There was an outpouring of emotion from these normally stoic Marines,” says Dr. Alan Ogles, a family physician in Ashland, Ala., and a Team Rubicon volunteer.
Four weeks later, another tornado hit Joplin, Mo. Nicole Green found herself knee-deep in debris with Team Rubicon for the second time in two months.
“At the end of the day, I was exhausted and dirty from working with my hands,” says Green, who works as a management consultant in Washington. “But I did something that made a difference in other people’s lives. That’s something I wasn’t getting in my day job.”
Team Rubicon’s volunteers have positioned themselves as specialists in their field.
“There’s a massive gap in this country when it comes to disaster relief,” says Matt Pelak, field operations director. “The Red Cross and the National Guard don’t go out and get dirty cutting down trees and tarping people’s roofs.”
And who better than America’s veterans to answer the call?
“Veterans need challenges and opportunities,” Wood says. “It’s foolish not to tap them for disaster response.”

Sustaining Success. Team Rubicon recently moved from its founders’ apartments into a spare warehouse near Los Angeles International Airport, where the windows rattle when jets swoop in to land. The organization has a well-stocked mission locker and is recruiting regional directors. The number of volunteers tripled in two months last spring. And Team Rubicon’s model for helping veterans while helping disaster victims is gaining recognition. Veterans advocates have inquired about establishing similar relief programs in Australia and Norway.
Nevertheless, Team Rubicon struggles to keep the lights on and provide meager salaries for five staff members. Donors step forward to help send Team Rubicon to natural disasters here and abroad. But the organization’s rules require that any portion of a donation not spent directly on disaster relief be returned to donors or used for future missions. None of it can go for overhead.
Meanwhile, Team Rubicon’s founders have emptied their bank accounts and maxed out their credit cards as efforts to find funding have faltered. “We’ve gotten turned down for grants because people think we’re too well established,” McNulty says. “It’s frustrating.”
Team Rubicon is living on a small grant from Google while it looks for ways to sustain its mission. But Wood remains as undaunted as the day he announced his Haiti trip. “I’m obsessed with the idea that Team Rubicon can make a difference in the lives of veterans,” he says. “We’re sitting on a gold mine of energy and enthusiasm and talent.” Ken Olsen is a frequent contributor to The American Legion Magazine.