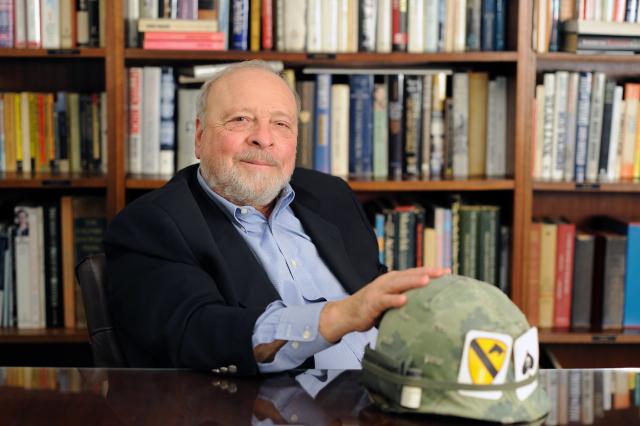 Nelson DeMille could hang honorary degrees and literary awards on the walls of his office. There have been many. Having sold nearly 50 million books worldwide in a 35-year writing career, he is an author whose work has been converted into one Hollywood hit and a critically acclaimed made-for-television movie. He could easily hang fan letters, contracts and royalty checks on his walls, if he so desired. He does not so desire. What hangs on the walls of his daily area of operation, instead, are memories of his areas of operation from long ago, when he was a young combat officer in the Vietnam War.
DeMille, a 27-year Paid Up for Life member of The American Legion, was a U.S. Army first lieutenant attached to the 1st Cavalry Division who served in Southeast Asia from late 1967 through late 1968. He was there during the Tet Offensive, Khe Sanh and the bloody battle to control A Shau Valley, a critical artery from the Ho Chi Minh Trail into South Vietnam.
On DeMille’s walls are photos of the guys with whom he served. There’s a panoramic black-and-white shot of his basic-training class from Fort Gordon, Ga. His Bronze Star and Air Medal citations are there, as are his framed discharge papers. Propped on the head of a mannequin in one corner of the office is his combat helmet with an ace of spades and a pack of Camels tucked into the band. The shelves of his library are filled with old Army field manuals, officers’ guides and military maps.
His most recent novel, “The Panther,” debuted at No. 1 last October on The New York Times Best-Seller list. The book is largely set in Yemen and features two of DeMille’s reappearing characters, John Corey and Paul Brenner, who pursue a terrorist fictionally connected to the October 2000 attack on the USS Cole. The war on terrorism serves as the backdrop for this, his 17th novel, as he now works on his 18th. But the war that never completely left DeMille’s consciousness is the one in which he, himself, fought. The Vietnam War is frequently woven into his page-turning mystery-thriller books and was the tapestry behind “Up Country,” a 2002 novel inspired by a trip he made with two other veterans back to Southeast Asia in 1997. After a slow start, “Up Country” has become his second-best seller and is now in development by Paramount Pictures.
DeMille recently spoke with The American Legion Magazine about his work and life before, during and after the Vietnam War

PART 1: BEFORE THE WAR

How did your upbringing lead you to service in the U.S. Army?
My father was Canadian, and he served in the Canadian militia before World War II. Then he came to the United States and wound up in the American Navy in ’44. Most of his brothers were in World War II. I remember all of my uncles in uniform. Everybody served.
I was like 3 years old when the war ended, but I do remember seeing men on the street who were coming home. Everybody was excited. A lot of them were still in uniform because they hadn’t been discharged yet. My father came home before Christmas of ’45, and he kept his uniform on for a while. Then he went back to civilian life. I think the re-entry then was much different than it was for Vietnam. Everybody was thrilled that these guys were home. They started coming home in August, September and October of 1945. My father – because he was in the Navy – they kept him a little longer because the war was still going on in the Pacific until August. Some of the others came home after VE Day (May 1945). It’s a vague memory, but I can remember them on the streets, and in their houses, people visiting each other  … it was a really big deal.
My father wanted to stay in, but my mother said no. Then there were younger relatives, in the Korean War. So, when Vietnam came around – ’66 for me – it seemed natural. The war wasn’t that unpopular at the time. When I got my draft notice, my father didn’t think much of it. My mother was a little upset.
I was drafted in February, but to escape the draft, I enlisted. So in March, I enlisted, and I went in in April ’66. I wanted to go in under my terms, not their terms.

You were not unfamiliar with military life after ROTC at Hofstra University.
The anti-war stuff wasn’t that big in ’65 and ’66. So after I got in in  ’66, I went to basic, went to advanced infantry training, and then I was picked for Officer Candidate School, with three years of college and two years of ROTC at Hofstra.
They wanted anyone over 19 years old. They were looking for officers. They kept lowering the requirements – to three years of college, two years of college, one year of college. They finally lowered it to high school grad, and you had to be 19 when you graduated OCS. So, they were turning out 19-year-old kids. When I went in, I don’t know what the requirements were, but I met the requirements. That was a good thing.
I had enlisted for intelligence school, but I didn’t realize that when you accepted OCS, everything on your little contract with the Army was null and void. I signed up as an enlisted man – it would have probably been good if I’d stayed an enlisted man – but when I became an officer, everything changed.

Your interest in military intelligence – a prominent part of many of your books – started at that point then.
I was fascinated by it. I was a product of James Bond, and everybody else was in those days. I saw myself as an intelligence officer. I was either going to stay in as an intelligence officer or apply to the CIA. Those were my aspirations. I was 23. I wound up as an infantry officer, which was not my first choice. Infantry was not on my list. It wasn’t on anybody’s list.
But I was an infantry officer, and that was it. So I trained troops at Fort Benning, where I graduated OCS, and then I got an assignment to Fort Gulick, Canal Zone, for four weeks of jungle training. That was my first clue I wasn’t going to Korea or Germany. When I came back from Panama, my orders arrived for Vietnam.

Did you pursue additional training?
I applied for airborne school because I was right there at Benning. I applied for Ranger School. I applied for Special Forces. I figured if I am doing it, I might as well do it right. But these schools were full. They were full of a lot of West Pointers who had first dibs and other people who had been waiting for a long time. So I complained to my branch officer, and he said, “I’ve got something for you – a couple of slots at Fort Gulick, Canal Zone, Panama…. You’re going to jungle training.”
I figured from there, I might get into airborne or something, but it didn’t happen that way.
I came home for a week not knowing what my assignment was going to be. Then I got contacted by mail – a regular letter – saying I was going to the Southeast Asia theatre of operations. I looked at the map and said, “This is probably Vietnam.”

Where was the Vietnam War in terms of public awareness at that time, and how did your family react?
This was October 1967. I knew it was hot. My father explained that I could have enlisted in the Air Force or the Navy instead. I was ambivalent. One side of me was adventurous – I wanted to do this – and the other side of me said, “You could get killed over there.”
I didn’t know any veterans at the time. When I got to basic training, a lot of the cadre were Vietnam vets already; they had already served a year or so and come back.
I never will forget at advanced infantry training, one of the sergeants had been wounded in Vietnam. He said he was OK, but he started hemorrhaging one night from the wound. They rushed him to the hospital. We were starting to see the backflow from Vietnam. We realized we weren’t in ROTC anymore.
One of my cadre from OCS was killed after he left OCS. He went to Vietnam, and I kept in touch with him while I was training troops. He got shot in the back, and he died.
You started to see people coming back with their wounds, and it became real. It was heating up. It was in the papers. Still, when it came time for me to go, I was OK with it.
My mother was frightened. Totally frightened. She had already gone through this with all of her brothers. One of them was a bomber pilot over Italy. They all survived. Nobody in my family was actually killed in World War II. They all came back. But people on the block, people in the community, we understood it because people talked about it for years… “Jerry never came home,” or whatever.
In the World War II generation, you grew up with that. It seemed like a natural part of life. People thought there would never be another war. Then there was Korea and then Vietnam, which, I think, for a lot of reasons, a generation felt cheated, that there should not have been another war.

You grew up on Long Island, the son of a house builder, went to public school and, like most kids, played soldier before you actually became one.
We all had air rifles and swords and shields. Today, it would be considered child abuse. We would get on our bikes with these wooden shields and long poles – dowels to hang clothes – and we would joust with them. This was on a concrete street or blacktop. We would go at each other. Think about it now – head injuries and trauma – our parents would all be arrested, and we would be in counseling for the rest of our lives. But that’s how we grew up. That’s how the whole generation grew up. Every generation needs their infantrymen.

ROTC was not a major transition from your childhood then.
Two years was mandatory. My father gave me encouragement. Some mornings, when I had really early ROTC, and I had to put on my uniform in the morning with no time to change at school, and I would go through the house in uniform, and my father would say, “You look good.” A little bit of reinforcement wasn’t that unusual in those days. We didn’t cry so much about mandatory ROTC. Could you imagine mandatory ROTC now on campus?

How did other students respond to mandatory ROTC?
Most people accepted it. Maybe in a class of 300 men, 90 percent were in ROTC, and the other 10 percent found a way to get out of it. Most people were just there. It was that post-World War II generation. You kind of did what you were told. Was it good? Kind of good. It was all right. It gave us something to complain about. Some people loved it. It gave them the opportunity to make their own decisions about what they wanted to do. I’m not sure if mandatory is a good idea, but certainly (ROTC) should be there for anybody, rather than banned from campus, or discouraged.

PART 2: IN COUNTRY »
Save
Tags: Magazine