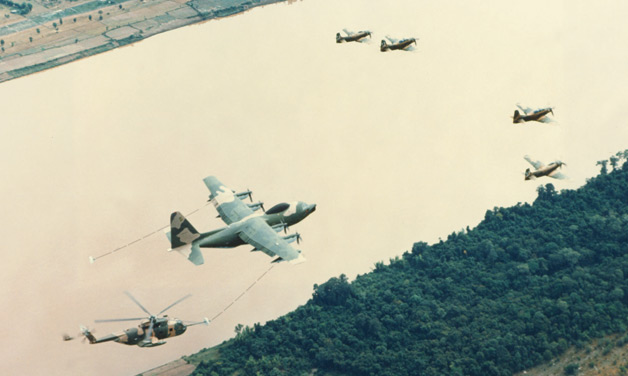 Built for Jet Age nuclear retaliation against superpowers, the U.S. Air Force had a problem when it was called upon to fight
a conventional war against tenacious jungle insurgents.
“We had the wrong airplanes, the wrong weapons and the wrong training for that kind of war,” says retired fighter pilot Dick Anderegg, who flew 170 combat missions in Vietnam and recently retired as director of the U.S. Air Force History and Museums Program. “That was a burden that was difficult to work around.”
The air war faced other challenges. The on-again/off-again bombing strategy of President Lyndon Johnson’s administration did more to enhance North Vietnam’s defenses than it did to dampen the enemy’s resolve. Commanders were reluctant to shift B-52 bombers from nuclear deterrence to attacking North Vietnam. And controversy over the bombing of North Vietnam and Cambodia fueled the protest movement at home.
Vietnam also marked the end of an aviation era. It was the last time the United States sent significant numbers of propeller-driven aircraft into combat, from fighters such as the A-1 Skyraider to forward air control planes like the O-1 Bird Dog and flying boats like the Navy’s SP-5B Marlin.
Ultimately, the Air Force and Navy adapted to the demands of the day. Abandoned production plants were resurrected. Training was revamped. Jet pilots found themselves flying single-engine Cessnas at 100 mph, training planes served as fighter-bombers and transport planes were turned into gunships, as Air Force historian Richard H. Kohn wrote in the forward to “The War in South Vietnam: The Years of the Offensive 1965-1968.”
The Air Force and Navy also emerged from the Vietnam era armed with first-generation smart bombs, better aircraft and a renewed appreciation for aerial combat training, says Hill Goodspeed, historian for the National Naval Aviation Museum.
“It was a complete makeover,” Anderegg adds. “A shift from a massive retaliatory nuclear force to a force able to operate across the entire spectrum.” That makeover ultimately led to overwhelming U.S. aerial success in the first Gulf War.

Operation Rolling Thunder. The Air Force and Navy flew missions in Southeast Asia well before the United States committed large numbers of ground troops to the war. C-47 transports ferried U.S. military advisers and supplies around South Vietnam beginning in the mid-1950s. C-123
Provider transport planes were charged with spraying Agent Orange in 1962. And Lt. Charles Klusmann was the first naval aviator shot down while flying a reconnaissance mission over Laos in June 1964.
Operation Rolling Thunder launched one of the first high-profile air campaigns against North Vietnam. Crafted by Johnson and Defense Secretary Robert McNamara, the bombing effort was stopped several times to induce North Vietnam to abandon its war against the South. Instead, the North Vietnamese used the intermissions to strengthen its anti-aircraft defenses and move additional supplies into South Vietnam.
Meanwhile, the Air Force and Navy were prohibited from striking North Vietnam’s air bases, key ports such as Haiphong Harbor, and many power plants and industrial sites for fear of civilian casualties or inadvertent bombing of Soviet and Chinese boats.
In the end, Rolling Thunder cost the Air Force 531 airplanes, and 547 airmen were killed, captured or went missing, according to Bernard C. Nalty’s “An Uncommon War: The U.S. Air Force in Southeast Asia.”
The campaign also failed to dissuade North Vietnam. “It’s difficult when you are fighting with one hand tied behind your back,” Anderegg says.
In South Vietnam, meanwhile, Air Force and Marine fighters flew close air-support missions. Forward air controllers in small single-engine airplanes provided the link between the troops on the ground and the A-1s, F-4s and other fighter-bombers in the air. “We were turning into an all-jet Air Force but still having trouble finding targets,” Anderegg says.
Anderegg arrived in Vietnam the day Neil Armstrong walked on the moon in 1969 and left on Memorial Day 1970. Flying F-4s out of Udorn Royal Thai Air Force Base, he hunted North Vietnamese supply trucks along a portion of the Ho Chi Minh Trail that ran through Laos. Across Vietnam, other Air Force and Navy pilots joined the fight with myriad aircraft, from the B-57 to the F-111. KC-135 tankers were integral to keeping this fleet aloft, particularly over North Vietnam.
The Navy formed special aerial units to support its riverine forces in South Vietnam. The VAL-4 “Black Ponies” flew OV-10 Broncos. The HA(L)-3 “Seawolves” flew UH-1 and HH-1K light attack helicopters and became one of the more highly decorated squadrons in South Vietnam.
Navy flying boats and land-based airplanes patrolled the shipping lanes off South Vietnam. AP-2H Neptune submarine hunters briefly dropped listening devices along the Ho Chi Minh Trail.
Operation Linebacker. President Richard Nixon unleashed U.S. air power in 1972 with a pair of bombing campaigns called Operation Linebacker I and II. The Navy’s new A-6 dropped laser-guided bombs on power plants and industrial sites, and A-6s and A-7s mined Haiphong Harbor. Waves of B-52s bombarded Hanoi and other parts of North Vietnam previously off-limits. By early 1973, North Vietnam agreed to end the war and return American POWs.
“When the nation decided they were going to employ air power without so many restrictions to bring North Vietnam into submission, we did it in about five months,” Anderegg says. “It was a pretty good demonstration of what air power can do when properly applied.”
And a critical lesson regarding the perils of restricted bombing campaigns. “There was a generation of junior officers who served in Vietnam who then were commanders in Desert Storm,” Goodspeed says. “They had an appreciation for how an air war shouldn’t be run.”
The Air Force and Navy also made significant technological strides during Vietnam. Three new models of the F-4 were introduced during seven years of aerial combat, each better than the previous version, Anderegg says. Three different laser-guided bomb improvements were introduced in a three-year period.
The Navy A-6 made its combat debut during Vietnam. The all-weather attack airplane carried a heavy load, could strike at night and was used with great success during the first Gulf War, Goodspeed says. There are several examples of these aircraft making single-plane raids on targets in North Vietnam, using radar to dodge surface to air missiles.
Both branches also came away from Vietnam with the realization that jet pilots had to be experts in air-to-air combat. That prompted the creation of schools devoted to the discipline, Goodspeed says.
“The results speak for themselves,” Anderegg says. “We had 35 kills and no losses in the Gulf War. No Air Force fighter received a scratch from an Iraqi fighter.”