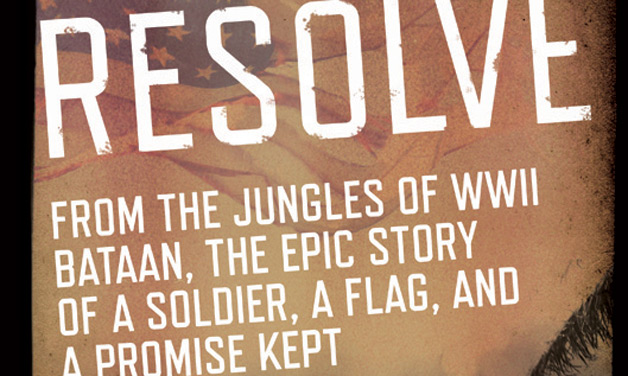 In April 1942, the Phillipines island of Luzon – the site of fierce World War II fighting – fell to Japanese forces. Gen. Douglas MacArthur had already been evacuated to Australia, where he promised over the radio, “I shall return.” Tens of thousands of U.S. and Filipino soldiers surrendered to the Japanese – and were then subjected to the infamous Bataan Death March.

Not everyone surrendered, however. Hundreds melted into the surrounding jungle to make their way as best they could. Author Bob Welch has written the new book “Resolve: From the Jungles of WWII Bataan, The Epic Story of a Soldier, a Flag, and a Promise Kept” about the story of one of those soldiers. Army Air Forces 2nd Lt. Clay Conner Jr., a New Jersey native and Duke University graduate, had ferried a set of golf clubs across the Pacific Ocean with him and was not renowned as a model of strength. But he spent nearly three years evading the enemy in the jungle; became the leader of a guerrilla network of death-march escapees, fellow soldiers and natives; and emerged to a reinforced American contingent accompanied by a flag that had “never ceased to fly over Luzon.” Welch recently spoke with The American Legion Magazine about his book and how Conner did it.

What, specifically, do you think it was about Conner’s early life and personality that enabled him to survive for as long as he did?
I think it was his ability to be something of a salesman. His father was always on the road when he was young, and Clay spent a lot of time as a door-to-door salesman. So even though he wasn’t the strongest, toughest guy in the group over there, when it came time to forge a relationship with the pygmy Negrito tribe, he was the guy who stepped forward and brokered the deal. And so I think the lesson is that it’s not necessarily what we have inside of us when we face some sort of giant obstacle – it’s what going to come out of us when we do. The other thing that was interesting about Clay was that he and his mom, because his dad was always gone when he was young, went to lots of movies. And he had this kind of Hollywood sense of grandeur. And so when a lot of guys got, I think, really down – you know, 34 months in the jungle, is MacArthur ever gonna come back for us? Are we doomed to live this the rest of our lives? – Clay was able to filter that through and sort of say, this is just a big adventure. This is fun! This is Hollywood! Let’s make the most of it.

Several times Conner encountered survivors from the death march, people who had escaped. What was his sense of it, of what was happening to all his fellow soldiers?
Within a few weeks, word had filtered into the jungle of what happened on the death march. It wasn’t as if [Clay] and his buddies had found paradise in the jungles of Luzon, but I think what they realized is they may have made a very wise decision. And that’s not to fault any of the thousands of men who chose otherwise, but I think they realized the Japanese were not the cordial hosts that many who survived thought that they might be. And so I think that kind of kept them going and made them realize that [taking off into the jungle and trying to survive on your own] might be the least of two evils, frankly. They had great respect for any other man in uniform, whether he was trapped on the death march, had escaped it or eluded it. There seemed to be a oneness of spirit there, for the most part, that the men shared.

In organizing this network of co-survivors, was there some sort of system he based it on? How did he keep going?
This is a generalization, but among the men there there were doers and there were thinkers. There were task-oriented people with their hands, and there were visionairies. And Clay was a thinker, Clay was a visionary. He was the guy who realized that what they needed more than anything was a sense of purpose. After his initial spell of surviving malaria and starting to get better and stronger, he started to learn Tagalog (the language), he started to read the Bible – he started to kind of realize, OK, it looks like we could be here for a while. If that’s the case, we need to do something. We need to be the stars of our own movie. And so when he had the opportunity with the Filipinos to form this guerrilla band, to become organized and try to defy the Japanese, I think he relished that and it gave him a sense of purpose that I think spread to the other guys. Because that’s what they were constantly facing, was this idea that their lives were meaningless, that they were just going to die out there, that MacArthur’s men were never gonna come back. But if they had something to concentrate on, then it heightened their sense of survival and it made tasks all the easier, realizing that they weren’t just sitting around twiddling their thumbs – they were part of an adventure. They had a sense of purpose.

What ultimately happened to the flag that they came out of the jungle with?
Malcolm Decker, whose father was among the soldiers who wound up being part of Clay’s guerilla outfit – as far as I know, nobody searched for that flag more than him. He never could find physically where it wound up. It was ultimately given to MacArthur, according to a postwar letter. Anyway, in the early 2000s Decker searched “every possible museum and military memorial site” for the flag, but was unable to locate it. So at some point, apparently, it got to MacArthur – what happened to it after that, we do not know.

You’re written other books about this time period. What was it about Conner, specifically, that made you want to write a book about him?
I think that it was that he was such an unlikely leader. In the early days, when the Japanese were forcing our troops down to the southern tip of Bataan, Clay did not emerge as an impressive leader. In fact, some of his men called him out in terms of hoarding food and everything, and basically called him a coward. Clay said that really hurt him, because he realized it was true. And so this guy who was a golfer/cheerleader from Duke, who never spent a night camping outside, not only didn’t have the physical attributes of a survivor, but he didn’t even have the respect of his own men. And so that’s why the story is so fascinating, because he was about the least likely guy to survive physically, and the least likely guy to command the respect of the men under him. And yet when the war was over, he was physically tough and he was a leader. Men stood behind him. Men claimed that he was their closest friend in the world and that basically they owed their lives to him. And so to me the fascination of “Resolve” is that it reminds us that it’s not who we are at the start of a trial, but who we become during a trial, that really counts. I can remember the moment I decided to write the book. Jim Conner – his son – and I were on the phone and I was saying, “Well, can you tell me a story about your dad? Tell me something about your dad, that happened over there that was interesting.” He didn’t hesitate and told me the story that we have in the prologue, about him running from the Japanese – how they searched him out for days, tried to burn him out of the Cogongrass, and how he ultimately survived by wriggling himself into the mud banks of a creek, basically burying himself alive and breathing through a reed so the Japanese would not find him. And I thought, “I gotta write this book.” Because you don’t hear stories like that too often.

Given the march and everything that happened around it, and the story of Conner and his men – what are the lessons, maybe, for today’s society or today’s military?
One of them is kind of a cliché, and that’s the whole idea of perseverance. The same thing that we saw in Louis Zamperini in “Unbroken,” it’s the same thing we see in our soldiers in Afghanistan today – a willingness to just persevere against the odds. The second and third lessons maybe aren’t so obvious, and the second one I think would be humility. It’s one thing to have a lot of pride in what you do, but humility requires you to realize that you don’t have all the answers and you might need to seek help from somebody else to find those answers. And so I think that Clay humbled himself, realized that he didn’t have all the answers. And the third thing is that he forged a friendship with the natives that in essence saved lives, through that humility. So that willingness to get along with people whose country you’re fighting in. We had a terrible track record in the Philippines at the turn of the century, right after the Spanish-American War. We slaughtered thousands and thousands of innocent people – and it was an ugly side of America, frankly. And I think Clay, though at that time I don’t think that he would be thinking that he was doing anything noble – I think he was the opposite of that. He had a fascination and a respect for the natives that I don’t know that a lot of other men did. He was intrigued by the pygmy Negritos. He thought it was strange that the higher command had not taught the men more about local customs and what they believed in politically, what they believed in in terms of religion, who they really were. Clay was interested in the people for those reasons, and had a high regard for them. And I think that respect, in the end, saved his life, saved the lives of his men. This is a guy who, 30 years after the war was over, has Crito – the young Filipino who saved his life in the jungle – he insists that Crito move to Indianapolis to save his own life. And so this great irony, that Crito helped Clay navigate the real jungle in the 1940s, and then later on Clay helped Crito survive an urban jungle in Indianapolis and basically saved his life, because Crito moved his family there because there were death threats on him back in the Phlippines. And that shows the depth of his friendship with these people. To his dying day Clay said, “When I heard that the head of the pygmy Negritos had died … I bawled like a baby for days.” I mean, this is a guy who truly built a relationship with the Filipinos and Negritos that stayed with him his entire life. And I think that’s an honorable thing.

Learn more about “Resolve: From the Jungles of WWII Bataan, The Epic Story of a Soldier, a Flag, and a Promise Kept”:
bobwelch.net/books/resolve