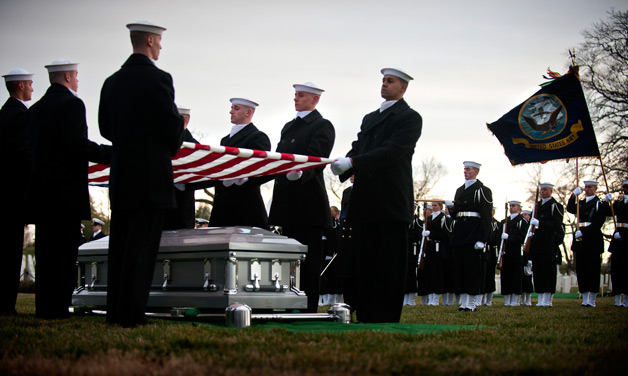 In August 2002, U.S. Navy divers helped raise the 150-ton gun turret of the famed Civil War ironclad, USS Monitor. A storm off Cape Hatteras, N.C., sank the warship and drowned 16 of its crewmen on New Year’s Eve 1862. Inside the turret, the remains of two shipmates were found, and efforts were made to identify them. Their identities remained elusive, and on March 8, 2013, the two unknown shipmates were buried at Arlington National Cemetery with full military honors.

It had been 151 years to the day since the Monitor battled the Confederate ironclad Virginia (or Merrimack) to a standstill at Hampton Roads, Va. It was the first time that steam-powered ships with iron armor had engaged in combat; the event changed the course of naval warfare and marked the beginning of the end for wooden warships.

At the funeral service in the Fort Myer Memorial Chapel, author and Civil War historian James McPherson said, “The sailors on the USS Monitor lived up to the highest traditions of courage and sacrifice in the United States Navy. To a man, they were all volunteers for service on this experimental vessel of radical new design.”

Secretary of the Navy Ray Mabus, who served as an officer on board the cruiser USS Little Rock, also spoke at the service. “This may well be the last time we bury Navy personnel who fought in the Civil War at Arlington,” he said. “But we do not hesitate to keep faith and to honor this tradition, even more than 150 years after the promise was made. Our nation honors our fallen sailors, soldiers, airmen, Marines and Coastguardsmen because we do not want their sacrifice – however distant – to be unremembered.”

Describing the ironclad’s final moments at sea, Mabus quoted from a letter written by William Keeler, one of the ship’s 46 survivors: “The heavy seas rolled over our bow, dashing against the pilot house, and, surging aft, would strike the solid turret with a force that would make it tremble … Words cannot depict the agony of those moments as our little company gathered on top of the turret … with a mass of sinking iron beneath us.”

Mabus noted that March 8 was also the 124th anniversary of the death of John Ericsson, the Swedish-American inventor who designed the Monitor. He hurried his ship’s completion in only 118 days at the naval yard in Brooklyn, N.Y. The warship was then towed to Hampton Roads for its fateful encounter with the Virginia, which had already destroyed two wooden Union Navy warships.Raising the Monitor’s turret took a joint effort of the U.S. Navy, the Mariner’s Museum in Newport News, Va., and the National Oceanic and Atmospheric Administration (NOAA).

During the service, Kathryn Sullivan of NOAA said the Monitor’s location became America’s first National Marine Sanctuary, “marking it forever as a place of special national significance. Today we take another major step, laying two of her sailors to rest in the hallowed ground of Arlington National Cemetery. As we do so, let us all reaffirm our own commitment to forever remember the work of the Monitor and ensure her story is told to our children’s children.”