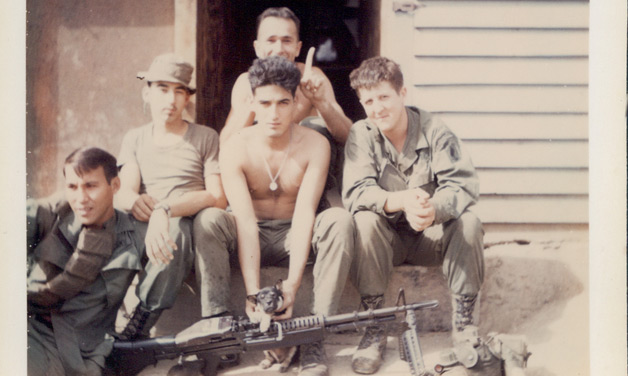 Pete Peterson was recruited for the combat trackers while recovering at a U.S. military hospital in Japan during the fall of 1968. It wasn’t a hard sell for the two trackers who shared his hospital ward. Peterson had lost several friends in a firefight with the North Vietnamese while he was sidelined with an ankle injury. “The tracker’s job was to hunt down the enemy,” says Peterson, who had been serving with an infantry company. “I liked the idea of that. I wanted some payback.”

When he returned to Vietnam, Peterson joined one of the elite Army teams charged with finding an enemy known for melting into the jungle, gathering intelligence, and searching for missing U.S. soldiers and pilots. Although the secrecy surrounding the combat trackers has meant their accomplishments were all but lost to history, they were so successful that the North Vietnamese army put a bounty on the five-man teams and their Labrador retrievers. That bounty was a point of pride with the trackers, part of what made the work both arduous and gratifying.

“It was easier than being in a line company, plowing through the jungle, waiting for something to happen,” Peterson says. “At least with the trackers, you knew something could very well happen. It kept you on your toes.”

But that constant tension was also exhausting. “We were busier than any other infantry operation,” says Perry Taitano, who was a dog handler with Peterson’s team. “We were always on the front line.”

“Probably half the NCOs flunked out ... they couldn’t take it.”
Peterson learned the tracking trade on the job – but that was the exception. The British military secretly trained the first wave of U.S. tracker teams deployed in Vietnam. The U.S. Army later established its own training school at Fort Gordon, Ga.

The British had developed jungle-savvy combat tracker teams to deal with communist insurgents in Malaysia in the 1950s. Each included a visual tracker, a dog handler and Labrador retriever, a cover man, a radioman and a team leader. Their success depended on an ability to move quickly and avoid detection. That often meant running for miles to catch the enemy and maintain the element of surprise.

“The British had figured out how to out-guerrilla the guerrillas,” says Susan Merritt, wife of combat tracker Frank Merritt, and author of “Seek On!”, a history of U.S. combat trackers in Vietnam.

The Army contracted with the New Zealand Special Air Service (SAS) to train American trackers, and with the British to supply tracking dogs, beginning in 1966. Soldiers were shipped to British Jungle Warfare School in Malaysia for an intensive eight-week field course. They traveled from Vietnam to Malaysia in civilian clothes on temporary U.S. State Department passports – all part of the secrecy that surrounded the program.

Dog handlers were paired up with a dog and trained separately for most of the course. The other soldiers learned visual tracking, no matter what role they would assume once the team was in combat. The two groups came together for their final two weeks in Malaysia.

The school was brutal. Each trainee had to run up a hill with someone on his back, then kick a latrine hard enough for the SAS instructors to hear it. “That latrine was made of ribbed metal, and you could hear it for miles, yet the instructors would always say, ‘I did not hear you hit it,’ and you found yourself running up the hill again,” says Charles Steward, who went through the school in 1968. Soldiers, working in groups of six, were also required to run through a field carrying a telephone pole. And that was only part of the endurance test.

“The philosophy was if you weren’t physically fit, you couldn’t follow that dog through the jungle,” Steward says. “Probably half the NCOs flunked out and went back to Vietnam. They couldn’t take it.” Trainees also washed out if they didn’t quickly learn visual tracking. Overall, 12 of the 40 men Steward went to Malaysia with failed.
That rigorous preparation paid off. “We were probably the best-trained U.S. Army soldiers in the field at the time,” says John Dupla, who trained in Malaysia in 1967. “We knew what we were doing and we had the confidence to do it.”

“The jungle belonged to them.”
Tracking teams were assigned to combat divisions and brigades but were dispatched wherever they were needed. Combat trackers were summoned when U.S. forces were ambushed or engaged and then lost contact with the enemy.

The teams traveled by helicopter and were often greeted by hostile gunfire. “From the time the helicopter started to land, I was waiting for a bullet to hit me,” says cover man David Herbert, who, ironically, was dispatched to tracker training after washing out of NCO school. “We didn’t wear flak jackets or steel pots. They were too heavy and hindered you more than helped you.”

Unlike scout dogs and their handlers, combat tracker teams worked well ahead of infantry units. The visual tracker or the dog and handler led the team, depending on tracking conditions and whether there was clear evidence – such as a trail of blood – indicating the direction the enemy had gone. The cover man was always second in line, protecting whoever was leading the team. “If you got into something, you shot your way out,” Herbert says. “The level of constant stress was unreal. I walked out after one firefight, and I couldn’t feel my feet touch the ground.”

Ideally, the tracker team located the enemy and then called the regular troops. “If things worked out OK, the dog alerted, we stopped, called the infantry forward, they re-engaged and the fight was on,” Steward says. “More times than not, we would take a few rounds before the infantry got up there. Fortunately, my team never lost anybody. A lot of times we got lucky. Very lucky.”

Although records are incomplete, it appears that 43 of the approximately 750 combat trackers deployed in Vietnam were killed in action, Susan Merritt says. That casualty rate would have been much higher if not for their superior training. “The jungle,” she says, “belonged to them.”

The trackers also credit the dogs for repeatedly saving their lives – alerting them to enemy soldiers and to the booby traps that the North Vietnamese were known for leaving behind. The British developed Labrador retrievers as jungle trackers in part because the easygoing dogs could adapt to different handlers as soldiers rotated out of teams at the ends of their combat tours, Merritt says.

“There’s something about a Lab that makes it a great tracker,” says Taitano, who was the least likely dog handler. He grew up in Guam, where dogs are considered a nuisance, not pets or working animals. “When we see a dog in Guam, we kill it,” he says.

But a black Lab named Moose captured Taitano’s heart. “I had a best friend,” he says. “It’s a privilege to work with a dog who gives you unconditional love.” He tried to buy Moose at the end of his tour so he could take his tracking companion home. But the Army wouldn’t allow the dogs to leave Vietnam because of the risk of spreading diseases they acquired in Southeast Asia. That still bothers the trackers.

“The terrible thing is, the dogs were left behind – and the Vietnamese eat dog,” Peterson says. “That was always gut-wrenching.”

“We saved lives by not letting the enemy get away.”
Once the North Vietnamese caught on to the tracker teams, they tried to develop ways to confuse them. A withdrawing enemy unit would have a couple of soldiers go off in a completely different direction, even dropping articles of clothing and leaving other obvious signs, Dupla says. His team lost a visual tracker and a cover man to enemy snipers as they checked out one of those false trails – the only men from his team who were killed during his tour.

The North Vietnamese also placed a bounty on the trackers rumored to be the equivalent of three or four years’ pay for an enemy soldier.
“It made you feel good at the time,” Peterson says. “But it caught up with you afterward.”

Sometimes the greater risk was friendly fire. One evening, Dupla’s team found itself between the North Vietnamese contingent it had been tracking and an American unit it didn’t realize was in the area.

“We stopped to call for a helicopter,” Dupla says. “And all hell broke loose.” He ended up with a piece of shrapnel in his shoulder from a grenade that could have come from either an American or a North Vietnamese soldier. “That was close,” he says. “A couple of inches’ difference, and it would have hit my head.”

The infantry units also often misunderstood the trackers’ role. In many cases, commanders wanted to use the team to walk point, not chase down the enemy. “I think it was just that a lot of companies and platoons had never heard of us, so they had no idea how we operated,” Peterson says.

The U.S. contract with the British Jungle Warfare School ended in 1969, and the tracker training program at Fort Gordon opened. Steward taught at the school for a year, then returned to Vietnam for a disappointing second tour with the trackers from 1970 to 1971.

“Vietnam was a different place,” Steward says. “The Americans were trying to turn more responsibility over to the South Vietnamese army to lessen U.S. casualties.” There was less follow-through when the trackers engaged the enemy, he adds. “It was not a good experience.”

The Army discontinued the program in late 1971, and the quiet legacy of the combat trackers faded. “We saved lives by not letting the enemy get away,” says Peterson, who started as a cover man and became a team leader. But the secrecy of the program cost the trackers recognition.

“We had a lot of kills, but the credit always went to the infantry unit we were with,” adds Steward, who went on to make a career in the Army and retired as a sergeant major. “And we’re so small, we’ll never get the notoriety the Special Forces did.”

But the combat trackers are leaving a trail. The U.S. Army Combat Tracker Team Memorial was erected at Fort Benning, Ga., in the early 2000s. The Merritts also created a website for the Vietnam combat tracker teams, combattrackerteam.org, more than a decade ago. That helped a couple of military gear collectors reunite Herbert with his M65 field jacket, with its rare combat-tracker shoulder patch intact, after it turned up in a North Carolina thrift store in 2009. Herbert had loaned it to a friend for a hunting trip in the late 1970s and never saw it again.

The trackers have also been holding annual reunions since 2000. They will dedicate a stone bench, engraved with the names of trackers and dogs killed in action, at the Ohio Veterans Memorial Park in Clinton in June, thanks to the efforts of tracker John Carroll.

Beyond these clues, however, the trackers remain as mysterious to the American public and many of their fellow soldiers as to the North Vietnamese they surprised.
“There’s so many people who have no idea about the trackers and what we did,” Steward says. “Our legacy will never be known.”