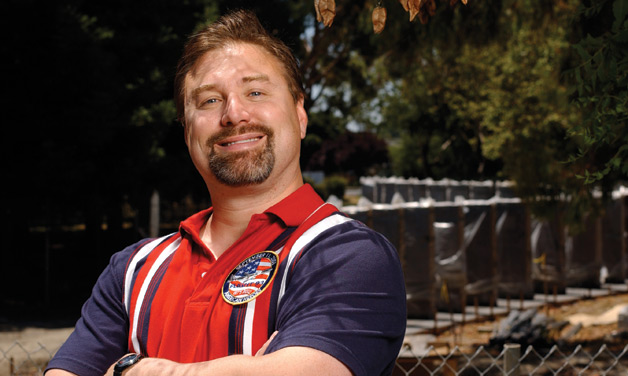 In 2002, a visit to Ground Zero left Michael L. Emerson frustrated. The devastation of 9/11 still haunted New York and the Pentagon, but he heard few people talking about the 40 Americans who died in a crash near Shanksville, Pa., after fighting their plane’s hijackers. Emerson returned to his home in the San Francisco Bay area, determined to build a local memorial to the heroes of Flight 93. His success earned him a spot on the steering committee for the Flight 93 National Memorial and invitations to build or support other memorial projects around the country.

A Marine Corps veteran of Desert Storm and a member of American Legion Post 649 in Castro Valley, Calif., Emerson recently talked with The American Legion Magazine about his decade of planning, designing and contributing to some of the nation’s newest memorials.

What memorials are you working on now?
I’m currently designing and building a 9/11 memorial in Hayward, Calif. I’m also helping build a Cold War national memorial in Las Vegas, and since I am a 60-percent disabled veteran, I wanted to help build the American Veterans Disabled for Life Memorial in Washington, D.C. Now, the one in Washington, I’m just on the periphery; I’ve helped collect funds and support it any way I can. The one in Nevada, I’m actually on the committee. I helped finalize the design, and I’m going to be helping collect donations to pay for it.

I have a lot of support from friends – civilians, active duty, veterans. Not everybody can do as much as I do, but they often do one thing that gives me time to do other stuff or support me some other way. Some people’s hobby is fishing or golf. Mine is designing and building memorials.

How did your first project, the Flight 93 Memorial in  Union City, Calif., lead to others?
It took me five years to build that memorial, and I learned quite a lot about the process, whether it’s the type of materials or load bearing for earthquakes we get here in California. I don’t have any sort of engineering or architectural degree, but I’m not a dumb person, and I just learned from all these really great people. Two different companies – one out of Elberton, Ga., and one out of Wausau, Wis. – donated the granite, which would have cost a fortune, and yet they donated it all. There was not one penny that had to be paid to build the memorial. Everything from the labor to the materials was completely donated.

When we dedicated the memorial, the National Park Service came, which was surprising to me. After, I had a small reception at my house, inviting the family members and a few other people, and the National Park Service guy came, too. After they all left, he stayed and said, “We’re impressed with what you did here. We would like to have you help us build the Flight 93 National Memorial in Shanksville, Pa.”

I was greatly honored and immediately agreed.

When that one was done, my VFW and American Legion posts came to me and said, “Michael, you’ve got these connections. You know what you’re doing. Will you design and build a veterans memorial here in Castro Valley?” I said, “Absolutely.” For this one,

I used what I learned. I designed everything, I got all the contractors, but I said, “We’re going to collect all the money, all the materials, and instead of dragging it out for five years, I want it done in two or three months,” and that’s what we did. We pulled the trigger in June and it was done by the end of August. It wasn’t in the way of people. We built an extremely beautiful memorial that everyone says should be in Washington, D.C. I’m very proud of that.

In 2008, I went to the national convention in Phoenix, where the Legion passed a resolution that I wrote supporting the building of the Flight 93 National Memorial in Shanksville, and thousands of dollars have been donated by Legion posts around the country to help build it. The Legacy Run had (the site) as a stop a few years ago, before the memorial was even built. It was great knowing the national commander and the Legacy Run guys went there.

What inspires your designs?
I won’t say that I’m not going to cherry-pick ideas. With the Flight 93 Memorial, what inspired me was the bombing memorial in Oklahoma City and its individual chairs with lights underneath. At the same time, I don’t want to copy someone else. I want it to be unique, but in a traditional sense. My motto has always been “elegance in simplicity” – elegant, not super-busy. Some people have said, “You should do a fountain” or “You should do an eternal flame.” When they work, they’re beautiful, but I want to build something that can be easy for a city to maintain.

I also try to make sure that it allows people to just be able to contemplate. There’s a lot of symbolism in the Flight 93 Memorial, where each of the stones’ fronts are polished, but the sides and backs are left unfinished to signify unfinished lives. The front of each has a titanium stainless steel mirror. It’s a way for people to reflect: “How would I have reacted?”

At the Castro Valley memorial, we added four metal skateboard stops to the top of each bench. But on the POW bench, there’s one missing, signifying a missing man. I try to make people think, but I also want it to be beautiful.

How much thought do you give to the future of the memorials you help build?
It’s definitely something I took into account prior to doing my very first one. With the Flight 93 memorial, I leased the land for $1 a month, so it was like my property. At the dedication, I gave it back to the city. The memorandum of understanding states very clearly that the city will maintain the memorial in perpetuity. I make these memorials out of granite and concrete so they will last for generations. My goal is for them to last at least 300 years. For Flight 93, I had $28,000 left over in cash donations that I gave to the city as a kind of maintenance fund. We’re currently collecting a maintenance fund for the veterans memorial.

I have two sons who will be 14 and 10 this year. We go quite often to the memorials to pick up trash and make sure there’s no graffiti. My oldest, Nickolas, turned to me and said, out of the blue, “You know, Papa, when you die I’ll take care of this for you.” To have my 14-year-old tell me that gives me hope for the future of our country.

I’m proud to do these memorials, but I don’t get paid a dime. I get paid in thanks, a feeling of accomplishment and pride. I’m inspired by them, by the people who help me, and by the people they’re built to honor.

Describe the Hayward 9/11 memorial.
I’ve learned what materials give you more bang for the buck. I’m also trying to get as much as I can donated. I’m going to incorporate a lot of granite and concrete. I don’t use bronze or materials that could be stolen or damaged. I’ve built a lot of relationships with contractors and manufacturers. The same company that donated the 40 granite stones for the Flight 93 memorial in Union City has told me it will donate more than half the granite I need for this new memorial. And almost everyone who helped me with the Castro Valley Veterans Memorial that we built and dedicated on Veterans Day has signed on to donate and help build this 9/11 memorial. We put the donors’ names on the website, we engrave their names in granite on the memorial, so people can come with their families and say, “Look, I helped build this.” It’s a way to be more connected to the community, connected to the nation and connected to history.

What advice would you give to an individual or group wanting to build a veterans memorial?
Call or email me! I’ll walk you through the process. The most important thing, in my opinion, is to get good people around you. Get a bunch of people who are like-minded behind you. You can’t expect to have it finished in just a few months or a year. It takes time to collect money, get permits and all that. It’s worth the time, but you have to be patient and understanding with other people, especially if they’re volunteering.

I think a key ingredient is to have everything ready before you start. Leave the space exactly the way it is until you have all the money, all the designs, all the people in line. Get it done as quickly as possible so there isn’t too much inconvenience to the community. You want its support.

It’s not as hard as you think. One of the nice things about 9/11 memorials or veterans memorials is that no one says they’re a bad idea.