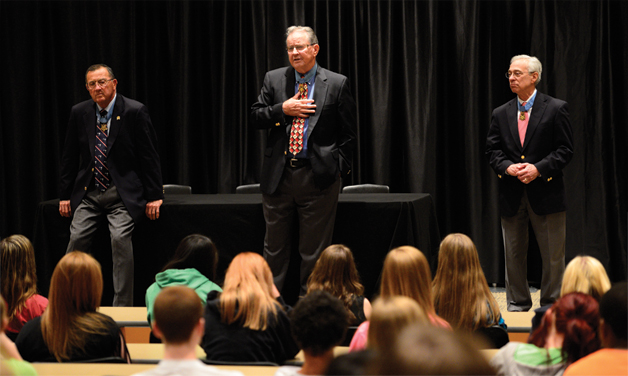 Staff Sgt. Webster Anderson suffered severe wounds to both legs in an assault by the North Vietnamese when two grenades exploded at his feet. Unable to stand, he continued to fight, attempting to toss away another grenade that landed near a wounded member of his gun crew. When it exploded, Anderson lost an arm, but he’d saved his men.

“I flew in and picked up what was left of Webster after he had inspired his men to defeat the communists,” recalls retired Maj. Gen. Patrick Brady, a Dustoff helicopter pilot during the Vietnam War. “Miraculously, the medics saved his life, but his efforts to save his men cost him both legs and an arm, and earned the Medal of Honor. Webster and I became close, and some years later we were speaking at a school in Oklahoma. One of the youngsters asked Webster if he would do what he did again, knowing what it would cost him.

“Webster’s answer moves me to this day. He said, ‘Young man, I only have one arm left, but my country can have it any time they want.’”

Such extraordinary stories of courage and heroism set apart the small group of Americans who wear the nation’s highest military decoration. Though Anderson died in 2003, Brady and the other 80 or so living recipients of the Medal of Honor are still inspiring students with their stories through the Congressional Medal of Honor Foundation’s Character Development Program (CDP).

“There is no future for America unless we grow patriots – not just people who say they love America, but people who support and defend America,” Brady says. “We are very interested in taking our life experiences and passing them on to young people in an effort to improve their lives as well as strengthen the nation.”

Vargas, a retired Marine who went on to complete master’s and doctorate degrees, admitted that he made mistakes as a youth. “I slipped and fell a couple of times,” he told a crowd of 100 students and staff members. “So don’t be afraid. If you have a problem, work it out with your teacher and each other. Life is a challenge. Start now and dream what you want to be someday. Study hard, believe in yourself, and be yourself.”

Jacobs challenged students to improve themselves and volunteer in their communities.

“I am someone who believes in universal service,” said Jacobs, who now teaches at West Point after a 20-year Army career. “Everyone who lives in a free country should serve in some way. The only reason we enjoy our freedom is because there are other people who feel the way we do. The only way to maintain our freedom is to honor those who came before us and to educate ourselves.”

After the presentations, students approached Brady, Vargas and Jacobs for handshakes, hugs, autographs, photographs or sometimes just a simple “thank you.” Then three graduating seniors signed their military enlistment papers as the Medal of Honor recipients looked on.

Bentonville graduate and West Point cadet Sarah Galloway says the CDP presentation continues to inspire her. “I have my moments of doubt about what I may be facing. But these stories reassure me that this is what I should be doing.”
Galloway, whose father has served with the National Guard for two decades, was raised on the ideals of patriotism and service to country. Still, the story of Webster Anderson’s sacrifice lingers in her mind.

“He would give anything to protect his country and his fellow soldiers and people at home,” she says. “It’s a hard thing to imagine, but it gives me inspiration to do what I need to do for my country. I hope that one day I can be that brave for my country, too.”

‘We challenge everybody’ The average age of a Medal of Honor recipient is 78. Brady, Jacobs and Vargas joked in Bentonville that their combined ages make them older than America itself. The recipients believe it’s imperative they tell their stories – and quickly – at schools throughout the United States and DoD installations overseas. That’s where Jennifer Lennon comes in.

“The sense of urgency is there to get this program into schools while they (older recipients) can still help me and be a part of it,” says Lennon, the Congressional Medal of Honor Foundation’s vice president of development and education. “From their perspective, and from (the perspective of) others in education, this is sorely needed. It’s about time. For the recipients, it’s about urgency. For the nation, it’s about doing the right thing and getting values in place that are essential for the happiness of our children and to ensure democracy moving forward.”

Lennon joined the foundation about seven years ago and learned that there were more than 100 video vignettes of recipients telling their stories. She pushed for developing them into an educational tool that would teach American schoolchildren the value of the Medal of Honor. Her idea eventually blossomed into the education outreach program, which began in Erie, Pa., and has reached more than 9 million students across the United States, Europe and the Middle East.

Within two years, Erie educators put together CDP’s lesson plans. Lennon and Jacobs say they knew the program was having a positive effect when they reviewed the progress with 35 or so students who had been involved with it for a year.
One student, raised by a Muslim father and a Southern Baptist mother, described how the CDP made a difference in his life.

“Because of my father’s faith, I was raised to think of my God first and my country second,” Lennon recalls the student telling Jacobs. “I was honoring my heritage, so I really didn’t participate in the Pledge of Allegiance or sing the national anthem because I didn’t want to disrespect my father. Then I took this course. It’s men like (Jacobs) who gave me the choice to participate or not. And now I choose to stand when the pledge is read, and I am not disrespecting my father. I am honoring this country.”

The Erie experiment prompted the foundation to create a series of free downloadable resources – videos, training modules and lesson plans – for schools to use. Lennon, MOH recipients and others help train the teachers, but it is up to schools to decide how to implement the CDP – in history classes, English classes or after-school programs.

The focus is service to community. “We don’t mean putting on a uniform and serving the country,” Lennon says. “This program is not about glorifying war. The guys are dead set against that message. We challenge everybody, and the students are a target to serve universally, whether it be Habitat for Humanity or a soup kitchen or being a teacher – doing whatever they think is their calling, so that they are making a difference and helping people. Every child we touch, we have the potential for success.”

‘Flooded with requests’ The CDP is gaining traction in schools nationwide. In Tennessee and Georgia, efforts are underway to include the program in every school district’s curriculum. Knoxville took the lead in bringing the CDP to its schools, since the city will host the 2014 convention for Medal of Honor recipients. In support, a group of four students from Central High School in Knox County crafted a non-binding resolution calling for the CDP to be taught in all Tennessee schools. The state legislature passed the measure in April.

Don Naab, director of education programs for the 2014 convention, says the students’ success is what the CDP is all about.

“This whole program is designed to get kids to get engaged and do their jobs in their communities,” he says. “That’s what these recipients do (through their continued community service). The kids saw an opportunity to do their job – to write a resolution – and take it to their senator, take it to Nashville, where it was reviewed, approved and signed by the governor.”

Teachers and administrators in Nashville, Knoxville, Chattanooga and other cities across the state have been trained in the CDP curriculum. In addition to public schools, the program is quickly finding its way into private schools, home-schooling groups and Boy Scout troops. When a school meets specific criteria, it receives an Uncommon Valor Award, special flag and certificate, and a visit from a Medal of Honor recipient.

Cedar Bluff Middle School in Knoxville was the first to qualify for the award, Naab says. “Medal of Honor recipient Bruce Crandall was there at the presentation,” he says. “He presented the flag to the school, addressed the student body and met with the kids. It’s been a great PR tool for us. We’ve been flooded with requests from other schools about how to get a Medal of Honor recipient to visit. We say, ‘One way that you can get that is by earning it through the Character Development Program.’”

‘Stacks and stacks of letters’ After a deployment to Afghanistan and re-entering civilian life as a school administrator, George Chip learned about the CDP curriculum. His connections in the Georgia National Guard led to an arrangement in which the Guard purchased a CDP kit for every middle and high school student in the state.

“As a National Guardsman, my job is to protect the citizens of Georgia,” says Chip, assistant director of the Douglas County School System, which has 25,000 students in 30 schools outside Atlanta. “How better to protect them than by teaching our young people character development skills so their character might improve?”

Chip embraces the program because of its core messages and values. “Our young people need heroes,” he says. “We all need somebody who will be a hero to us. Unfortunately, some of the heroes young people look up to today are misguided. You will see the tragedies of some entertainers who are mercurial in their personal lives. On the other hand, the Medal of Honor recipients – their heroism goes beyond what most human beings could endure, and somehow they survived it. And to hear them tell their stories is remarkable.”

Chip hopes to see the program adopted beyond his district and even outside Georgia. “I hope this will inspire other schools and other groups to get involved,” says Chip, a member of American Legion Post 145 in Douglasville. “Legionnaires could help by just talking about the program with boards of education, principals and others. When you talk about something enough and people realize it’s the right thing, they will become engaged. Just that simple point of discussion could make things happen.”

The feedback from students is incredible. “I have stacks and stacks of letters that we have received from classrooms,” Brady says. “Amazingly, the kids remember what I said to them about courage and sacrifice. We’ve had kids start crying. We’ve had kids come up and hug us. They line up to get their picture taken with us and get our autograph and things like that. The feedback is voluminous.”

To date, the CDP program has reached millions of students, but that is only a start.

“Success to me is to have this program in every middle school and high school in America, and the DoD schools overseas, too,” Brady says. “We don’t have all the schools yet, but we will. And even if we don’t live long enough to make it happen, whoever comes behind us can make it happen.”

Henry Howard is deputy director of The American Legion Magazine.