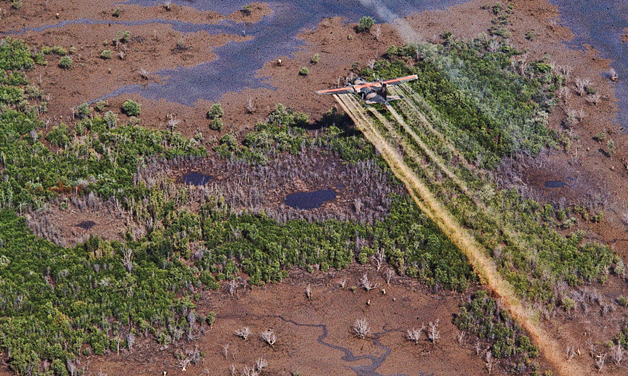 When Mary Warner’s husband became too sick to care for himself, she took early retirement and a reduced pension to attend to his needs. It was a significant financial risk. The Warners thought they could squeak by, given Philip’s Agent Orange stipend and the promise that Mary could count on VA survivor benefits if something happened to her husband.

Soon after Philip died of kidney failure in September 2011, VA decided the Vietnam War Navy veteran shouldn’t have received a decade’s worth of compensation for illnesses the agency acknowledges are caused by Agent Orange exposure. In fact, VA now questions whether Philip was in Vietnam at all, despite service records he provided when he filed his first claim in 2001.

“I think it’s unethical for them to come back and say he was erroneously awarded Agent Orange benefits when he’s not here to speak for himself,” Mary says. “Why didn’t they ask these questions when he was living?”

Although VA trumpets its efforts to resolve 230,000 new  Agent Orange claims in recent years, its track record remains contradictory and confusing, particularly for servicemembers who cannot prove they set foot in Vietnam. In 2012, for example, one Blue Water Navy veteran’s leukemia claim was approved while an identical claim from another sailor who served on the same ship at the same time was denied. Widows like Warner find themselves in a fight for survivor benefits after their husbands die of Agent Orange-related causes. Thousands of Brown Water veterans who served on Vietnam’s rivers and inland waterways have been waiting more than three years for VA to review their cases after a U.S. senator discovered their claims had been denied without checking records of where they served.

“Thousands of veterans exposed to the toxin are left behind when it comes to vital treatment and benefits,” American Legion National Commander Dan Dellinger told a joint hearing of the U.S. House and Senate Veterans’ Affairs committees in
September. “Studies indicate that Blue Water Navy veterans may have experienced higher exposure rates to Agent Orange than those who were on the ground, due to water-desalination systems on the ships. This has never been satisfactorily addressed by VA.”

Frustration with VA’s treatment of Vietnam War Navy veterans continues to grow. Groups including Blue Water Sailors of the Vietnam War are pushing for federal legislation restoring benefits to all Vietnam War veterans suffering from Agent Orange-inflicted illnesses. H.R. 543 would reverse a 2002 rule change by the Bush administration that excluded veterans who couldn’t prove they had “boots on the ground” in Vietnam. Prior to that, all Vietnam War veterans who contracted certain diseases had qualified for benefits under the Agent Orange Act of 1991.

Two other veterans advocacy groups filed suit in August to force VA to provide Agent Orange benefits to Navy veterans who served off the coast of Vietnam during the war and are now suffering the consequences.

Mike Hodge is one of those sailors. He served with the gunnery crew on USS Diamond Head, which delivered ammunition to other ships along the Vietnam coast from March to December 1967. Hodge developed Type 2 diabetes in the 1970s, despite being in his 30s and having no family history of the illness. That was followed by neuropathy, ischemic heart disease, blood clots in his lungs, a stroke and an abdominal aortic aneurysm. He’s been unable to work since 2008.

“I felt like my body was giving out,” says Hodge, who lives with his wife, Sharon, in an apartment in Sarasota, Fla.

Hodge has filed four Agent Orange claims since 2001. All were denied. “This is so absurd it’s ridiculous,” Hodge says. “Here I am stuck at home. I have to put my wife to work to pay the bills.” Sharon works as a nursing assistant six days a week – including a 16-hour shift on Mondays – to help support the couple.

“It’s hard, really hard,” says Sharon, who has spent countless hours working on her husband’s claim. That includes unsuccessful attempts to reach members of Florida’s congressional delegation for help. “If you were in the Blue Water Navy, nobody wants to talk to you.”

Hodge, meanwhile, says the dozen-year claims ordeal makes him bitter. “I did my duty,” Hodge says. “Now they are telling us our service wasn’t worth a s**t.”

VA, however, hasn’t treated all Diamond Head members equally. Bob Webb was granted Agent Orange benefits for chronic lymphocytic leukemia in August 2012 after pursuing his claim for more than two years. He succeeded only after thorough research and persistence, he says. That included hand-carrying information to his local VA office in Wichita, Kan., more than two dozen times. “They hope you give up,” says Webb, who was a gunner’s mate on Diamond Head in 1967. “You have to stay on it.”

In the last packet of supporting material Webb delivered to VA, he included a note that said, “I didn’t ask to get chronic lymphocytic leukemia. I hope you find in my favor.” He and his wife cried when they received notice that VA had approved his claim.

But the chronic lymphocytic leukemia claim of another sailor who served with Webb on Diamond Head during that same Vietnam tour was denied. Steve Voloshin was diagnosed with the cancer in 2004. He filed his Agent Orange claim with the VA office in Denver in 2011. That included a letter from his oncologist stating that his leukemia was likely caused by Agent Orange exposure – to no avail.

“VA said each case is different,” says Voloshin, who lives in Loveland, Colo. “But we were on the same ship at the same time and we have the same diagnosis.”

Voloshin is appealing his case and searching for additional evidence to back his claim, including deck logs that will show Diamond Head serving in Vietnam’s territorial waters. “I’m glad they granted Bob’s claim,” Voloshin says. “But I feel slighted.”

Veterans advocates say such disparities are common. “The whole claims system is a mishmash, with each VA regional office doing whatever it wants to do,” says Bill Miltenberger, founder of Blue Water Sailors of the Vietnam War. But there’s a larger problem as well: “(VA) ignores common sense, science, facts and maritime law when denying the majority of those Agent Orange claims.”

VA said it could not answer questions for this article because its funding had been interrupted by the government shutdown.

Meanwhile, Agent Orange claim disparities play out in other ways. VA rejected Pat Rankin’s initial claims after doctors found a tumor at the back of his mouth more than two years ago. Agent Orange benefits are granted to Vietnam War veterans with cancers of the lower respiratory system – the larynx, trachea, lungs and bronchus – but not the upper respiratory system, says Rankin, who served on USS Lloyd Thomas. So he gathered information from the nation’s top medical schools to demonstrate what should have been obvious: Agent Orange-contaminated air passed through a person’s nose and mouth on its way to the lungs and other areas VA considers the respiratory system.

“How can they say this isn’t a respiratory cancer? The tumor was in a sinus cavity in my mouth,” says Rankin, who lives in Moorhead, Minn. In addition, Lloyd Thomas has been added to VA’s official list of Brown Water ships – vessels that entered rivers and inland waterways in Vietnam and were contaminated with the drift from Agent Orange spraying.

After appealing his case with the help of American Legion service officers, Rankin now has a 30 percent Agent Orange disability. But his claims for heart disease, high blood pressure and other issues are still pending.

Thousands of other Brown Water veterans aren’t getting any answers. In September 2010, then-Sen. Daniel Akaka asked VA to review nearly 17,000 Brown Water cases after learning it had rejected the claims without reviewing the veterans’ service records. In April 2011, VA said it had examined 6,700 cases. In the ensuing two and a half years, VA has repeatedly been unable to provide the status of the remaining 10,000 claims.

This offers little hope of a timely resolution for a widow like Mary Warner, who is on a tight budget while she works with a Legion service officer in Grand Rapids, Mich., to appeal the denial of her survivor benefits. Her husband served on USS Constellation during the Vietnam War. He was diagnosed with Type 2 diabetes in 1984 even though he was not overweight, regularly exercised and did not have a family history of diabetes. “It’s not the typical diabetic scenario,” Warner says.
Philip was granted a 50 percent disability rating in late 2002 for diabetes and neuritis. That was upgraded to a 100 percent rating in 2007 after he developed kidney disease.

“I’m so thankful he had VA benefits because our medical bills would have been astronomical without them,” Warner says.

But Philip was diagnosed with oral cancer in 2009 and died of kidney failure two years later, Warner says. When she contacted VA, she was told she wouldn’t receive survivor benefits, currently worth about $1,200 a month. Among other things, VA claims her husband’s death wasn’t connected to Agent Orange exposure.

Warner is left worrying about her financial future, given that she left her job as a postal clerk when she was 58. “I wouldn’t have retired early to take care of Philip if I had known,” she says. She was already looking at a reduced pension because she was hired by the U.S. Postal Service after it trimmed its retirement benefits. And at 63, she says it won’t be easy to find another job.

“I wonder,” Warner says, “how many other veterans and families are left behind.”