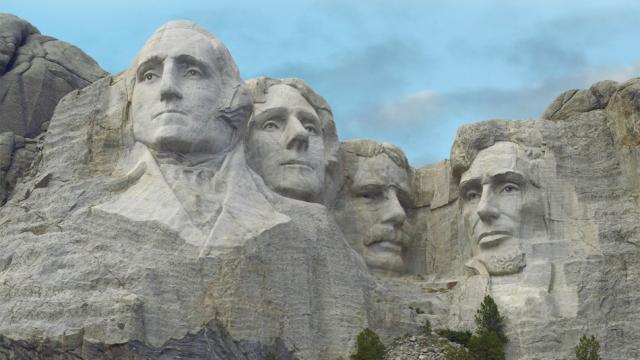 The idea for Mount Rushmore was conceived in 1924, when South Dakota’s state historian contacted sculptor Gutzon Borglum about creating a sculpture out of a rock formation in the Black Hills. Borglum liked the idea and proposed that former presidents George Washington and Abraham Lincoln serve as the main subjects for the massive mountainside sculpture. That initial idea grew to include Thomas Jefferson and Theodore Roosevelt.

Mount Rushmore is many things – monument, memorial, landmark – but the towering sculpture of those towering leaders also reflects something more. As Borglum put it, Mount Rushmore “bears witness, carries the likeness, the dates, a word or two of the great things we accomplished as a nation.”

FOUR GIANTS. Washington was more than just a president. He was a warrior, his silhouette reminding us that our liberty and independence come at a price – and that the best way to avoid paying that price in blood is to pay it in preparedness. “There is nothing so likely to produce peace,” he counseled, “as to be well prepared to meet an enemy.”

Washington also represents the birth of what he called a “nascent empire” – a global power. Yet his stoic gaze warns against “entanglements” with foreign lands, providing a constant reminder that America is exceptional. As he put it, “Our detached and distant situation invites and enables us to pursue a different course” than the Old World.
Washington himself pursued a different course. So revered was he that he could have been president for life or some sort of benign military monarch. If anyone was bigger than the republic, it was Washington, the father of our country. But his actions made it clear to his successors that no president is bigger than the republic. He resisted the temptation to amass personal power and bowed to the rule of law, setting crucial precedents on executive power, time in office and civilian control over the military.

Jefferson represents America’s founding document, the Declaration of Independence, which declared to the world that “all men are created equal” and endowed by God with a right to life, liberty and the pursuit of what each defines as happiness. Jefferson’s masterpiece was more than America’s birth certificate, more than an announcement that the New World was ready to govern itself. It was the flame that lit the furnace of what he called “an empire of liberty.” Indeed, Jefferson’s assertive foreign policy expanded America westward, defended U.S. interests on the far side of the world, and made it clear to friend and foe alike that America would fight for its rightful place among the nations.

Just as Washington set lasting precedents in how he left office, Jefferson set them in how he entered office. His election marked the nation’s first transfer of power from one party to another. It was a peaceful transfer, yet that was anything but inevitable. The election was bitterly fought, and the outcome was uncertain for weks. During the long stalemate, there was talk among Jefferson’s opponents of transferring presidential authority to a Senate designee or leaving the office vacant. There were even fears of civil unrest.

But Jefferson patiently waited for the system to work. After dozens of ballots, a majority of House delegations chose him to lead the nation.

“We are all Republicans, we are all Federalists,” he said poignantly in his inaugural address, thus laying the foundation for a political system where winners are not coronated like kings and losers are not treated like defeated enemies.

More than half a century would pass before the promise of Jefferson’s masterpiece was fulfilled.

“If God wills that it continue until all the wealth piled by the bondsman’s 250 years of unrequited toil shall be sunk, and until every drop of blood drawn with the lash shall be paid by another drawn with the sword,” he declared during his second inaugural, driving home his point and his own transformation by quoting Psalm 19: “the judgments of the Lord are true and righteous altogether.”

In abolishing slavery, Lincoln finished what was left undone at the founding. In laying out his vision for postwar peace, Lincoln reminded us of our responsibilities to those who fight and die for America: “to care for him who shall have borne the battle, and for his widow and his orphan.” And in preserving the Union, Lincoln transformed America from a collection of independent states into one nation – the “last, best hope of earth.”

Finally, Roosevelt embodies America’s entry on the world stage as a force for good. By building the Panama Canal, he connected east and west. By forging a truly global Navy, he wielded a “big stick” that projected U.S. power and deterred America’s enemies.

Indeed, his policies provide a timeless example of how to deter war by being fully prepared to wage it. “We infinitely desire peace,” Roosevelt declared, echoing Washington. “And the surest way of obtaining it is to show that we are not afraid of war.”

Roosevelt also taught his successors that global leadership demands more than pursuing simple self-interest, that in becoming a great power the United States should not stop being a good neighbor. So he challenged America to resist “coldblooded indifference to the misery of the oppressed.” Even when “our own interests are not greatly involved,” he declared, there are times to act “in the interest of humanity at large.”

Roosevelt’s was the last visage completed. The monument was dedicated just weeks before Japan’s attack on Pearl Harbor – a symbolic parenthesis to America’s time of inward-looking isolation.

HEADROOM? To the novice, there appears to be plenty of room for more super-sized sculptures to the right of Lincoln. But National Park Service officials note that Borglum’s son, who completed the project, concluded that the elder Borglum’s design exhausted the carveable rock. Moreover, geoengineers are unsure how new excavations would affect the existing sculpture.

Geology aside, the nature of the monument – four U.S. leaders representing four distinct eras of U.S. history – has always invited discussion about who else belongs on Mount Rushmore. Polls suggest that Americans are open to the idea of adding another face or two. Whether or not Congress ever moves in that direction, it’s an interesting thought experiment.

If the geological limitations could be overcome, the political limitations are certainly bridgeable. One can imagine a bipartisan compromise whereby a Democrat and a Republican are added.

A strong case could be made for two very different leaders: Franklin D. Roosevelt and Ronald Reagan. One expanded and wielded the powers of government to fight the Great Depression. The other declared, “Government is not the solution to our problem, government is the problem.”

Yet despite their philosophical differences, they had much in common. Both believed deeply in U.S. exceptionalism. Both were optimists and principled pragmatists, skilled politicians and media maestros. And both used these traits to rouse America from periods of self-doubt, rally the country against existential threats, defeat brutal enemy regimes and help it achieve aims arguably as consequential as those achieved by the four men immortalized on Mount Rushmore.

DEMOCRACY’S DEFENDER. Love him as the man who ended the Great Depression and gave every ounce of himself to defeat the enemies of democracy, or hate him as the man who created the modern welfare state and called Josef Stalin “Uncle Joe,” it’s difficult to describe FDR as anything less than a towering historical figure.

At home, FDR launched programs aimed at reversing the Great Depression, getting America back to work, creating a safety net for tough times and laying the foundation for economic progress – everything from emergency programs like the Bank Holiday, Civilian Conservation Corps, the Works Progress Administration and other agencies to enduring programs like the Social Security Administration and Tennessee Valley Authority.

Crucially, FDR’s efforts stabilized the country’s political-economic infrastructure. “It was Franklin Delano Roosevelt who gave hope to a nation that was in distress and could have slid into dictatorship,” Newt Gingrich once observed.

Indeed, Americans approved of Roosevelt’s unprecedented government expansion and intervention, as evidenced by his victories in four presidential elections.

Overseas, FDR built the great arsenal of democracy, walked the United States back onto the international stage and steered it to a position of unmatched geopolitical power. He envisioned a postwar world founded on freedom of speech, freedom of worship, freedom from want and freedom from fear. And along with another giant of World War II, Winston Churchill, he crafted the Atlantic Charter, the principles of which still underpin the international system.

FREEDOM’S FIGHTER. The economic crisis America faced in 1980 – double-digit inflation, double-digit unemployment, double-digit interest rates – was compounded by what then-President Jimmy Carter called an “erosion of our confidence,” a sense that the country was in the midst of irreversible decline.

Ever the optimist, Reagan believed that America’s greatest days were yet to come. The key, in his view, was reviving the economy by cutting nondefense spending, eliminating unnecessary regulation, revamping the tax code and unshackling America’s free-enterprise system.

The formula worked, as the nation enjoyed an unbroken 92-month stretch of economic expansion, an 18-percent increase in disposable income and a halving of unemployment.

With the economy reawakened, Reagan had the resources to outspend, outbuild, outmaneuver and outlast the Soviet empire. He challenged Americans to think of the Cold War not as a permanent condition to be managed but as a struggle between freedom and tyranny – one that could be won.

“The West will not contain communism,” he promised in 1981. “It will transcend communism ... a sad, bizarre chapter in human history whose last pages are even now being written.”

Toward that end, he put a halt to the moral relativism and accommodation that had set in after a decade of detente. Reagan rebuilt a demoralized military, armed anti-communist rebels, rolled back Soviet expansionism, challenged the legitimacy of the Soviet state and used rhetoric like a weapon: “Beware the temptation of ... blithely declaring yourselves above it all and labeling both sides equally at fault, to ignore the facts of history and the aggressive impulses of an evil empire.”

By the end of Reagan’s presidency, the Cold War had melted away. Nine months later, the Berlin Wall was gone, the Soviet empire was in retreat, and America had gone from a nation in decline into an economic-military-cultural colossus without historical parallel or geopolitical peer.

As President Barack Obama observes, “Ronald Reagan changed the trajectory of America.” That may explain why, for almost two decades, bills have been introduced in Congress to add Reagan’s face to Mount Rushmore.

BUILT TO LAST. There is more to this discussion than politics or geology, of course. Perhaps the real question is a philosophical one: is Mount Rushmore a finished product or a work in progress?

Paul Menard of the National Park Service says his agency considers it “a completed work of art.” Writer Ronald Fraser, who advocates adding FDR, counters that the monument is “a running chronicle of the American experience.”

Whether or not anything is ever added to  Rushmore, nature won’t take anything away from it for a very long time. Geologists estimate that its erosion rate is barely an inch every 10,000 years.

That’s a powerful metaphor for the timeless truths these men stood for – and very much in keeping with Borglum’s hopes. “Let us place there,” he wrote, “as close to heaven as we can, the words of our leaders, their faces, to show posterity what manner of men they were. Then breathe a prayer that these records will endure until the wind and rain alone shall wear them away.”