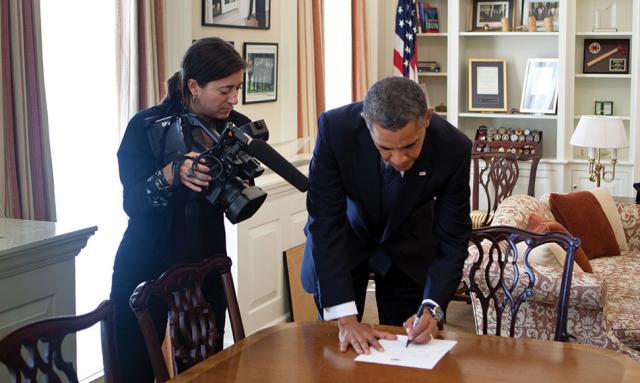 Hope Hall is the official videographer for the White House. But before she spent her workdays documenting the daily comings and goings of the president of the United States, she was a successful competitor in The American Legion’s Oratorical Contest. Hall won a competition in her local region in Connecticut in the 1980s, and eventually became a state and regional champion before falling in the national semifinals. She went on to become an award-winning documentary filmmaker, cinematographer and photographer. Since May 2011 she’s been working as President Barack Obama’s personal videographer. But no matter how much time she spends in the Oval Office among dignitaries and heads of state, Hall says she’ll never forget to give credit to the Legion’s Oratorical Contest and the life skills it taught her.

How did you get involved in the Oratorical Contest?

It all began with “Miss K.” If we are lucky in our school years, we are blessed with at least one teacher who becomes a true mentor and markedly influences the path of our life. Mine was Fran Kondziela at Roger Ludlowe High School in Fairfield, Conn., who inspires me to this day.

It wasn’t obvious, and had I been of a slightly different temperament I might have missed my chance. “Miss K ” came disguised as a tough cookie, and when I met her my freshman year I assumed that my nervousness around all things confrontational meant that she and I were bound for futures clearly, and safely, independent of each other. Oh, I was so wrong.

... Somewhere around the middle of freshman year, that scary theater director Miss K cast me as Scout in “To Kill a Mockingbird.” The production was surprisingly successful, took us touring around New England and winning regional drama contests, and was the beginning point of my long, four-year journey with Miss K that turned out to be more complex and full of possibilities than I could possibly have imagined.

She became my English teacher, my director in just about every play and musical she produced, my collaborator as she pushed me to take on the frightening task of choreographing shows (for seniors?!), and then senior year came the final nudge: she announced in speech class that we all had to write a speech about the Constitution that she would consider submitting to Tthe American Legion National High School Oratorical Contest.

After she’d read mine, she asked me to consider competing. I agreed, going against the sage advice of my parents not to do so because of their concern over what it would add to my already heavy work/activity load.

Where did you place in the national competition? How much scholarship money did you win, and what was your speech about? Describe the process of writing and giving your speech.

So, after a lot of work, off we went to the first event, a local competition within the state. I won! I beat the guys in sports coats, the junior debaters, the kids I never thought I could beat. We went on to the state championship, and won! Next we caravanned out to Staten Island to represent Connecticut in a tri-state regional competition. At this point I figured we were done – but no, I won, and next we would compete at Boston’s Faneuil Hall in the semifinal round before the national finals. The story ends there, where I lost to the Boston girl.

With regard to preparation, I remember starting to write my speech after reading an issue of Time devoted to the anniversary of the Constitution, and deciding to talk about where we were now in light of the 200 years that had ensued. My mentor, Miss K, was key – she coached me and challenged me to dive into issues of civics, government and the Bill of Rights as I wrote and rewrote my speech. And then she worked with me on my performance, staying after school to work with me on the extemporaneous portions. With regard to scholarship money, my memory is a little fuzzy, but I am going to say the total was $3,000 in bonds.

How did the speaking skills you learned and honed in the Oratorical Contest help you in your professional life in media? Did it teach you confidence?

Honestly, up until my teacher challenged me to jump into the competition, I don’t think I had ever thought of myself as being someone who could stand up and expound on my ideas spontaneously, especially around issues that I didn’t feel I knew that much about. Recitation is one thing, and a whole, interesting endeavor unto itself. Having done theater, memorized and performed lines of text for three years leading up to this experience, I felt pretty comfortable with the speech part.

But the extemporaneous part was where I feel like I really grew, and stretched myself in ways I hadn’t imagined I could. To speak about such topics, both weighty and lofty – justice, peace and the law – was something akin to being an adult with a critical mindset and a clear eye for the tangles of history. I can say with confidence that I didn’t think myself capable of that, and was moved, surprised and – yes, I’ll admit it – proud of whatever level of capacity I found in myself while attempting to be, well, an adult.

You mentioned that the scholarship money you received through the Oratorical Contest was invaluable to you in paying for college. Can you expand on what you meant by that?

I think a very short answer will do the trick here. I put myself through college with a combination of work study, grants and loans. The award money helped fill a hole and was totally invaluable. Thank you, American Legion!

In your opinion, what does a high school student gain from participating in the Oratorical Contest?

For one thing, in my opinion, any act of competing is in and of itself invaluable experience for high school students. Competition can be a way to play around with the vicissitudes of daily life to come, and the more practice one experiences in high school the better one gets to know oneself and what they can (and cannot) do.

It is hard to generalize what students gain from the Oratorical Contest, since it starts to become platitudinous and in fact really depends on (a) what they put into it, and (b) each contestant’s individual situation going into the competition.

So, with that, I would like to further respond to this question with my own very personal moment in the sequence of events which I think represents the kind of fulfillment that can result from this kind of experience. It’s a bit storybook but very true, and goes like this:

After I had returned from the Staten Island Tri-State, an announcement about my win was made over the PA system at school during homeroom. I thought I would be embarrassed if something like that ever happened. I had doubted I would be able to handle that kind of attention and support. I had arrived at my suburban high school as a tiny, foreign-seeming freshman among students who’d been in school together since the dawn of their education. I had moved from big city to big city around the world every few years of my life, and then arrived for high school in what was essentially a small town. I was different from day one: I dressed differently; I was nice to everyone (which in high school doesn’t really go over as well as you’d like); I made friends in cliques up and down the spectrum of high school cliquery, in glaring opposition to the hierarchy I was supposed to know implicitly; I worked hard and I think I sensed that most of the people I was with would stay in their small town or a variation of it, while I would move on for adulthood to places that felt more familiar to me in their diversity and cosmopolitanness, which meant I wouldn’t see most of these folks again.

So I didn’t have much to lose in being called out as a winner of a pretty arcane-sounding competition. But I still had my tenuous hold on my identity as I’d formed it there, and would have thought I would shrivel under the scrutiny. But as the announcement wore on into details and the upcoming competition had a time, a place and the possibility of a national win, my homeroom started to buzz, and I with it. Buses would be chartered, the voice went on, and anyone who signed up for the all-school field trip by such and such a time on such and such a date could come along and cheer on our Regional Winner Hope Hall, at historic Faneuil Hall, three hours away!

I changed over the course of that single, two-minute homeroom announcement over the PA. Or perhaps, more accurately, the course of the whole experience of the competition could be condensed into those few minutes, from shriveling to laughing alongside my classmates about the excitement of the adventure ahead.

Not everybody will have the same depth of experience from this program as I did, but no one who puts effort and enthusiasm into the process and puts themselves out there in competition will come up empty-handed.

Again, thank you, American Legion, and a very special shoutout to my buddies at Post 143, who came to every competition and treated me like I was one of their own.

Andy Romey is assistant editor for The American Legion Magazine.