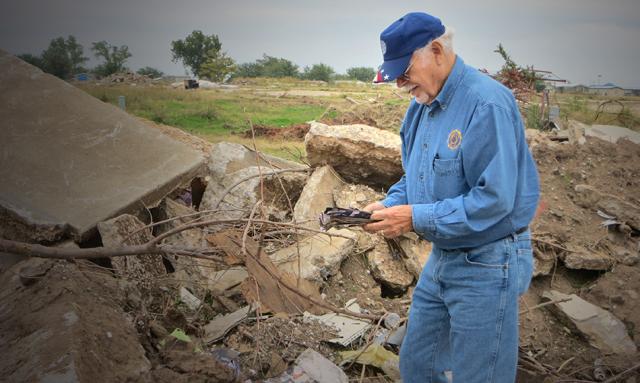 Jack and Stella Howard wrapped themselves in a comforter and huddled in their bathtub as an EF5 tornado approached their home in Moore, Okla. The roar of 210-mph wind was deafening. When the tornado hit, the two-story house collapsed. Under the rubble, the couple began to holler for neighbors, rescue workers – anyone who might hear them.

“The house just crumbled down around us like a tent,” Jack recalls, standing in the driveway where the May 20 twister tossed his truck one way and his wife’s car the other. “It was a miracle that we weren’t crushed. It’s an odd feeling being totally trapped under debris, not being able to move.”

Rescue crews freed the Howards after they had been stuck for more than an hour. Neither suffered serious physical injuries, but the massive tornado – which peaked at 1.3 miles wide – ruined everything they owned aside from the clothes on their backs, forcing the couple to start their lives over.

This was the second time the Howards lost everything when a tornado destroyed their home.

The aftermath was different in 1999, Stella says. “I was alone. It was the scariest feeling ever. I was hoping my husband would return to help. But no one was coming. No one was helping. I couldn’t call him. Phones weren’t working. Electricity wasn’t working. People were telling me to get out, but there was nowhere for me to go. All I had was a tank top and a pair of shorts. It was awful.”

The Howards had difficulty getting financial assistance after the first disaster. Beyond temporary shelter, “you were basically on your own.”

Last year was a different story. When the tornado ravaged Moore – a city of 55,000 residents located between Oklahoma City and Norman – The American Legion’s National Emergency Fund (NEF) responded immediately, providing financial aid to the Howards and other qualified veterans and families.

“This time the Legion was there, asking, ‘What do you need? How can we help?’” Stella says, adding that Legionnaires also offered transportation to those displaced by the storm.
NEF payouts were delivered immediately so those affected could purchase food, clothing and gas. “When you don’t have anything and you’re like us – seniors on a fixed income – that extra amount of money that The American Legion made available to us is a blessing,” Jack says.

HISTORY OF HELPING
Throughout its history, the NEF has provided quick relief to Legionnaires following tornadoes, hurricanes, wildfires, earthquakes and other natural disasters.
The program began in 1969 as a one-time effort in the wake of Hurricane Camille, which devastated the Gulf Coast – primarily Mississippi, and parts of Louisiana and Alabama. The Legion’s National Executive Committee (NEC) approved a resolution in August that year establishing the fund in order to “meet the most urgent needs through American Legion channels.”

In addition to homes being damaged or destroyed by Camille, several Legion posts suffered similar fates. “Where the neat, red-brick Legion post home in Buras (La.) once stood, there remained a sort of saucer of wet sand and a few chairs to show for it,” according to the November 1969 American Legion Magazine.

The fund was resurrected in 1989 when Hurricane Hugo pummeled the Carolinas and Puerto Rico. The NEC once again pledged $25,000 and called for a fundraising drive. A resolution was approved stating that any leftover funds would be saved for future natural disasters.

Since that time, NEF donations have provided more than $8 million in emergency relief for Legion Family members, posts and others in need. The fund covers qualified Legionnaires recovering from major disasters – Hurricane Katrina, Superstorm Sandy and the like – as well as lesser-known cases such as river flooding in North Dakota or wildfires in Arizona.
American Legion National Commander Dan Dellinger is striving to educate Legion Family members on NEF and the importance of a strong emergency-assistance program. That’s why he made NEF his major fundraising project this year, with a goal of generating more than $1 million.

“As we’ve seen with these erratic weather patterns, I don’t think anyone is off the board at this point,” Dellinger says. “Look at Colorado for the floods. Of course, you have the Missouris and Mississippis that flood a lot. Look at Irene. Who would have thought that Vermont would get hit like that? Those are just a couple of the examples that show that a disaster can happen to anybody at any time. Look at the tornadoes that are popping up in the upper parts of the country. With the shifting weather patterns, I don’t think anyone is immune.”

‘FORTUNATE TO BE BACK’
In the case of Sandy, NEF grants helped Legion Family members to resume their lives and posts to rebuild their homes.

In Brick, N.J., Post 348 sits on a hill overlooking the Metedeconk River, at the point where it widens to a larger body of water for boaters and other outdoor water enthusiasts. Post Commander Skip Amundson, who has been a member there for more than 20 years, never thought he’d see the day when river water would pour into the building.

On Oct. 29, 2012, the ocean breached the bay, flooding the Metedeconk and raising the river level by upwards of three feet. The post’s canteen on the first floor was inundated with more than 20 inches, Amundson says. “I happened to be out of state at the time of the storm, down in Florida, and when I called down there, they said, ‘Skip, there’s fish swimming around in here.’ And they weren’t kidding.”

The massive storm wiped out the post’s first floor and flooded the tiki bar and picnic area.

“We were essentially knocked out of business,” Amundson says. “Once the canteen goes, we don’t have a way to make money anymore. That started a long process where we had to decide what we had to do. It wasn’t something that we could just put a Band-Aid on.”

The 1950s-era building was structurally strong, so the post rebuilt the first floor while using the second level to conduct business during the 13-month repair period.

Amundson estimates that the repairs totaled $230,000. Post 348 received a $4,000 NEF grant, which was matched by another Legion post and other nonprofit organizations. The NEF grant was the first glimmer of hope for Amundson since he learned of the devastation.

“One thing I noticed was that I wasn’t alone,” he says about a meeting New Jersey Adjutant John Baker conducted for NEF claimants. “There were a lot of guys in the same position, a lot of people in there representing their posts looking for help.”

Even today, Sandy’s devastation can be seen throughout Brick and other Jersey Shore communities. “A lot of people had to walk away from their houses,” Amundson says. “Even today, many houses are sitting just like they were a year ago.

I feel very fortunate. We’re among the few who got their post back. The grants like NEF and the fundraisers helped. We’re fortunate to be back.”

Dellinger toured disaster areas in Indiana after strong tornadoes struck in mid-November, and in New York long after Sandy left its mark.

“I saw some catastrophic results from Sandy,” he said shortly after the New York visit. “One man came up and said, ‘I benefited. My house is gone. But you were there to help me when I needed it.’ And he presented a $100 check to pay it forward. I think that’s what a lot of people will do.

“It’s only through the generosity of our members that the goal will happen.”

GIVING BACK
In Oklahoma, Joe DeLaCruz is continuing to pay it forward.

After retiring in 1976, the 21-year Army veteran was battling health problems. He credits a Legion service officer who helped him make a claim for problems linked to exposure to Agent Orange during the Vietnam War.

Motivated by the help he received, DeLaCruz joined the Legion and embraced its volunteer opportunities, becoming a service officer himself. “I came to do this because The American Legion helped me,” he says. “The way I feel is that every day is Veterans Day. And we need to help each other.”

Soon after he assisted the Howards and other victims of the Moore tornado, DeLaCruz became chairman of the Department of Oklahoma’s emergency relief program. Even though the work can be unsettling, he pushes forward to assist veterans and their families.

“When something like that happens, it makes me teary-eyed,” he says. “I would go back and drive through the area and see all the buildings smashed up, houses demolished. I would see toys and clothing all over the place. Cars all torn up, one on top of another. I would see people going through the trash, looking for photographs. It was tearjerking.”

A NEW START
Among those who DeLaCruz has assisted are Larry and Marilyn Whitmore, who lost everything in the Moore tornado.

Marilyn, who was at work at the time of the disaster, kept in contact with Larry at home up until the tornado struck about 3 p.m. Larry found shelter in a hallway and “took a pretty good beating.”

For Larry, who served in the military for more than 20 years and has worked as a first responder, it was time to take charge. “I dug out a next-door neighbor, then started directing people around and comforting neighbors. I was amazed (at what I saw). But I knew I had to go to work helping people. I didn’t have any problem with that.”

Usually her husband’s actions don’t surprise Marilyn. But this was different. “This all happened after he had a head wound and bruises all over,” she says. “I don’t know how he was walking, much less out helping people. They said he wouldn’t sit down.”

Finally a police officer stepped in and pulled Larry aside, telling him, “You’re through. Mission’s over.”

That’s when the helping stopped and the healing began. The Whitmores addressed their immediate needs, including patching up Larry and finding shelter and food.

Larry recalls that after two nights in a hotel, the staff wanted the Whitmores to move into another room. So they packed up all their belongings into two small boxes and relocated.

Then came the realization that they would need some help rebuilding their lives.

“I was OK with approaching veterans organizations, but we didn’t want to go to other civic organizations because there are people that need this a whole lot more than we do,” Marilyn explains. “The ones that we depended on were the ones that we connected with, like the military agencies. It was greatly appreciated.”

The Whitmores chose not to rebuild, instead moving about four miles away to another subdivision in Moore. “Our 7-year-old granddaughter, Abby, really brought everything into perspective,” Larry says about moving into their new home. “She said that we had memories of your old house that blew away, and we will just have to make memories in this new house. That is so profound for a 7-year-old kid.”

Still, they needed assistance after the tornado to pay for hotel bills, food, clothing and gas. “We can’t thank the Legion enough for helping us out,” Marilyn says.
The NEF funds provided “a comfort to us that was almost out of reach,” Larry says. “We had nothing. Getting that grant from The American Legion helped bring us back a couple of steps toward normalcy. And that helped us know that we were going to come back strong, and we’re getting closer and closer each day.”

Henry Howard is deputy director of The American Legion Magazine.