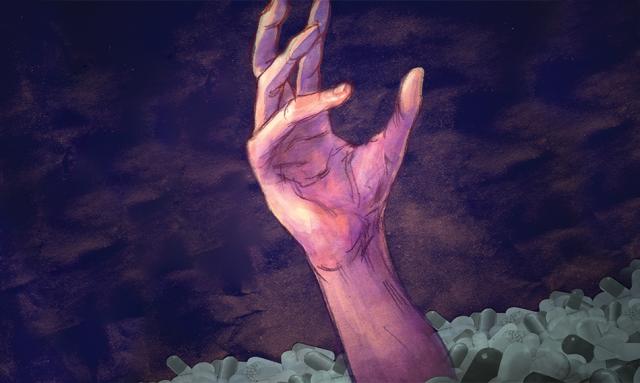 By the time Justin Minyard discovered the video of himself stoned, drooling and unable to help his daughter unwrap her Christmas presents, he was taking enough OxyContin, oxycodone and Valium every day to deaden the pain of several terminally ill cancer patients.

“Heroin addicts call it the nod,” the former Special Forces soldier says of his demeanor in that video. “My head went back. My eyes rolled back in my head.

I started drooling on myself. My daughter was asking why I wasn’t helping her, why I wasn’t listening to her.”

Seeing that video jolted Minyard out of a two-year opiate stupor. He asked a Fort Bragg pain specialist to help him get off the painkillers his primary care physician had prescribed. “I was extremely disappointed in myself,” he says. “I knew I couldn’t do that to my family again.”

There are thousands of post-9/11 veterans like Minyard – men and women whose bodies were broken by roadside bombs, bullets or jumping out of helicopters and Humvees day after day, deployment after deployment, wearing 80 pounds of body armor and battle gear. Some have traumatic brain injuries. Some have PTSD. Some have deteriorating knees, shoulders or spines. All have pain.

Overwhelmed primary care physicians have responded with ever-increasing doses of prescription opioids. There has been a 270-percent increase in VA prescriptions for four key opiates since 9/11, according to an analysis by the Center for Investigative Reporting. VA patients are twice as likely to die from accidental drug overdoses as civilians, according to a VA study published in the journal Medical Care in 2011. Yet opioid painkillers provide “only modest medical benefits in treating chronic non-cancer pain,” a separate VA study found.

In Minyard’s case, as in so many others, “the treatment regimen was as bad as the disease,” says Dr. Tony Dragovich, an Army pain specialist now in private practice in Virginia who helped get Minyard off opioids.

MULTIPLE INJURIES A series of debilitating injuries led to Minyard’s massive painkiller habit. The first occurred when he and other members of the 3rd Infantry Regiment spent six weeks moving piles of rubble at the Pentagon following the 9/11 attacks. He then volunteered for language school, and by the time he deployed to Afghanistan in 2004 as an interrogator he was already taking aspirin, ibuprofen, Vicodin and muscle relaxants, and was being administered epidurals for his back pain. “I was only 25,” he says. “And if you looked at an MRI, I had the spine of a 60-year-old.”

The injuries mounted. Minyard fell two stories during a combat operation in Afghanistan, on top of the wear and tear that comes from riding in a helicopter – the vibration in a Black Hawk is particularly hard on the spine, Dragovich says  – and running around in full combat gear. He had surgery to replace two discs after he returned from that deployment. By then he was alternating between Percocet and Vicodin and should have stayed home. But because the Army was short of soldiers fluent in Arabic, he volunteered to go to Iraq in 2007.

“Looking back, that was probably one of the worst decisions I made,” Minyard says. “It had a lot of ripple effects beyond my health. I left when my daughter was three weeks old.”

His pre-deployment physical was a quick conversation with a physician sitting behind a desk, who asked if he “needed any meds.” Minyard doesn’t blame the doctor. “Probably half of the people coming to his office every day are trying to get out of deployment,” he says. “And he has to deal with 500 guys who are in line behind me.

He probably doesn’t care about Justin and his back problems.”

The op tempo in Iraq was as furious as the strain on Minyard’s body. Before his unit rolled out on missions, he gave himself injections of a super-strength anti-inflammatory called Toradol. Between them, he visited the medical tent for epidurals and additional pain medications. “That was a double-edged sword,” he says. It eased his pain while enabling him to continue harming his back.

Minyard’s pain was severe enough, however, that he went to the doctor while home on R&R. Fort Bragg physicians told him the damage to his spine was so significant that he shouldn’t return to Iraq. For him, that would have meant abandoning his platoon. “I chose my military family over my real family,” he says. “I chose the military over my personal health.”

The accumulated damage caught up to him. Minyard collapsed as he climbed out of a Humvee in August 2008. He was airlifted to Balad, where he sustained a concussion and additional back injuries after a nurse dumped him on the floor during a mortar attack, he says. Once home, surgeons at Duke University installed eight titanium rods to hold his spine in place – a procedure called an “anterior-posterior interbody fusion.”

Before doctors could operate, however, Duke had to bring in an outside team to figure out how to treat Minyard’s post-surgical pain given his high tolerance to opioids. They settled on ketamine in combination with other drugs that allowed Minyard to disengage from reality, he says. It worked. But by that time he was confined to a wheelchair and weighed 280 pounds.

For the next two years, Minyard struggled with PTSD, depression, severe cognitive challenges, the loss of his military career and anger over his injuries. He took ever larger doses of “big league opioids,” as he puts it. “No one said, ‘This is a problem.’ This was offered to me.”

Somewhere in that haze, he says he came close to killing himself.

“To go from a very successful career as a soldier to hiding out in our guest bedroom with the shades closed for weeks at a time, taking pain pills and being ashamed ... I considered taking the whole 30-day supply in one shot,” he says. “It would have been incredibly selfish on my part.” Though not unusual. Seven of his friends died in combat. Fifteen have killed themselves since coming back.

Minyard attempted to kick opioids three different times. “It was the most unpleasant, horrible, excruciating time of my life,” he says. In the middle of moving to a different home, he came across an unlabeled video, popped it in the VCR, and watched in horror as his near-comatose self couldn’t even help his daughter unwrap her Christmas presents. He asked his primary care physician at Fort Bragg to refer him to a pain specialist.

ACCIDENTAL DEATH An untold number of other veterans don’t get the sort of help that saved Minyard. A 43-year-old retired Army veteran died four days after back surgery in the fall of 2011. The Arkansas State Crime Lab ruled the cause of death as “mixed drug intoxication” complicated by back surgery. His widow, Kimberly Stowe Green, told the House Veterans’ Affairs Committee, “My husband – Ricky Green – died as a result of VA’s skyrocketing use of prescription painkillers.” Ricky’s medication list included oxycodone, hydrocodone, Valium, Ambien, Zoloft, Gabapentin and Tramadol. This despite her husband’s repeated requests that VA doctors treat the root cause of his medical problems – knee, back and ankle injuries acquired over his 23-year career as a paratrooper and military policeman – and reduce his prescription opiate painkillers, she said.

VA declined to answer questions regarding Green’s case, noting that it does not comment on specific patients. Overall, the agency says it has “worked aggressively to promote the safe and effective use of opioid therapy.” VA clinicians discuss benefits and side effects of medications with patients. Opting for opioids is “a collective decision between the veteran and their health-care team,” VA says. In addition, VA connects patients and families to “pain schools,” support groups and other resources.

VA has also adopted regulations aimed at reducing the risks of prescription painkiller use – a strategy it emphasized during that same congressional hearing. But VA hospitals and clinics are not adopting those changes, Green says. “They were repeatedly violated in my husband’s case – and he had to pay with his life.”

Meanwhile, Iraq and Afghanistan veterans who are at the greatest risk of addiction and accidental overdoses are the most likely to receive opioid painkillers from VA, according to a VA study published in 2012. This was particularly true if the veteran also had PTSD.

“People at the greatest risk of addiction and overdose are the people who are going to have the most distress from their pain,” Dragovich says. “If a patient comes to you with a lot of psychological distress and a lot of pain-related distress, most physicians are going to give them opioids.”

STANDARD PROCEDURE High doses of opioids became standard protocol for pain treatment in the late 1990s and early 2000s, Dragovich says. When that protocol is applied to a military base with 1 million primary care visits a year, the result is a lot of opioid prescriptions. Because young soldiers build tolerance to opioids quickly, he adds, doctors escalate the doses quickly.

Severely injured servicemembers also often come out of the hospital receiving high doses of opioids for traumatic battle injuries such as the loss of an arm or leg. Then they are faced with the excruciating work of getting off opioids for good. That’s not an easy sell no matter the patient.

It took Minyard six months from his first meeting with Dragovich to agree to try the doctor’s plan for helping him kick opioids. Dragovich used a drug called Suboxone to ease Minyard’s transition off the painkillers. He also arranged for him to get a spinal-cord stimulator that uses electrical impulses to short-circuit pain messages before they reach the brain. He calls it a pacemaker for pain.

“I felt like this was going to be the one thing that helps turn me around.” It did. Today he’s out of his wheelchair, has lost 100 pounds and regularly bicycles.

The Army supports the use of spinal-cord stimulation, but there are few specialists to guide soldiers to such alternatives. Fort Bragg had two board-certified, fellowship-trained pain specialists while Dragovich was stationed there. As a result, it may take three or four years of other treatments before injured troops see someone with Dragovich’s expertise.

It’s also difficult to get a referral to a pain specialist in VA, says Minyard. And it’s quite difficult to receive spinal-cord stimulation at VA. “You have to fail at all other treatment plans,” he says. “Is failure an overdose? Or is failure when you are a full-blown addict?”

VA says it has expanded its alternative medicine offerings, and provided spinal cord stimulation to 36 patients from fiscal 2011 to fiscal 2013. Beyond that, its treatment includes “timely access to secondary consultations from pain medicine, behavioral health, physical medicine and rehabilitation,” VA says.

Minyard, who is 90-percent service-connected for his injuries through VA, has charted his own recovery. He took his last opioid painkiller in October 2011. At his Army retirement ceremony in March 2012, he thanked Dragovich for saving his life. He feels so passionately about staying off opioids that he has a medical directive prohibiting the use of narcotics without his consent. And if he’s unable to provide that consent, his wife has to agree to it. He tested that directive when he was struck by a truck while bicycling at Fort Bragg – an unsolved hit-and-run. But he has no second thoughts about opioids.

“I consider myself extremely lucky,” he says. “I was able to push through the maze of providers ... and find the doctor who knew the secret. Many soldiers aren’t so lucky, and are left to the crushing reality of lifelong opioid dependency. Or worse.”

Ken Olsen is a frequent contributor to The ​American Legion Magazine.