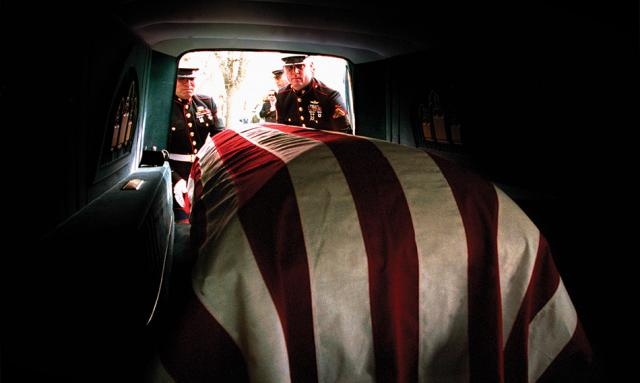 Kristie Roberts’ family was disheartened to learn that she didn’t qualify for burial in the national veterans cemetery near their home in upstate New York. It was Roberts’ wish when she first enlisted in the National Guard in 2002, and her last request when she died in
August 2012.

“She left a note when she committed suicide that said her wish was to be cremated and buried in the cemetery where her grandfather was buried,” says Roberts’ mother, Cindy. But interment at Gerald B.H. Solomon Saratoga National Cemetery or any other VA burial ground wasn’t possible, her family learned, because Roberts’ deployment orders said she’d been on training missions instead of active duty.

That was unacceptable. “Both my husband and I felt like there wasn’t anything else we could do for her,” Cindy says. “We had to fight until there were no options left.”

Tens of thousands of other veterans’ families share the Roberts’ determination to bury their loved ones in these revered national burial grounds. “A national cemetery is maintained at a very high level,” says Ami Neiberger-Miller of Tragedy Assistance Program for Survivors (TAPS). “It honors service and sacrifice in a way that is very beautiful for families.”

This sentiment, an aging veterans population and increasing awareness of burial benefits have VA scrambling to add cemetery space at the fastest pace since the Civil War. Demand has tripled in the past 20 years and isn’t expected to peak until 2017. VA also wants to increase the number of veterans who choose national cemeteries.

Nearly 4 million veterans from every conflict since the Revolutionary War are interred in 131 national veterans cemeteries run by VA in the United States and Puerto Rico (the Army administers Arlington National Cemetery). The agency has opened 19 new cemeteries since 1997 and is in the process of adding five more. It also offers a few burial sites in national cemeteries that are officially full when remains are removed and reinterred elsewhere. (That’s the case at the National Memorial Cemetery of the Pacific in Honolulu, for example, where the remains of previously unknown Korean War veterans have recently been identified and moved.)

VA is expanding existing national cemeteries, funding veterans burial sections in community cemeteries, and providing grants to states and tribes to build their own veterans cemeteries.Overall, some 90 percent of veterans should have “reasonable access to a burial option within a 75-mile radius of their home” as of this fiscal year, the agency says.
That still leaves millions of veterans and families without convenient access to national cemeteries. Eleven states with a total of 1.8 million veterans don’t have one. Six of those states – Nevada, Idaho, Utah, Montana, Wyoming and North Dakota – are hundreds of miles from the nearest national cemetery. “Think of the families who don’t get to go see their loved ones,” says Rep. Dina Titus, D-Nev.

Titus, who is the ranking member of the House Disability Assistance and Memorial Affairs Subcommittee, is on a mission to change that. “A national cemetery has a higher standard and better management and oversight,” she says. “You shouldn’t be denied that privilege just because you happen to live west of the Mississippi.”

VA has plans for an additional 18 national burial facilities over the next 10 years, she adds. Surely one or two of the national cemeteries could be in one of these six Western states.

‘WE FOUGHT FOR THIS NATION’ Under VA’s strict population criteria, at least 80,000 veterans must live within a 75-mile radius of a potential national cemetery site. By Titus’ calculations, 170,000 veterans alone live in the Las Vegas area, which is part of her southern Nevada district. But VA says that not enough live within the required radius to justify a site.

So instead of constructing a national cemetery in Nevada, VA is buying a section of burial plots for veterans in a local cemetery in Elko, Nev., 430 miles to the north. The agency also notes that all the states without national cemeteries, including Nevada, have at least one state veterans cemetery.

But a state cemetery doesn’t address the needs of many veterans and families, says Janet Snyder of Las Vegas, legislative chair of the National Society of Military Widows, and a member of American Legion Auxiliary Unit 149 and other veterans organizations.

“A state cemetery is kind of second-class,” says Snyder, who placed a memorial marker for her late husband, Tom, at the Southern Nevada Veterans Memorial Cemetery in Boulder City because she felt like she didn’t have any other option. “I would have preferred a national cemetery. It seems much more prestigious and more of an honor for our military heroes.”

Although it’s a nice facility, there have been problems at the state cemetery over the years, Titus adds. “There was an example where they didn’t follow the rules, and the crews were taking the old gravestones and building patios out of them,” she says. “And one veteran who was interviewed for a little TV spot on this topic said, ‘We fought for this nation, not this state. We deserve to be in a national veterans cemetery.’ I think that says it all.”

It’s also a major undertaking for Snyder and other widows to visit Boulder City, though it’s only an hour away. Like Snyder, many of them don’t drive.

“We’ve got World War II widows whose husbands are buried at Boulder City,” says Snyder, 73, whose husband served in Vietnam during his 20-year Army career. “Last time one of them got carsick. She said, ‘I’m not sure I can do this again.’”

“If it was here in the Las Vegas area,” she adds, “I could ride my bicycle or take a bus.”

The hassles extend beyond getting to the cemetery for birthdays, the anniversary of a loved one’s death and Memorial Day. When friends and family visit Snyder, they also want to go out and place flowers or a flag at her husband’s marker. “It takes a lot out of the precious time they are here,” she says.

‘I WOULD MOVE MY LOVED ONE HOME’ Some states have given up on landing new national cemeteries and plan to tap VA’s grant program to build their own facilities. Last summer, New Mexico Gov. Susana Martinez announced plans to establish up to four veterans cemeteries to serve her state’s rural reaches, hundreds of miles from the national cemeteries in Santa Fe and Fort Bayard, N.M., or Fort Bliss, Texas.

The governor has asked communities to apply to host one of the new cemeteries. Under her plan, the state will recoup a large portion of the costs from VA.

Carlsbad has decided to build a veterans cemetery to national standards even if it’s not selected. The southeastern New Mexico community has been trying to get a veterans cemetery for 20 years, says Adon Rodriguez, who is spearheading the Carlsbad Veterans Cemetery project. Since the latest effort was announced three years ago, “I’ve had 10 families call me and say, ‘If we had a veterans cemetery, I would move my loved one home’” from the national cemetery in Santa Fe, he says. These aging families can no longer travel to see their loved ones’ graves.

The city has donated 4½ undeveloped acres in an existing cemetery called Sunset Gardens, and there’s the promise of additional land in the future if needed. “We have a beautiful location a quarter mile from the Pecos River, real quiet, farm fields all around it,” Rodriguez says.

The Carlsbad Veterans Cemetery project is attracting cash donations from citizens and companies, as well as pledges of free labor and material from local contractors. The Eddy County Commission has offered to pave the parking lot and driveways. A consultant is helping ensure that the cemetery is constructed to VA’s national standards. With any luck, Rodriguez says, VA will one day adopt the Carlsbad cemetery.

“We’re shooting real hard, hoping we’ll be a national cemetery,” says Rodriguez, who served six years in the National Guard in the 1950s. “If we finish this cemetery, maybe I can qualify to be buried with my fellow veterans.”

For the Roberts family, Kristie’s burial in the Saratoga national cemetery was about more than laying her to rest with her fellow veterans and honoring her service as a paramedic. She took her re-enlistment oath at her grandfather’s grave in 2010, noting how proud he was to see her in uniform just before he died on Christmas eight years earlier.

“She first enlisted at 17. She had always been patriotic, a volunteer from the get-go,” Cindy Roberts says. Both Kristie and her grandfather, Robert, an Army veteran, were members of American Legion Post 374 in Lake George, N.Y. “She was a granddaughter to make her grandpa proud.”

Kristie’s parents started contacting public officials for help soon after she died. “I felt like it was one brick wall after another,” Cindy says. They eventually connected with TAPS, which helped them apply for a burial waiver, which can only be granted by the VA secretary. U.S. Rep. Bill Owens, D-N.Y., also worked on their behalf. Thirteen months later, they received permission to place Kristie’s ashes next to her grandfather, a kindness made possible in part because her grandmother relinquished her burial plot.

“I was pleased,” Cindy says. “She would have gone anywhere in the world they sent her without question. We should not have had to fight that hard to finally get permission for Kristie to be laid to rest in the national cemetery. No veteran’s family should.”