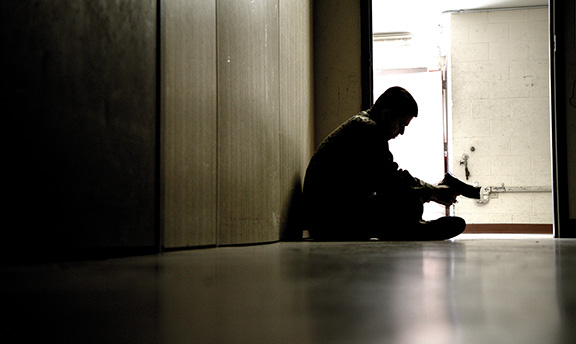 Caitlin Thompson’s path to becoming VA’s deputy director of suicide prevention in 2013 can be traced back to her pre-doctoral internship at the Denver VA Medical Center.
“The fact that I knew three young veterans who died of suicide really hit me hard,” recalls Thompson, who later did a fellowship at New York’s University of Rochester as VA’s crisis line was developed. She also worked as a psychologist providing clinical training and supervision, and helped establish VA’s online chat service.
The chat service, along with the toll-free hotline and texting option, immediately connects veterans with help when experiencing thoughts of suicide or other crises. More than 24,000 people have used the texting service since 2011. VA responders have engaged in more than 175,000 online chats and logged over 1.25 million calls on the crisis line.
Thompson spoke to The American Legion for September’s National Suicide Prevention Month.

How has the texting option helped limit the number of veteran suicides?
The increase has been dramatic for the numbers of veterans chatting online or via text. The calls continue to increase, too, as people become more aware of the crisis line. We’re more focused on making it easy for veterans to reach out in the way that is most comfortable for them. Veterans, especially younger veterans and servicemembers, prefer texting or chatting online. There is more of a comfort there to do that.

Can you give us a specific success story?
A veteran was traveling by Greyhound to the Golden Gate Bridge to jump off. He started texting one of our responders while on the bus. Over the course of four hours, just texting back and forth, the veteran agreed to go to VA. They were able to send an ambulance to the bus as soon as it stopped for care the veteran needed immediately. Amazing stories like that happen every day.

You recently participated in the Legion’s TBI/PTSD symposium, where an online survey found that 59 percent of veterans reported feeling either no improvement or worse after undergoing TBI and PTSD treatment. How does that correlate to the suicide rate?
The survey was clearly so important for us to better understand how veterans are engaging in their care and how they are finding they get better over time. One of my colleagues said keeping veterans in PTSD care can be very difficult because so much of the treatment may involve longer-term treatments and things like exposure therapy, where veterans are asked to continue to relive the trauma to desensitize themselves to it. There has been some preliminary work done showing that some veterans with TBI or PTSD may be at greater risk for suicide. So we are very focused on those conditions as well as others.

Henry Howard is deputy director of magazine operations for The American Legion.