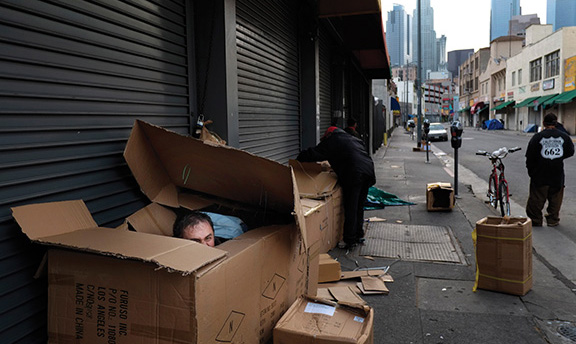 Of all of the egregious cases involving homeless veterans in Los Angeles, one stands out for attorney Mark Rosenbaum. VA police arrested a homeless Vietnam War veteran they caught taking food from a trash bin on the West Los Angeles VA campus. Although clearly mentally disabled – the veteran had suffered a head injury after falling out of a helicopter – VA cops didn’t extend a helping hand. Instead, they gave him a citation for stealing government property. He paid the $1,000 fine by collecting aluminum cans.

At a time when veterans are dying in the nation’s streets in greater numbers than they died at war in Iraq or Afghanistan, VA is not only turning its back on mentally disabled veterans in Los Angeles but actively punishing them, homeless advocates say. It’s especially appalling considering that the West Los Angeles VA campus was built on land given to the federal government for the express purpose of housing disabled veterans.

Not only did VA stop allowing veterans to live there, it turned more than 100 acres of the property into a leasing enterprise for everything from a dog park to charter bus storage, a private school’s athletic center and a hotel chain’s laundry – not to mention the UCLA baseball stadium. And VA is fighting a federal judge’s order prohibiting such deals.
“They have treated these veterans as a nuisance to be ignored,” says Rosenbaum, who is part of a coalition suing to force VA to honor its legal obligation to house veterans at the West Los Angeles VA. “You are better off being a piece of (Marriott’s) laundry.”

VA’s antipathy toward chronically homeless veterans in West Los Angeles is especially striking given the Obama administration’s vow to end homelessness among former servicemembers by 2015. That seems impossible as long as VA denies permanent supportive housing for mentally disabled veterans in the homeless-veteran capital of the United States.

“This really isn’t a Los Angeles story, it’s a national story,” says UCLA law professor emeritus Gary Blasi, who has worked on homeless issues for 40 years. “One in every eight homeless veterans in the country lives in Los Angeles County. And Los Angeles is farthest behind any VA jurisdiction in doing what needs to be done.”

Healing acres The problem comes down to real estate. The West Los Angeles VA is adjacent to the exclusive Brentwood and Westwood communities. “Serving the needs of veterans became subservient to the interest of homeowners and real-estate people on this side of town,” Blasi says.

No one imagined this conflict when a U.S. senator and a Los Angeles businessman donated 387 acres to the federal government in 1888 with the stipulation that the land be used to “permanently maintain a national home for disabled volunteer soldiers.” The Pacific Branch of the National Veterans Home opened later that year with about 1,000 veterans in temporary quarters. The federal government added a hospital and permanent housing. A post office, churches, theaters and a 10,000-volume library followed. Veterans tended gardens, put on plays and rode the trolley to Santa Monica beaches. By 1922, West Los Angeles was home to about 4,000 veterans. “People had lives,” Rosenbaum says, “and they healed.”

“There was hostility misdirected to Vietnam veterans coming back,” Blasi says. “It certainly made it easier for people developing property around the West Los Angeles campus to apply pressure to decrease the number of veterans living there.”

VA has since leased ground to private companies. Details are sketchy, and VA has never fully disclosed the terms of the leases or how it spends the proceeds. “There has been no public accounting of any of that revenue,” says Melissa Tyner, who runs a legal clinic for homeless female veterans for the Inner City Law Center. And VA has stymied efforts to get those details, even in court.

VA referred all questions for this story to the Justice Department, citing ongoing litigation. That department also declined to comment.

Skid Row Without access to housing at the West Los Angeles VA, mentally disabled veterans have been effectively pushed to the streets. Thousands subsist on Skid Row, 50 square blocks of downtown Los Angeles where the city has tried to contain its homeless population for 40 years. It is the greatest concentration of poverty west of the Mississippi, says Adam Murray, executive director of the Inner City Law Center.

About 1,000 people sleep under a crazy quilt of tarps, blankets, cardboard and tents on Skid Row sidewalks. Some 4,000 live in shelters or other short-term housing, and another 6,000 live in single-room occupancy hotels that date back to the arrival of the Union Pacific Railroad more than a century ago, Murray says.
The police presence is intense, and citations for minor infractions are common, Tyner adds.

“The class of individuals we represent are mentally impaired homeless veterans with serious needs whose very life is being threatened by this lack of service,” says Ron Olson, a prominent Los Angeles attorney who became involved with the case in part because of his admiration for his uncle, who fought from Iwo Jima to the Philippines then struggled to reintegrate when he returned from World War II. “Too many are self-medicating themselves to more serious illness and even death.”

And their numbers will increase given the injuries prevalent among Iraq and Afghanistan veterans. “The number of people coming back and becoming chronically homeless increased 640 percent from 2006 to 2012,” Blasi says. “There’s no reason to think it won’t continue to rise quite dramatically, and at a higher rate than expected, because of the rate of traumatic brain injuries and PTSD that VA and the military are finding among these vets.”

Send in the vouchers VA has increased the number of Housing and Urban Development-Veterans Affairs Supportive Housing (HUD-VASH) vouchers that veterans can use to rent apartments. That helps former servicemembers who are capable of finding their own housing and don’t have pressing health-care needs. But because of their injuries, it’s extremely difficult for mentally disabled veterans to negotiate the bureaucratic hurdles to get connected to VA benefits, much less apply for a HUD-VASH voucher or find permanent housing.

“Imagine living on the street, trying on a daily basis to have your basic needs met, dealing with mental health issues and trying to get services from very entrenched and backward bureaucracies,” Tyner says. “It’s impossible.”

HUD-VASH vouchers also isolate homeless Los Angeles veterans from the VA services they desperately need, she continues. That’s because the vouchers don’t cover the high price of an apartment near the West Los Angeles VA, where there’s a huge hospital, a polytrauma center, a domiciliary, mental health counseling, dental care and other services that were easily accessible when veterans were allowed to live on the campus. Instead, voucher-dependent veterans have to live miles from the campus and deal with the city’s complex bus system if they want to get to the West Los Angeles VA. Based on her experience working with veterans with significant mental disabilities, having to take even one bus greatly diminishes the chances a mentally disabled individual will connect to care, Tyner says.

“You might as well give them a ticket to the moon,” Rosenbaum adds.

VA does lease a few buildings on the West Los Angeles campus to nonprofit groups that provide transitional housing. The capacity is limited and veterans have to be clean and sober to qualify – which excludes the veterans most in need of help.

Proven solution The most effective solution is to “put them in permanent supportive housing without conditions and then support their recovery,” Blasi says. People who work for VA have done much of the research that validates this approach, known as Housing First. “It has been ignored by the people in Los Angeles,” he adds.

A significant number of Los Angeles social service agencies and supportive-housing developers have embraced Housing First as a result of collaboration between United Way of Greater Los Angeles and the Los Angeles Chamber of Commerce. It’s far less expensive than leaving people to fend for themselves on the street, says Mike Alvidrez, executive director of the Skid Row Housing Trust. A 2009 Los Angeles Economic Roundtable study called “Where We Sleep” compared the cost of homelessness, from emergency-room visits to law enforcement interactions, with the price of providing housing and support services. The average homeless person costs the county nearly $3,000 a month and the sickest upwards of $100,000 a year, Alvidrez says. By contrast, it costs about $600 a month to provide these individuals supportive housing.

“It’s absurd, when we’re paying hundreds of thousands (of dollars) a year to keep people on the streets,” Alvidrez says. “It’s the worst outcome with the highest price tag.”
In short, “without housing, we’re not going to have an impact,” Tyner says.

That is one of the reasons Bobby Shriver and other homeless advocates began pushing VA to again provide permanent housing for disabled veterans at VA’s largest campus. There’s plenty of space in its more than 100 empty buildings. “Ten years have gone by, two wars have been fought, and VA has not moved on that,” says Shriver, a former Santa Monica mayor and city councilman who is now running for the Los Angeles County Commission seat with zoning jurisdiction over West Los Angeles.

A coalition including the ACLU, Blasi, the law firms of Arnold & Porter and Munger, Tolles & Olson, the Inner City Law Center and Harvard law professor Laurence Tribe filed their lawsuit on behalf of thousands of homeless veterans in June 2011. Last fall, a federal judge in California ruled that VA’s leases with the private schools and private businesses were illegal. Enterprise Rent-a-Car and Marriott have moved out. But the judge also rejected the plaintiff’s argument that VA is required to provide housing to mentally disabled veterans. Both sides appealed.

The coalition representing homeless veterans contends that VA is compelled to provide permanent supportive housing under the terms of the original deed as well as laws mandating services for disabled individuals. VA contends that it has the prerogative to lease parts of the West Los Angeles campus, given that it owns the property. UCLA joined VA in its appeal, arguing that the judge’s decision to void the leases leaves the university’s baseball program “homeless.”

Meanwhile, Sens. Dianne Feinstein and Rep. Henry Waxman persuaded Congress to pass legislation prohibiting sale or commercialization of the West Los Angeles VA property – a measure VA seems to ignore. They also pushed through legislation authorizing the renovation of two buildings for therapeutic housing. Only one of the renovations is funded.

There are other catches. “It is so far removed from the concept of permanent supportive housing that it won’t work with our clients,” Blasi says. “It’s restricted to therapeutic housing, which is by definition temporary. And it comes with the assumption that you have to be clean and sober ... If it’s not amended, it will fail.”

The solution is obvious to those who demand change. Rather than serving up halfhearted measures or tying up the case in court, VA should provide veterans the care they earned. The buildings are already in place at the West Los Angeles VA. Making them available for permanent supportive housing is a simple executive decision.