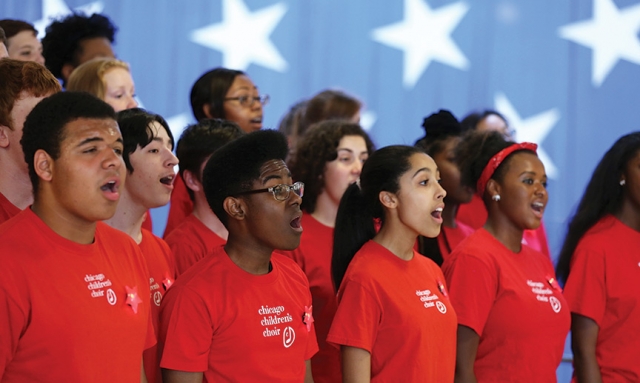 One of the curious facts about “The Star-Spangled Banner” is that 117 years passed between the moment Francis Scott Key put pen to paper in 1814 and Congress’ designation of the song as our official national anthem in 1931. Despite several rivals for patriotic affection that emerged throughout that time, organizations such as The American Legion lobbied on the song’s behalf in the 1920s and fought against its desecration after the law took effect.

Born in battle, “The Star-Spangled Banner” is distinct for having been written behind enemy lines. While negotiating the release of a prisoner from the British during the War of 1812, Key became privy to England’s plans to rout Baltimore. Enemy commanders held him and two compatriots aboard a ship until the battle’s end, when, inspired by the massive banner’s hoisting over Fort McHenry, he wrote his famous words.

Through the years, many opponents of the song have decried its alleged militarism, but Key merely described what he saw that night. In fact, Key, a pacifist, served as a reluctant fighter when the British marched on Washington three weeks before the Battle of Baltimore.

His song also qualifies the country’s use of force. Many Americans are unaware that Key completed four verses, which he matched with a pre-existing melody. In the final verse, he wrote, “then conquer we must, when our cause it is just, and this be our motto ‘In God is Our Trust!’” The federal government has printed the parsed phrase “In God We Trust” on coins since the Civil War and on paper money since the 1950s, when Congress adopted the slogan as the nation’s official motto.

“The Star-Spangled Banner,” which became instantly popular, outlasted a handful of other anthem contenders throughout the 1800s. In 1893, the Navy ordered that it be played for colors, and the Army followed suit two years later. President Woodrow Wilson issued an executive order in 1916 declaring Keys’ song to be the national anthem, though he considered his edict applicable only to the armed forces.

Soon after The American Legion’s founding in 1919, the organization attempted to instill proper etiquette toward the Stars and Stripes and also promoted “The Star-Spangled Banner” as the national anthem. By helping pass the Flag Code of 1923 along with dozens of other patriotic groups, the Legion sought to institute the ritual of standing and removing headgear when the song aired, a practice adopted informally and inconsistently in the 1800s. Under the leadership of Garland Powell, head of the National Americanism Commission, the Legion promoted Patriotism Day in the nation’s schools throughout the 1920s to foster respect for the flag and its primary ode.

The Legion worked closely with Veterans of Foreign Wars and other patriotic groups to lobby Congress on behalf of “The Star-Spangled Banner,” prevailing on allies to introduce anthem legislation. Politicians remained reluctant to act on a nonpressing issue, but it should come as little surprise that two scandals embroiling veterans helped force the hand of Congress and President Herbert Hoover, who ultimately signed the bill. The law cost almost nothing to implement and mollified veterans incensed over the bonus issue and shoddy treatment of veterans by federal agencies.

Official designation for the song did little to end controversies, especially after singer Kate Smith brought “God Bless America” to prominence in 1938. Lucy Monroe, known as the Star-Spangled Soprano, served as a counterweight to Smith and first rose to prominence as the nation’s most famous anthem singer after she debuted at the Legion’s 1937 national convention in New York. Monroe regularly performed for the nation’s troops and at Yankee Stadium, singing the song thousands of times.

In the late 1930s, some Americans displayed indifference toward “The Star-Spangled Banner,” and in 1939 Legionnaires picketed a movie theater in Santa Barbara, Calif., objecting to what they considered “an informal rendering of the anthem in ‘canned’ form” along with a lack of respect shown by audience members. One sign read, “This theater is commercializing patriotism by deliberately misusing the National Anthem.”

During World War II, the Legion sponsored a revamped Flag Code, passed by Congress on July 4, 1942, which called for Americans to stand for the anthem and hold their right hands over their hearts. During a Legion rally at Soldier Field in Chicago, 75,000 people sang the song as one.

The Legion took the lead in commemorating Memorial Day and Veterans Day and hosted numerous ceremonies welcoming new immigrants to the country, all of which featured flag-raisings and performances of the anthem.

In 1951, for example, National Commander Erle Cocke Jr. presided over “I Am An American Day” at the Hollywood Bowl. The Los Angeles Police Band played the anthem prior to the flag being raised, and movie stars Roy Rogers, Lana Turner and George Burns entertained a crowd that included 2,500 new U.S. citizens. That same year, American Legion Post 1789 in New York conducted a similar Americanization ceremony, and in Chicago the American Legion Auxiliary organized an A.B.C. (Americans By Choice) rally, passing out cards with the Pledge of Allegiance on one side and the anthem’s lyrics on the other.

When Congress conducted hearings in 1958 to consider a bill to institute an official version of “The Star-Spangled Banner” – there is no authorized rendition – the Legion supported the initiative, although many hereditary groups, including the Daughters of the American Revolution, opposed the measure, contending incorrectly that the bill’s sponsor, Joel T. Broyhill, R-Va., sought to change the song. The committee never acted and the matter died.

In the 1960s, performers began to do individualistic versions of the song – José Feliciano at the 1968 World Series, for example, and Jimi Hendrix at Woodstock in 1969. The Legion vigorously opposed unorthodox renditions and has passed several resolutions to this effect, including one in 1994 supporting “traditional” arrangements of the song and another in 2006 opposing changes to it.

The American Legion continues to promote respect for “The Star-Spangled Banner” and the flag it represents. In 2012, the Legion passed a resolution supporting the establishment of Star-Spangled Banner Day on March 3, the anniversary of the day Hoover signed the anthem bill into law. The measure would help spread knowledge of the anthem, which is “still there” 200 years after its creation and will be for a long time.