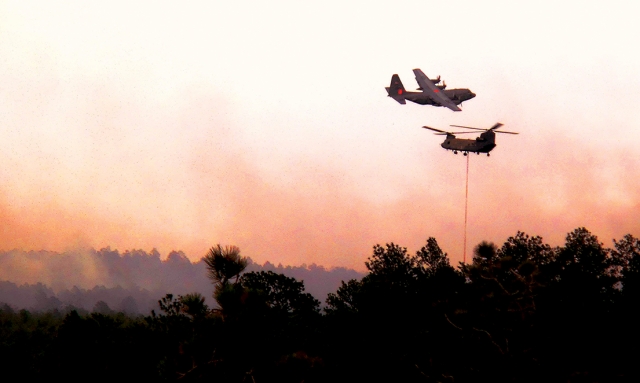 The row of burning houses looked like a war zone, Lt. Col. Luke Thompson thought as he flew his C-130 low over the Possum Kingdom blaze and dropped thousands of gallons of retardant in the path of the flames. He’d never seen anything like it in 15 years of fighting wildfires.
“We were all stunned from seeing the devastation,” says Thompson, chief of aerial firefighting for the 302nd Airlift Wing and a veteran of five deployments to Iraq and Afghanistan. But that 2011 Texas blaze was merely a taste of fires to come. The next two summers, Air National Guard and Air Force Reserve C-130 tankers battled to save homes near Colorado Springs from equally destructive wildfires. “It’s gut-wrenching to see any home burning,” says Thompson, who is stationed at Peterson Air Force Base, “but even more so in your own neighborhoods.”

Although it’s unusual for servicemembers to be on fire lines so close to home, the military is perhaps the longest serving wildfire force in the American West. In the late 1800s, the Army was often the only federal wildfire crew. Today, the military is a key surge force when the U.S. Forest Service, Bureau of Land Management, National Park Service and other federal wildland fire managers are stretched too thin.

“They are vital to our efforts,” says John Segar of the National Interagency Fire Center in Boise, Idaho, which coordinates the nation’s wildfire response. Without the military’s assistance, including the air tankers the Guard and reserve fly, more acreage and homes would go up in smoke.
Their role is expected to become even more critical as the U.S. Forest Service projects a 50 to 100 percent increase in wildfires by the middle of the century because of climate change. For seasoned Guard and reserve pilots providing critical aerial assistance, wildfires are the most difficult challenges they face at the controls of airplanes.

“It’s probably the most intense flying I’ve done in my life,” says Col. Jerry Champlin of the Wyoming Air National Guard’s 153rd Airlift Wing, who has also deployed to Iraq and Afghanistan. “Especially when you are dropping at 150 feet in the mountains with a fire sitting alongside of you ... trying to put the retardant exactly where the guys on the ground need it, trying to avoid the other aircraft.”
And there’s no computer assistance, Thompson says. “It may be one of the few things left in aviation where it’s all just eyeballs and stick and rudder.”

Yellowstone legacy The U.S. military has a storied firefighting tradition. The 1st U.S. Cavalry became the nation’s first paid wildland firefighters soon after arriving in Yellowstone National Park in August 1886. Soon the military was trying to prevent wildfires by ordering visitors to stay in designated campgrounds and expelling those who didn’t douse their campfires. By 1890, troops were also patrolling and fighting fires in the newly established Yosemite, Sequoia and General Grant national parks.

Four thousand soldiers were summoned to fight the Great Northern Rockies fires of 1910 and restore order across Idaho and Montana, says Lincoln Bramwell, chief historian of the U.S. Forest Service. Just five years old at the time, the agency had fewer than 1,000 employees – far too few to deal with some 1,700 fires that charred more than 3 million acres.

By World War I, Army biplanes were being used for fire reconnaissance. The military liaison to the fledgling U.S. Forest Service was Henry H. “Hap” Arnold, who commanded the Army Air Forces during World War II. The agency teamed up with the Air Force in the late 1940s to experiment with the use of surplus planes to drop retardant on wildfires. And in 1971, the first airplane outfitted with a Modular Airborne Fire Fighting System (MAFFS) – pressurized retardant tanks that can convert a cargo plane into an air tanker – made the first drop on the Romero fire in California’s Los Padres National Forest.
Meanwhile, the military has continued to also provide boots on the ground in the worst fire years. That includes six Army and two Marine battalions that went to the front lines of the 1988 Yellowstone fires, and seven military battalions that fought Western wildfires in 1994. A battalion from Fort Lewis, Wash., fought fires as recently as 2006.

The Navy and Marine Corps regularly send helicopters and crews to drop water on wildfires in eastern San Diego County, according to Air Force Col. Michael Harper of the U.S. Northern Command Future Operations Division. State governors have simultaneously summoned the National Guard to fight wildfires on the ground and from the air.

“When we have a large number of fires in the country, we run out of resources pretty quickly,” says Dan Smith of the National Association of State Foresters, who works with the National Interagency Fire Center. “The Guard provides a lot of very valuable assets: helicopters for bucket work, crew transport, and in some cases medevac.” The Guard also helps with road closures and in some states supplies trained wildland firefighters on the ground.
MAFFS-equipped C-130s, meanwhile, have fought fires all over the western United States as well as in northern Mexico, Europe and Africa, Harper says. Their 1997 firefighting sorties in Indonesia made the pages of National Geographic.

Firefighting dreams Thompson first dreamed of piloting an aerial tanker as a kid watching the planes fight fires in Northern California. He even spent a season as a ground firefighter for what was then the California Department of Forestry. “Of course, I never thought I’d really get to do it,” he says. Thompson spent nearly eight years flying C-130s for the Air Force before joining the reserve in the mid-1990s, just as the 302nd was becoming a MAFFS wing. The first fire he flew was near his boyhood home in California. “It was pretty cool to go back in one of those planes I watched as a kid,” he says.

Likewise, Lt. Col Alan Brown found himself flying the Squirrel Creek fire in Wyoming’s Snowy Range in 2013, country he had explored while in college in nearby Laramie. “I grew up hunting and fishing and backpacking right close,” says Brown, part of the Wyoming Air National Guard. “You’re helping save stuff that’s right in your own backyard.”

Today, National Guard wings based in Wyoming, California and North Carolina – along with Colorado’s Air Force Reserve Wing – can be summoned to fight wildfires. Each of the four wings retrofits two C-130s for the firefighting mission and keeps 10 crews trained and ready. That training includes an intense weeklong refresher course each spring put on in conjunction with the U.S. Forest Service and other federal land managers.

Only highly seasoned Guard and reserve pilots and crews fly fires. Most served on active duty before transitioning to their current roles. At the 302nd, for example, the average air tanker crewmember has logged 3,500 flying hours.
The specially equipped C-130s are deployed only when the commercial air tankers contracted by the U.S. Forest Service and other land-management agencies can’t keep up with demand.

“The military is not allowed to compete with civilian operators,” Harper says.

The call for an air tanker starts with the incident commander on the ground and works its way up to the National Interagency Fire Center. The request for the C-130 tankers then goes to the Department of Defense through a military liaison.

The wings work out a call-up order before fire season starts, based on their other commitments. This may mean that the North Carolina wing is dispatched to an Idaho fire first because the bulk of Wyoming’s Air National Guard planes and crews are flying combat support missions overseas. The wars in Iraq and Afghanistan made that juggling act difficult, but “we never let the Forest Service down,” Champlin says.

Once a wing is ordered to fly, the Guard and reserve have 48 to 72 hours to prepare crew and aircraft to fly a firefighting, rather than a military, mission.
“That’s the hard part to get across to the public,” Thompson says. “They know there’s C-130s at Peterson. Why can’t they just take off and go? There’s quite a bit of assembly required.”

Beyond mandatory crew rest and lining up tanker bases and lead planes, that assembly includes sliding an MAFFS unit into the back of each C-130 and wiring up the cockpit controls. In addition to a 3,000-gallon retardant tank, the unit has air compressors that send a pressurized stream of retardant out a nozzle in the side of the airplane. “It’s like using a hose, where we can adjust the coverage level and spread it out over varying distances,” Champlin says.

The retardant isn’t dropped on the flames. Instead, pilots try to place a line of retardant in the path of the fire, slowing it down so ground crews can put it out. The C-130s load retardant at one of about 30 U.S. Forest Service tanker bases, as well as Air Force bases when the need arises.

Fighting fires comes with far more uncertainty than military-planned C-130 missions. “You just kind of show up, and a forward air controller (lead airplane) talks you into a dynamic target and environment,” Thompson says. The aerial tankers contend with smoke, flames, wind and the ever-changing situation on the ground, not to mention the need to fly low and slow so the retardant drop is most effective. That means keeping the C-130 at about 150 feet above the ground in high-elevation mountainous terrain on hot summer days, pushing the airplanes to their limits.

“You’re taking roughly 75 tons of airplane as low as it can safely go and throwing 3,000 gallons of goop out of it, trying to hit targets in a few yards of accuracy,” Thompson says. “If they come back and say you saved this or that, there’s nothing better. It’s just as bad when they say, ‘Sorry, you missed. We lost it.’”

‘They’re there for us’ MAFFS wings have flown more than 11,000 hours fighting fires since the early 1970s and dropped an average of almost a million gallons of retardant a year in the past decade alone. Their ability to work as a team, deal with hazardous situations and manage risk “make them invaluable,” Segar says.

Advances in military technology are also becoming important. A drone operated by the California Air National Guard’s 163rd Reconnaissance Wing made its first appearance on the fire line last year. Able to stay aloft for 24 hours, the drone provided real-time infrared video that helped crews track and fight the Rim fire in California. This year, military experts were embedded with wildfire management teams to see if they could help the federal land management agencies improve the use of aerial tankers.

Meanwhile, severe drought conditions – particularly in California and parts of the West – may mean an even greater need for the military’s help fighting fires next summer.

“Predicting fire seasons is really tricky,” Segar says. “It’s still too early to tell. But it’s good to know that they’re there for us.”