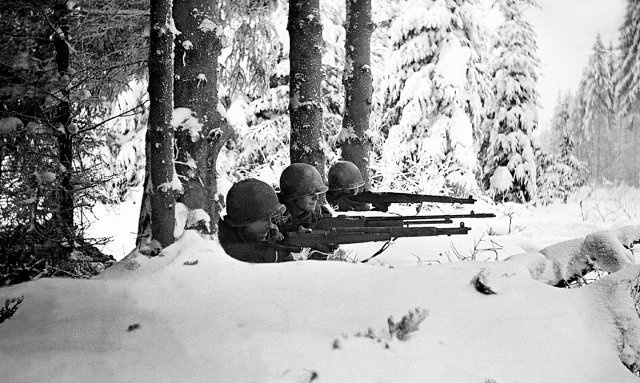 Many U.S. soldiers had only their summer uniforms to fend off the harsh winter conditions. Douglas Dillard and others traded German flags and other collectibles they had captured to U.S. tank crews for their warmer clothing. “Some people didn’t have that much,” remembers Dillard, a retired colonel and president of the Veterans of the Battle of the Bulge Ardennes. “None of us had snowshoes or anything like that.”

For Dillard, keeping the memories of those who did not come home from the battle is a personal mission. “My battalion was destroyed,” he says. “I was with those people from the beginning, the alpha and the omega of that battalion. The general public needs to know what the soldiers, paratroopers and others did when they were there, what they had to go through just to survive. I think the people who survived were just lucky. I really do.”

The Germans referred to it as Unternehmen Wacht am Rhein (Operation Watch on the Rhine), but it became better known as the Battle of the Bulge. It lasted from Dec. 16, 1944, to Jan. 25, 1945, and is known as the bloodiest battle fought by the United States during World War II. Of the more than 600,000 Americans involved in the fighting, 19,000 were killed and tens of thousands were wounded.

Dillard’s group convenes at least annually to share stories of honor, survival and bravery while remembering those who made the ultimate sacrifice. Over Labor Day weekend in Columbia, S.C., the veterans had such a reunion, sharing their stories, questions, passion and humor.

THE FIELD NURSE Katherine Nolan (video here) served as a nurse with the 53rd Field Hospital, which was attached to various infantry and armored units throughout the war. The field hospital team often had only four hours to find a new location, prepare medical tents and be ready to receive severely wounded patients. “Sometimes the incoming wounded arrived before we were ready, so you learned how to set up the hospital in the order they needed it. You improvised a lot,” she recalls.

The nurses’ primary mission was to keep the patients alive and warm. Two potbelly stoves generated minimal heat in the makeshift hospital. Nurses often swaddled patients like babies in whatever blankets they could find. It was hard work, especially given the severe winter. “I’ve been cold since the Bulge,” says Nolan, now 93.
Once a patient was stabilized, he would be evacuated to a full military hospital. “We never heard back about how they made out after they left us,” Nolan recalls. “We often wondered if they made it all the way home.”

Nearly 70 years later, she still wondered what happened to one patient in particular: Hamilton Greene, war correspondent for The American Legion Magazine. Nolan was mentioned in a story about Greene in the February 1945 issue. “There’s a nice girl nurse, Lt. Katherine Greene of Worcester (Mass.), in charge of his ward,” the article says, referring to Nolan by her maiden name.

Nolan says Greene was a model patient. “He was in a lot of pain, but you wouldn’t know it. He always had a smile on his face. He was always very upbeat and, as it mentions in the article, he really helped me with the other patients because he had such a great sense of humor. You would never believe anything was wrong with him. But his wounds were worse than some of the others.”

Unbeknownst to Nolan, after Greene left her field hospital, he recovered fully. He picked up his correspondent duties, and was aboard USS Missouri when Japan formally surrendered. Later, Greene returned home to his wife and two young children and continued to work as a freelance illustrator.

Upon learning, after all these years, that he had survived, Nolan smiled and beamed. “That’s the best news I’ve heard in a long time.”

THE COLLECTOR Irving Locker (video here) describes himself as a short, poor Jewish kid from New Jersey who grew up quickly during World War II. Promoted to staff sergeant at 19, Locker had 65 men under his command in the 116th AAA Gun Battalion in the 1st Army’s 7th Corps. “My promise to them was to bring them home alive.”

Locker and his AAA (Anti-tank, Anti-aircraft and Artillery) battalion fired 90 mm guns that weighed 9.5 tons each and fired shells that measured 3 feet in length, weighed 45 pounds and could hit a target 30,000 feet in the air. “It was the only ammunition that could go through the armor of a German tank,” Locker says.

The unit defended Utah Beach on D-Day and later served a pivotal role in winning the Battle of the Bulge. When the Germans tried to seal in the Allies, Locker’s unit was surrounded on three sides. “We didn’t have ammunition, food or anything,” he says. “We were going into the mortuary to take clothing and boots off our dead GIs to stay warm. We dug through the snow and ice, but the water from the snow and ice came into the hole where we slept. It was below-zero weather, and we lived through it. It was very difficult.”

As the war drew nearer to ending, Locker’s unit came across Nazi death camps. “Anybody who says the Holocaust never happened, better talk to me. ‘Cause I know what happened.”

Locker collected Nazi memorabilia and propaganda, which he still uses today to educate community groups, students and others about the atrocities he saw firsthand. At times, items in his collection serve as a link between families and their World War II ancestors.

A few years ago, Locker met a younger man where he lives in The Villages, Fla. The man’s father died in the war when the boy was only 18 months old. Prompted by the discovery of Locker’s name in one of his father’s Army books, the man visited him to view the artifacts.

“His father signed this flag that I took off a wall in Berlin,” Locker says. “He was in my outfit, but I didn’t know him real well because men routinely got transferred in and transferred out. Later, the young man came over to my house to see the flag and held it to his cheek and cried. It was absolutely amazing.”

THE LIQUIDATOR Mike Levin (video here) was a field artillery observer during the Battle of the Bulge. The second lieutenant’s duty was to get as close to the Germans as possible, observe their movements and radio back firing instructions.

“I used to get as far forward as I could safely, which wasn’t too safe because I was the first one the Germans would see,” he recalls. “They looked for a guy with a bar on his helmet. So I used to take some mud and cover it up, and I used to cover the binoculars, too. Because the Germans knew what the guy with the binoculars was doing.”

Levin mourns the friends he lost but prefers to focus on stories that evoke humor in the darkness of a war zone. “You are bound on occasion to think of the guys you left over there, and I do that,” he says. “When I tell war stories, and I occasionally do, I don’t like to tell stories of the dead, dying and wounded. I like to tell lots of funny stories.”

One such story occurs after the Battle of the Bulge, when Levin was directed to head toward the town of Bad Godesberg along the Rhine. There, he found a giant hotel, the Rheinhotel Dreesen.

Levin says it had been evacuated except for “an old caretaker who had a big brass ring loaded with keys.” Levin ordered his men to set up radio communications while he checked out the entire hotel with the caretaker.

“We went to the basement where there was a long corridor with a heavy oak door at the end,” he says. “I thought, that looks interesting to me. I told the old man, ‘Öffnen Sie die Tür’ (open the door). He says, ‘Ich glaube nicht, einen Schlüssel für diese Tür haben (I don’t have a key for that door).’ I didn’t believe him. I reached for my .45 and pulled it out, and said, ‘Ich habe einen Schlüssel für diese Tür bekam’ (I’ve got a key for that door). He says, ‘Nein nein nein.’ He found a key.”
Inside the room, Levin found one of the biggest wine cellars in western Germany. Hundreds of bottles had been looted from the French and stored there.

“There were not only wines but liquors and other stuff,” he says. “I put a few cases in my Jeep, but a Jeep can’t carry much. The halftrack carried some more cases. But I had hardly dented the stash, so I reluctantly called the division and told them to get the special service officer down here with some big trucks. They did, and they emptied out the wine cellar and distributed them throughout the 7th Armored Division.”

None of Levin’s stash made it home. “It was fantastic. I consumed the wine on the spot. It was good stuff.”

Henry Howard is a deputy director for The American Legion’s Media & Communications Division.