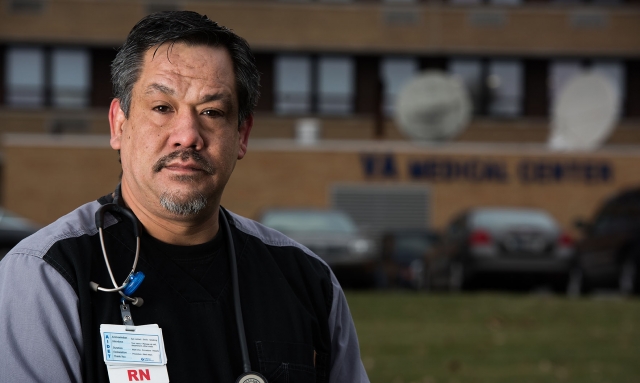 When G. Bill Kilgore left the Navy in 1998, he thought his eight and a half years as a corpsman serving with Fleet Marine Force would – or should – open a few doors to a career in civilian medicine at home in Fort Wayne, Ind. He knew that military training is second to none, and was certain that no other on-the-job experience in health care could compare to treating wounds in the heat of battle.

But Kilgore’s expectations did not meet reality. It took him over a decade to become a registered nurse. In the meantime, he took a factory job, but he was laid off when the economy recessed. He filed for unemployment benefits so he could take classes to get his nursing license.

Things might have turned out very different if Kilgore had lived in a state where military training gives combat corpsmen like him the opportunity to test for nursing licenses based on their résumés from the armed forces.

“When I came home, there wasn’t really anything in place for me as far as what I had done for eight and a half years,” Kilgore says. “It didn’t convert over to anything. In some states, if I had been a corpsman and I had the experience I had, I would at least have been eligible to test either against the RN board or the (licensed practical nurse) board.”

Kilgore’s story is a common one among veterans who have separated from the military in the past two decades. He left the military trained and more proficient than most of his civilian counterparts pursuing the same field. But he was forced to jump through administrative hoops that ultimately delayed his career.

Missing at that time was any legislation that would allow military training like Kilgore’s to count toward requirements to earn his professional license in a civilian career – known commonly as military licensing and credentialing laws. The first step toward bridging the gap came in 2012 when President Obama signed the Veterans Skills to Jobs Act, which counted military training toward requirements necessary to earn civilian occupational licenses for federal jobs.

With veterans like Kilgore in mind, The American Legion had been fighting for the passage of such a law since 1996. Still, the process for a veteran to get licensed isn’t as easy as showing up in an office with a DD-214 proving relevant military training. Conflicts between federal and state requirements for licenses and credentials complicate the issue, which remains far from resolved around the country.

Fighting it out in the statesThe battle for licensing and credentialing laws is now being waged in state general assemblies and legislatures. Federal law can only reach occupational licenses in certain regulated fields, such as aerospace, agriculture, maritime transportation and communications. The licensing of most professionals – including nurses, paramedics, truck drivers and teachers – belongs to state law. And the licensing protocol is often left to a state’s individual agencies, which can be problematic, says Elizabeth Belcaster, spokeswoman for the International Brotherhood of Teamsters.

The Department of Defense has instructed state licensing offices to allow equivalent military experience to fulfill requirements to receive state licenses, but vague wording – and the non-binding effect of a federal mandate on a state agency – has left implementation up to local offices. This results in inconsistencies in licensing protocol, even among offices in the same state, Belcaster says.

“If a veteran has his military (commercial driver’s license equivalent) and has separated within 90 days, he can come into the Secretary of State’s office in Illinois, and they will waive the driving test, but that doesn’t mean they are going to waive the permit test,” she says. “That process is something that each office and each administrating office for certifications and credentials identifies a protocol for.”

Legionnaires at the state and post levels have responded by lobbying their legislatures and general assemblies to pass new licensing and credentialing laws in their states. All 50 states have now passed some form of legislation in this area, thanks in part to strong Legion advocacy. But their work is far from done.

In 2012, the New York State Department of Labor launched the Experience Counts initiative, which streamlines many state licensing processes for veterans. Supported by the Legion, the initiative includes commercial driver’s license (CDL) road test waivers for veterans who drove trucks in the military. However, veterans are still required to take the written portion of the test and pay the corresponding testing fee.

Mackenson Vil, a Brooklyn, N.Y., native and former Army truck driver, says he took advantage of that waiver to upgrade his CDL from Class C to Class B after separating last November.

“It is a really efficient system,” Vil explains. “To be honest with you, I didn’t know what I was going to do. I was stressing out because I thought I wasn’t going to be able to find a job. I was looking all over.”

The Teamsters, with whom the Legion has collaborated to tackle the complicated issue of licensing and credentialing, took notice of Vil and got him behind the wheel of a rig.

“The Teamsters are the ones who put me in a truck,” he says. “They really looked out for me.”

Belcaster is satisfied there’s been progress, but she’d like to see a lot more.

“We’ve come a long way from five years ago, but now we have to figure out the process for implementing this on the civilian side,” she says. “Industry by industry, that is going to look different, so there is still a lot of work to do.”

An ‘economic story’ Licensing and credentialing legislation for veterans has been an easy sell for Legionnaires because it makes good economic sense, says Dale Barnett, chairman of the Legion’s Veterans Employment & Education Commission. He was part of a team of Georgia Legionnaires who fought for passage of an expansive state law that created a special committee charged with determining which state licenses would allow waivers based on military training.

Passed in April 2012, the Georgia law was a huge success because it allowed waivers to be granted on an ad-hoc basis rather than targeting licenses in a specific industry. It also allows for waivers for military spouses who have been forced to relocate to the state due to change of station.

The laws’ economics are easy to understand, Barnett says. The military – and the taxpaying public – have already paid for these veterans to be trained. Forcing them to spend taxpayer-funded education benefits on certification classes is the equivalent of paying for them to be trained twice, and it places an unnecessary burden on veterans trying to make the transition to civilian careers.

“It is just good common-sense legislation that does not provide any special privileges to (those who served in) the military, but allows them to receive credit for what they have already accomplished in the military,” he says.

The plain logic of the legislation was the main selling point for the Teamsters, too.

“It is very much an economic story,” she says. “If you’ve got a thousand soldiers from one area who are not working, it impacts the whole society and the whole country.”

A grassroots outlook The Legion’s efforts to improve state licensing and credentialing laws have been a priority since it had its first roundtable discussion on the issue in 1996 and the Veterans Skills to Jobs Act was passed in 2012. In 2009, the unemployment rate for veterans sat at 14.5 percent; it has since dropped to 6.9 percent. Belcaster says it is no coincidence that the decline coincides with the improved licensing legislation.

“We should have looked at this a long time ago,” she says. “But we’re here now, and we have created some great pathways. Veterans have been impacted by the numbers.”

The work, however, is far from over. Starting this winter, the Teamsters – with logistical support and backing from The American Legion – will begin offering civilian CDL training to enlisted military truck drivers. The training-to-placement program will set up shop on military bases and offer drivers the opportunity to earn their civilian CDLs before they are discharged.

“Our industry is in dire need of truck drivers,” says James P. Hoffa, Teamsters general president. “We certainly want to transition these talented individuals from the military to private industry.”

This month, The American Legion will host its second National Credentialing Summit in Washington  to identify best practices for implementing state laws and lobbying for new ones. The Teamsters, policymakers and other key stakeholders will be part of what is expected to be a collaborative discussion.

The goal is for all relevant military training to be considered for licensing and credentialing requirements, regardless of the various reaches of state or federal law, Barnett says.

As it stands now, too many military medics and corpsmen – such as Kilgore in Indiana – are unable to take their registered nurse tests based on military experience, but they could if they lived in Arizona, South Dakota or New Mexico, among other states.

“It’s simple,” Kilgore says. “If you can pass the test, that says you have the information and the proficiency to be a nurse. What you do from there is on-the-job training. That’s what makes a nurse.”

Andy Romey is an assistant editor for The American Legion Media & Communications Division.