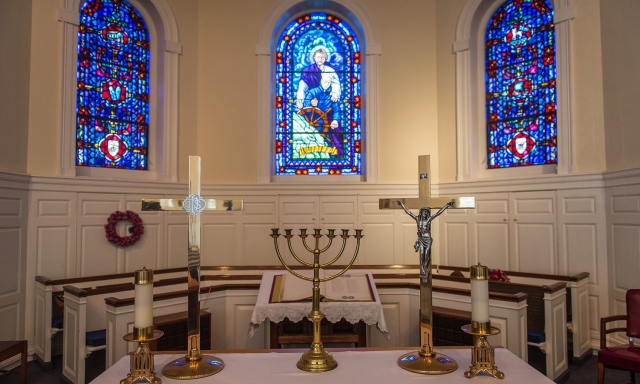 Built in 1942, the old chapel at the former Philadelphia Naval Shipyard is a fitting place to honor the memory – and promote the legacy – of four of the nation’s most revered brothers in arms.

Entering the building, visitors’ eyes are immediately drawn to its original stained glass murals, which depict divine guidance at sea. Next, they notice a menorah flanked by a Protestant cross and a Catholic crucifix.

Finally, looking around, they see portraits of the chapel’s namesakes. To the left of the wooden pews are the Rev. George Fox, Methodist, and Rabbi Alexander Goode, Jewish. To the right are Father John Washington, Roman Catholic, and the Rev. Clark Poling, Reformed Church.

This is the Chapel of Four Chaplains, born of one of World War II’s most inspiring stories: four men of different faiths, on a rapidly sinking Army transport, giving up their life vests so that others might survive.

“Across the country, there are more than 300 memorials, plaques and statues dedicated to the memory of the Four Chaplains, but there’s one that started it all, and that’s here,” says Christine Beady, the chapel’s executive director.

As much an ideal as a location, the chapel wasn’t always at what is now the Navy Yard. On Feb. 3, 1951 – eight years after USAT Dorchester was torpedoed by a German U-boat off Greenland, killing 672 of the 902 officers and enlisted men, merchant seamen and civilian workers aboard – President Harry Truman dedicated an interfaith shrine and memorial to the four Army chaplains at Temple University in Philadelphia, in the lower level of the Baptist Temple.

“A sanctuary for brotherhood,” the Rev. Daniel Poling, Poling’s father and the pastor of the church, called it. He worked tirelessly to establish the chapel, enlisting the help of supportive individuals and groups, including The American Legion. His message was unity and cooperation among people: “All races and faiths, all colors and economic degrees, living together and working together as Americans all.”

The original chapel had a Byzantine design, with five stone arches on large columns on each side of the nave. The center arch to the west framed bronze memorial tablets listing the names of those who perished in the Dorchester sinking. The center arch to the east faced a 6-foot-by-10-foot Nils Hogner painting of the chaplains’ final moments. Surrounded by rising waters and panicked men, their faces are calm as they hand their life vests to some and force them onto others.

In 1974, the Baptist congregation moved out, and the Chapel of Four Chaplains rented the building from Temple University until 1990, when structural problems and talk of demolition necessitated a move. Furniture, artwork and memorial plaques went into storage as chapel staff opened a temporary office at a strip mall.

The plan was to build a chapel complex on land acquired near Valley Forge, but trouble dogged the project. Fundraising lagged, and as time went on nearby homeowners – concerned about local traffic – vigorously opposed construction.

About that time, the Philadelphia shipyard closed, and the city began to reinvent the area as a waterfront business park. The chapel’s board of directors saw an opportunity to avoid high costs and a construction project by moving into an existing building – and one connected to the military, at that. They signed a lease in 1999, and in 2001 the Chapel of Four Chaplains returned to Philadelphia. With the exception of a 9/11 memorial service and occasional events, though, its doors were closed until recently.

“They kind of remained quiet, not really sure if this would be their permanent home,” says Beady, who came on board in 2012. “After 13 years, I’m pretty sure it is.”

Out of the wilderness Lou Cavaliere, a retired Navy captain and chairman of the chapel’s board of directors, says there’s no better location than the Navy Yard. As the nephew of a Dorchester survivor, he understands supporters’ confusion and even hurt over the decision to abandon building a new chapel. But when he’s asked if that project will ever happen, his answer is “no.”

Conceding that there was “dysfunction” in the organization, Cavaliere says the chapel sold off its remaining property at Valley Forge, and nearly closed after years of deficits. Now, with Beady, he wants to reacquaint Americans with the Chapel of Four Chaplains.

“The more we reach out, the more we’re going to get back, and that’s exactly what’s been happening,” Cavaliere says.

With the board’s blessing, Beady opened the doors to the public and put many of the chapel’s treasured possessions back on display.

A collection of photos and paintings pay tribute to Dorchester and its escorts, the Coast Guard cutters Comanche and Escanaba, which pulled survivors from the icy waters. There’s also Dudley Sumner’s famous painting of the Four Chaplains huddled on deck, heads bowed and arms linked.

There are personal items, too, tied to the chapel’s history and mission, including debris from Ground Zero in New York, brought back by the chapel’s Emergency Chaplain Corps; a New Testament belonging to a Korean War POW who was baptized by the Rev. Daniel Poling as a youth; two 19th-century Torah scrolls; and a replica of the Medal of Heroism, a special award authorized by Congress and given to the chaplains’ families in 1961.

Most important to Beady was bringing in the Dorchester memorial plaques. “I sat in the sanctuary, looked at them and said, ‘I get it,’” she recalls. “This is their cemetery. We were not respecting 672 people or their families by keeping those plaques in storage for 20 years. We are happy to honor them now with a permanent display.”

In fact, the plaques have yet to be mounted on the walls. “Most of our guests who travel to see them are in their 80s or 90s,” Beady says. “They are the spouses, the siblings, of the people on those plaques. They want to touch their names. For them, those five plaques are their tombstones.”

The chapel requests donations but doesn’t charge a fee to enter. By making the building available as a venue for special events, Beady hopes to cover the costs of keeping it open. Donor monies should be used strictly for the chapel’s programs.

Several couples married at the chapel last year, and it hosted its first baptism in several years. A former shipyard worker whose son was christened here wanted the same for his grandson.

One day, perhaps not too far off, the Chapel of Four Chaplains may again offer religious services. The Navy Yard is planning residential development in five to 10 years, and the chapel has been in contact with local congregations about the possibility of weekly Shabbat, Mass or worship.

Selfless service Through the ups and downs, with a building or without, the chapel has had one constant: its Legion of Honor program. Over the decades, thousands have received certificates and pins for documented acts of selfless service in the spirit of the Four Chaplains – “ordinary people out there doing extraordinary things,” Cavaliere says.

The chapel also awards medallions to those who have received widespread recognition for their contributions to the general good or acts of compassion. The rarest is the Charles W. David Jr. Lifesaving Medallion, named for a black steward on the Comanche who dived into freezing waters to rescue dozens of Dorchester’s survivors. He contracted pneumonia and died soon after.

People sometimes assume the Legion of Honor is a local program, but it’s national, and all awards go through the chapel, Beady says. Nominations are accepted from prior recipients, as well as leaders of civic, fraternal and veterans organizations, including The American Legion.

In fact, the Legion remains one of the Chapel of Four Chaplains’ biggest backers. Hundreds of posts provide some measure of financial support, and observe the annual Four Chaplains Day with ceremonies or memorial services.

Bill Reno grew up hearing about the Four Chaplains from his father, a World War II submariner. His enthusiasm for their legacy led him to become the chapel’s regional director for Florida. As chaplain of Palm Valley Post 233, Reno organizes one of the largest known Four Chaplains events for the department’s 5th District. What began a decade ago with 50 people in attendance has become standing room only; he’s considering moving it into Jacksonville’s Veterans Memorial Arena next year.

“If anybody can leave without tears in their eyes, they’re stronger than me,” he says. “These are four American heroes, and as long as I’m alive I’ll never stop recognizing them.”

Such conviction is key to keeping the chaplains’ memory alive – and to the chapel’s mission of encouraging future generations to follow their timeless example of brotherhood, cooperation and service before self.