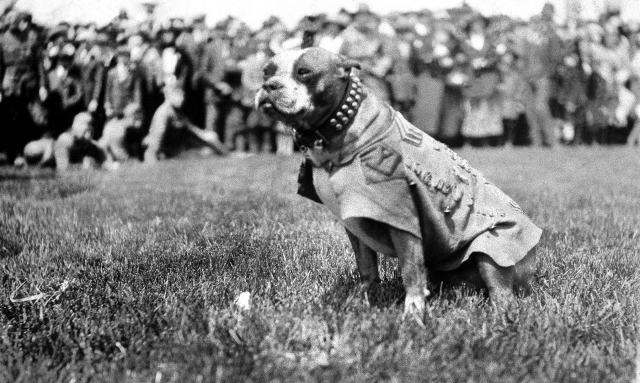 Stubby was his name – not for his stature, which indeed was short and even stubby, but for his tail, which indeed was a stub. He went into the war a dog, suffered honorable wounds and overcame gas attacks. He came out a hero and decorated sergeant who had learned how to salute.

According to the Smithsonian, where a “stuffed” Stubby resided for many postwar years, the mongrel’s story began when he wandered into the National Guard training encampment at Camp Yale in New Haven, Conn., shortly after the United States entered the war in April 1917.

Naturally, the men of the 102nd Infantry Regiment, most of them from the New Haven and Hartford areas, took to the short-legged visitor, who became both the unit mascot and the special pet of Pvt. Robert Conroy.

Soon, according to the Smithsonian’s website, “he learned the bugle calls, the drills, and even a modified dog salute as he put his right paw on his right eyebrow when a salute was executed by his fellow soldiers.”

It wasn’t long before the Yankee Division shipped out for France aboard USS Minnesota, with Stubby stowed in a coal bin below decks for the trip. On the far side of the Atlantic, he was smuggled ashore but was discovered by Conroy’s commanding officer.

Animals, pets or not, were forbidden, so this was trouble. Surely he would be sent back, abandoned – but no, the Smithsonian says: “The CO allowed Stubby to remain after Stubby gave him a salute.”

From then on, through thick and thin, he remained with the Connecticut doughboys for a total of 17 battles.

The 102nd didn’t reach the front lines until early 1918, with Stubby soon acclimated to the bangs and booms of the surrounding gunfire. According to the Smithsonian, after being briefly hospitalized by a gas attack, he became the 102nd’s own canary in the coal mine. With his superior sense of smell, he would begin barking in warning the instant he detected the slightest whiff. He also helped his human companions locate wounded comrades in the no-man’s-land beyond their front trenches.

But his greatest feat of all came the day he discovered and helped capture a German soldier who had crept close to the Americans and was mapping their trench lines. That’s when Stubby was promoted to sergeant and became the first dog to be given rank in the U.S. military.

He went on with his remarkable career but again was sidelined by injury, this time by shrapnel from a grenade to the chest and foreleg. “He was rushed to a field hospital and later transferred to a Red Cross Recovery Hospital for additional surgery,” adds the Smithsonian account. “When Stubby became well enough to move around at the hospital, he visited wounded soldiers, boosting their morale.”

After the war, Stubby came home with the now-Cpl. Conroy, who became a law student. A chamois blanket given by a group of French women displayed all his medals.

Sgt. Stubby was soon a nationwide celebrity. He was made a lifetime member of the Red Cross, the YMCA and The American Legion, and marched in Legion parades and attended Legion conventions all over the country. He visited U.S. presidents Woodrow Wilson, Warren G. Harding and Calvin Coolidge, and is said to have shaken his right paw with each. When Stubby died in 1926, The New York Times published his obituary.

The Stubby story may not end there. As the Georgetown University football mascot for a time, Stubby was known to entertain the crowds during halftime, historians say. Some have speculated that these acts were perhaps a start to the highly elaborate halftime shows of today.

This article is adapted from the book “Best Little Stories From World War I” (Cumberland House, 2014), by C. Brian Kelly and Ingrid Smyer.