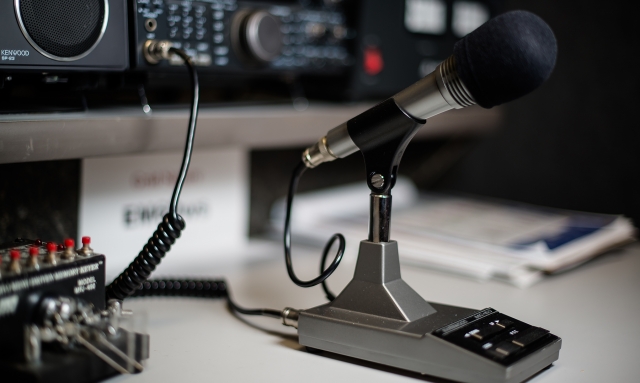 What comes to mind when you hear the term “ham radio”? Maybe, when you were a kid, it was the fellow with the tall tower in his backyard that was blamed for causing squiggly lines on neighborhood TV screens. Or the guy at work with antennas bristling from his car who spends his lunch hour eating a sandwich and talking on a radio. Or maybe you’ve read a news story about “ham” operators helping in the aftermath of a natural disaster.

Whatever your impression of the hobby, you may have no idea how dynamic and fun ham radio is, or just how crucial it can be when other forms of communication fail. And it’s a perfect fit – both nationally and at local posts – with many American Legion missions, including civil defense.

Every time you send a text on your phone, watch a TV show or use Wi-Fi at a coffee shop, you use technology developed in part by early hams – an old railroad telegraphers’ term for “inexperienced operator” – experimenting with newly invented radio in their basements and attics. And throughout amateur radio’s 100-year history, these cellar alchemists have helped create and refine innovations in the field. Meanwhile, others have helped save lives and ease human suffering during catastrophic events such as 9/11 and Hurricane Katrina.

Along the way, they’ve formed a tight-knit community that has a heck of a good time.

In the early 1900s, with radio in its infancy, its possibilities appealed to a group of early adopters. They took the work of scientists and pioneered the first practical uses of wireless technology. Meanwhile, world governments saw the need to formalize regulation of this new communication medium to prevent on-air chaos. In the United States, the Federal Radio Commission was created for that purpose. Most regulatory agencies recognized the contributions of those early hams  and saw them as a willing and valuable resource. They designated portions of the radio spectrum for amateurs to continue to experiment and provide backup communications as a public service.

Fast forward a century, and the hobby is still as vibrant as ever. This surprises some people, who assume that smartphones, Facebook, online chat rooms and texting have made a pastime like ham radio obsolete. Yes, communicating with others is the ultimate goal of amateur radio enthusiasts, and there are plenty of ways to do that these days. But there is so much more to the hobby than simply talking to another person.

It can be difficult to convey the attraction to others, but there is a certain magic in connecting with another person using a radio station that you put together yourself, possibly one you designed and built from scratch. There’s a thrill that comes from bouncing a signal off the atmosphere – maybe even off a satellite, the surface of the moon or the tail of a comet – using newly developed digital modes of communicating, and conversing with someone who shares that passion, whether he’s down the street or on the far side of the globe.

Amateur radio is not for everyone. But for those who are interested and want to join in, it can be an almost perfect avocation, offering opportunities for learning, experimenting or combining the pastime with other interests.

Campers, whether in RVs or tents, take radios with them for companionship and emergency situations when other means of communication are unavailable. Some hams hike to mountaintops or venture to remote islands with tiny, low-power transceivers and portable antennas, putting those locations on the air for others around the world to contact. Many use radio to control model aircraft, boats or robots, or as payloads in weather balloon launches. A wide range of special-interest groups meets regularly on the amateur radio bands in what are called “nets,” discussing such subjects as antique cars or gardening. There are nets, too, for veterans to connect on the air and talk about their experiences.

Those with technical flair learn, design, build and try out new ideas. Right now, satellites designed and built by amateurs are orbiting the earth and can be accessed by other hams using relatively simple gear. Computer technology is a big part of amateur radio today, and the latest advances in combining digital content with radio frequency waves put today’s hobbyists on the cutting edge just like their predecessors a century ago. Others pay homage to their forerunners by restoring and repairing antique radio gear and returning it to the airwaves. For many, amateur radio has been the gateway to careers in engineering, electronics and communications.

However, technical aptitude is not required to join the fun. The hobby offers plenty for those not electronically inclined. For example, many enjoy what they term “radiosport,” using their radios and the airwaves for spirited competition and contacting as many other stations as they can in a set period of time. “Fox hunting” – searching for a hidden transmitter – is a popular activity. Others work toward awards for contacting as many fellow hams as they can in countries around the world.

Of course, many amateur radio enthusiasts simply enjoy having conversations with a group of friends or someone new each time they fire up their stations. You never know who you might encounter on the ham bands. That leisurely chat might be with a music or TV star, a member of Congress, the king of a European country, an ice fisherman on a lake in Manitoba, a Nobel Prize winner, a missionary on a South Pacific island, a group operating from an isolated chunk of glacier in the Antarctic or even an astronaut in outer space. Most crewmembers aboard the International Space Station are licensed hams and frequently converse with school groups and other individuals back on Earth.

Ready to serve With all this fun, competition and camaraderie, it is important to note that amateur radio has a serious purpose, too. When the Federal Radio Commission – now the Federal Communications Commission (FCC) – created the amateur radio service, it made it clear why hams deserved vast slices of the radio spectrum. One, as mentioned, was to allow them to continue experimenting and contributing to the field. The other was to provide a pool of trained operators with working radio stations to assist in providing emergency communications.

But have cellular technology, satellites and the like negated the need for amateur radio operators in emergencies? We only have to consider recent events – wildfires in the West, a volcanic eruption in Japan, Superstorm Sandy in the Northeast, the terrorist bombing at the Boston Marathon – for examples of normal communication infrastructure becoming overwhelmed or failing completely. In each case, hams were called upon, and they were ready to serve. When Hurricane Katrina devastated the Gulf Coast in 2005, the first structures to topple were cellphone towers. When tornadoes ripped through Alabama in 2011, hams were on the ground, first as trained “storm spotters” helping track the storms for the National Weather Service. Then they operated around the clock for weeks afterward, assisting relief operations.

From the American Red Cross to The Salvation Army to the Federal Emergency Management Agency (FEMA), numerous organizations rely heavily on amateur radio groups. The American Legion has been closely aligned with the hobby since the 1930s and signed a statement of affiliation with the Department of Homeland Security (DHS) in 2006. That agreement was reaffirmed last year in “Disaster Preparedness and Response for American Legion Posts,” a handbook published by the Legion. Also, at the 92nd National Convention in Milwaukee in 2010, the Legion adopted Resolution No. 134, which urges posts and departments to assist DHS efforts in local communities – including disaster preparedness, which dovetails perfectly with amateur radio and its purpose.

But it doesn’t take a major disaster to demonstrate the value of amateur radio. Hams regularly provide communications for bicycle races, charitable running events and civic festivals. Operators are often involved in rescues of injured hikers or climbers, boats in jeopardy at sea or groups endangered by sudden weather. As we know, cellphones do not always work. Hams have plenty of experience in communicating under marginal conditions and regularly employ those skills to help others.

How to get started A good first stop to learn more about amateur radio is the website of the American Radio Relay League (ARRL) at www.arrl.org. ARRL publishes books, study guides and other materials to help beginners get started and gain the most from the hobby.

A license is a prerequisite, and that requires passing an examination. You only need a basic knowledge of radio theory, operating practices and FCC rules. Many study guides and online teaching programs are available. While the material requires some study, it is not daunting. Children younger than 10 have passed the test and received their licenses.

At one time, would-be amateur radio licensees were also required to pass a Morse-code proficiency examination. That is no longer the case. Morse code is still used by ham radio operators alongside 21st-century modes of communication, but it is no longer necessary to know the dots and dashes to obtain a license.

The test is administered by volunteer examiners. The ARRL website can be used to find nearby amateur radio clubs and exam sessions. A Google search for “amateur radio club” plus your city or state can also be a good guide to locate active clubs or groups near you. Many clubs offer free or inexpensive license-exam preparation classes. When you receive your license – and your own unique radio call sign – clubs can also help you put together a station and get on the air, so that you can start helping in public service and emergency communications.

If there’s already a club or a station at your American Legion post, the active amateurs there can tell you more about the hobby and how it can further the Legion’s mission.

If you know a post member who is already a licensed ham, suggest that he or she contact The American Legion Amateur Radio Club (TALARC) and join if not already a member. The club can offer ideas for how each post can participate, from conducting exam preparation classes to starting a ham radio station at the post for use by licensed Legionnaires.

The hobby of amateur radio continues to evolve, providing unique opportunities for education, experimentation, fellowship and public service. It fits well with other interests. It is also an enjoyable pastime that can be pursued no matter a person’s age or health.

Most of all, amateur radio is simply a lot of fun while offering the chance to give back to your community and country. That is why so many hams, particularly veterans, consider their hobby to be just about perfect.

Don Keith is a former award-winning broadcaster and the best-selling author of more than a dozen books, including “Riding the Shortwaves: Exploring the Magic of Amateur Radio.” He has been an active amateur radio operator since he was 13. His call sign is N4KC. Visit his website at www.donkeith.com.