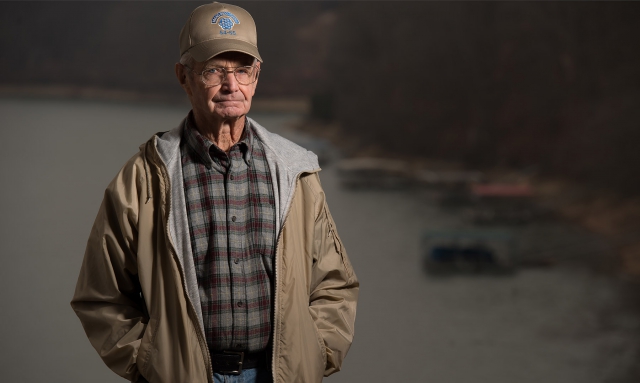 Just before the Army sent Jable Dean to Vietnam in 1954, it outlined a simple emergency evacuation plan: “If we have to pull out, get to the Saigon River,” Dean recalls the Pentagon briefer telling him. “And if we can’t get to you, we don’t know you.”

Dean survived his yearlong mission and became part of one of the most forgotten cadres of the U.S. military: servicemembers who were shot at, bombed, captured and killed in the decade-and-a-half prelude to the official start of the Vietnam War. Rarely are they acknowledged as combat veterans. It’s as if the words Dean heard before heading to Vietnam – “we don’t know you” – still echo.

“They were as dedicated as any soldiers involved in previous conflicts,” says author and retired soldier Ray Bows, who served in Vietnam in 1968 and 1969. “Not only are they the senior class, they are the unsung heroes of the Vietnam War. But their status as Vietnam veterans is totally ignored by the U.S. government.”

The U.S. Military Assistance Advisory Group (MAAG), the Army Security Agency (ASA), the Temporary Equipment Recovery Mission and other groups – official and unofficial – served from 1950 through 1964. They supported French efforts to retake its former colony following World War II and then backed South Vietnam’s efforts to deflect the Viet Minh, Viet Cong and North Vietnamese after the French were defeated in 1954. A mix of World War II veterans, Korean War veterans and new recruits, they were prohibited from carrying their service weapons and many wore civilian clothes. Nevertheless, they gathered intelligence, trained soldiers, transported Catholic refugees out of the north, flew reconnaissance, took casualties and were sent home with orders not to talk about their time in Southeast Asia. That secrecy became a curse for many of them, part of the veil that hides their service and sacrifice.

“The thing that bothers me is none of this is out there,” says Wayne “Maddog” McCaughey, who served with MAAG in 1960. “You pick up a book on Vietnam, and it says it all started in 1965. If we had not been there, the South Vietnamese government probably wouldn’t have survived.”

Routine mission MAAG’s arrival in Vietnam in 1950 wasn’t necessarily remarkable. The United States had more than 40 military assistance groups stationed around the world between 1946 and 1960. “We had MAAG Laos, MAAG Ethiopia, even MAAG Finland,” Bows says. The difference was the job hazards that came with Indochina. “Of all the 44 MAAG groups around the world, the guys who got caught up in the bombings and shootings were those assigned to MAAG Vietnam.”

At least 60,000 served in Vietnam prior to 1965, the majority from 1961 to 1964, says Andrew Birtle, chief of the military operations branch at the U.S. Army Center of Military History in Washington. The United States was allowed to have about 340 MAAG personnel in the country in the early years under the terms of the Geneva Accords, McCaughey says. When MAAG Indochina became MAAG Vietnam in November 1955, there were 746 U.S. servicemen in country, Bows adds. That was augmented by the 350-member Temporary Equipment Recovery Mission that primarily served as clandestine reinforcements for MAAG.

Reluctant recruit Dean had no intention of going to Vietnam when he joined the Army in 1953 to escape his job at a golf-club factory in Tennessee. He was approached by “two men with badges” while in cryptology school at Fort Gordon, Ga. They told Dean they were recruiting volunteers to go to Indochina. Dean declined; he had recently become engaged. The men insisted. “I just accepted the fact there was nothing I could do about it,” he says.

Dean went to Washington for a two-week briefing. He purchased two alligator-skin Samsonite suitcases, filled them with civilian clothes and headed out.

When he arrived in Vietnam in August 1954, Dean was sure he was in the wrong place.

“It was hot, I was sweating and it smelled terrible,” he recalls – a common recollection among MAAG veterans who arrived in Saigon to find its open sewers, rotting garbage dumps and overpowering smog. He worked rotating shifts – days, swings and then midnights – encoding and decoding messages from around the world. He lived in a hotel on the Rue Galliéni, and woke up one night in April 1955 to tracers zinging down the street as forces loyal to President Ngo Dinh Diem battled a powerful sect led by a man named Ba Cut.

Dean and a fellow American watched what became known as the Battle of Saigon unfold in the streets below their hotel over the next three days. It seemed harmless until the bullets came their direction. “We’re standing up there watching guys throw white phosphorus mortars and somebody cut down on us,” he says. “Talk about getting inside quick.”

Even so, Dean photographed the battle and came home with a set of black-and-white images nearly identical to some of the photos that appeared in Life magazine that spring. “It never crossed my mind I might get hurt,” he says. “When you are young and full of piss and vinegar, it doesn’t bother you as much as it does later on.”

Terrorist strike Bill Pratt was more shaken by his brush with death. Communist insurgents rolled a bomb under the U.S. military bus Pratt boarded in front of the Metropole Hotel in Saigon the morning of Oct. 22, 1957. A tornado of smoke and shattered glass ripped through the heavily damaged bus. Thirteen U.S. servicemen and five civilians were injured. Eight were medevaced to Clark Air Base in the Philippines.

“I played and replayed the sights and sounds over and over in my mind,” says Pratt, who was headed to his job with the MAAG engineer branch when the bomb went off. “No one perished simply because the bus was fueled by diesel instead of gasoline, preventing a huge fire that probably would have killed all of us.”

Equally miraculous: a gasoline station next door to the hotel didn’t go up in flames.

The bus attack was accompanied by a simultaneous bombing at the U.S. military’s officers’ quarters in Cholon a mile away, which injured four Americans.

Another bomb was detonated at the U.S. Information Service library elsewhere in Saigon, but the building was unoccupied.

The bombings captured a few headlines in the United States, as well as the attention of Pratt’s mother. She contacted the Red Cross to inquire about his welfare. As a result, Pratt was called before Gen. Sam Williams to explain why he wasn’t writing home. Otherwise, it’s as if the three attacks never took place.

“I fail to understand why history basically ignores the coordinated attacks in Cholon and Saigon on that day,” Pratt says. “Sadly, many of those involved in the incident cannot even be credited with service in Vietnam because their official discharge records failed to specifically state they served in Vietnam. Instead, they only receive credit for ‘foreign service.’ Somehow this seems unfair.”

Two years later, Maj. Dale R. Buis and Master Sgt. Chester M. Ovnand were killed when Viet Cong attacked the MAAG compound at Bien Hoa, 20 miles northeast of Saigon. The deaths of these two soldiers in July 1959 also received passing news coverage and faded from view. “I’m sure the U.S. government would have suppressed it if they could have,” says Bows, who chronicled the attack in his book “First on the Wall.” Williams, commander of U.S. MAAG in South Vietnam, was worried about the North Vietnamese coming across the 17th parallel, much the way the North Koreans had come across the 38th parallel on the Korean peninsula.

“He was far less concerned about terrorist attacks and bombings,” Bows says. “For him, two soldiers getting killed at a compound in Bien Hoa was not of great significance in regard to the overall big picture.”

Prisoner of war The first U.S. prisoner of the Vietnam War came from the MAAG ranks. But it took George Fryett decades to convince VA that he was held by the Viet Cong for more than six grueling months, during which he expected to be executed at any moment.

Fryett was in charge of classified documents at MAAG headquarters. But on Christmas Eve 1961, he headed out of Saigon on his three-speed bicycle in search of a swimming pool in Thu Duc – a leisurely outing he thought was safe. He was jumped by Viet Cong insurgents after turning down a side road he assumed led to the pool. The U.S. military searched extensively for Fryett, but the Viet Cong kept him moving, twice even taking him into Cambodia.

“It seems that every time the choppers or artillery came close, I was moved,” Fryett says.

He estimates he marched 500 miles as a prisoner with a rope around his neck and his hands tied behind his back. Although his release and return home in June 1962 was widely publicized, it failed to register with some of the people he dealt with in the United States.

“When I came down with a temperature of 104, I went to the Fort MacArthur (Calif.) hospital. When the doctor asked my why I was there, I tried to tell him that it was perhaps due to my period of captivity,” Fryett says, noting that the doctor had a copy of the newspaper story about his release on his desk. The doctor instead wrote, “This man has a thinking disorder” in Fryett’s medical chart. And for years afterward, the military and VA medical systems treated Fryett as if he was indeed insane. He wasn’t officially recognized as a POW until 1985.

Fond memories Other soldiers regarded overseas duty as an adventure. McCaughey deployed to train South Vietnamese soldiers in early 1960 after persuading the Army to give him the opportunity to see another part of the world. “My expertise was fields of fire,” he says, born of shooting skills he honed on woodchucks while growing up on a farm in Connecticut.

McCaughey sustained shrapnel wounds when another soldier tripped a land mine while on field exercises near the DMZ. He was ultimately shipped to Germany – but not before seeing evidence of the North Vietnamese assassinations of village chiefs and their families loyal to the South Vietnamese government.

“It was not pleasant,” he says. “It looked like their throats were cut or they were partially beheaded.”

Like McCaughey, Lonnie Frampton campaigned for an overseas assignment. He wanted to escape the routine of KP, guard duty and other chores that marked his days stateside. He was sent to Saigon with an ASA radio installation team in 1961. He returned for a second deployment in 1967 with an aviation company that hunted enemy positions with radio direction finders. Frampton loved both tours, but is reluctant to share much about his time in Vietnam.

“I’m still in a quandary about what I can and can’t say,” he says. “The ASA wasn’t supposed to be there, of course. And because of the security clearances, we couldn’t travel to Cuba or other restricted countries for 10 years after we got out.”

Looking back as the 40th anniversary of the fall of Saigon approaches, Frampton has mixed feelings about how the Vietnam War ended. “From what
I read, we didn’t lose a battle. We just lost the country because we pulled out,” he says. “It’s almost like we wasted all that material and sacrifice and lives for what? But if it was under the same circumstances, I’d go again.”

That sense of loyalty and no regret persists among veterans of MAAG, the ASA and other groups that served without recognition in Vietnam.

“I think it grew me up and made me accept people,” says Dean, who was a schoolteacher and principal for more than four decades after leaving the Army. “I think I’m a better person for being involved.”

Save
Tags: Magazine, Heroes to Hometowns