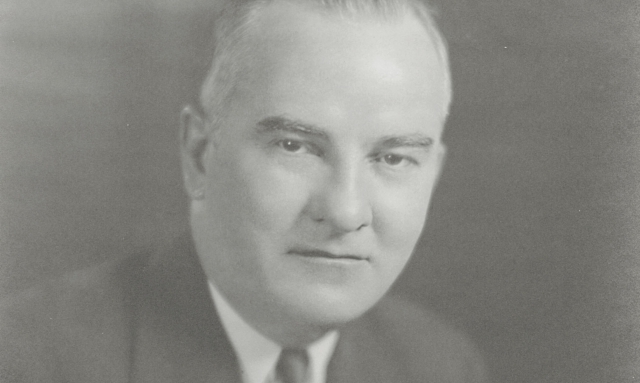 Editor's note: The legacy of Harry Colmery is immortalized June 22 in Topeka, Kan., where a memorial park will be dedicated in his honor and to commemorate the effects of the GI Bill. Click here to learn more.

A 1937 magazine profile of American Legion National Commander Harry W. Colmery contained a prophetic observation: “In the preparation of law cases, his associates say, he is at his best in arranging complicated masses of detail and dovetailing them to fit into a sequence that has, on occasion, flabbergasted opposing counsel by the thoroughness by which it was assembled.”

Six years after the article appeared in The American Legion Monthly, that particular Colmery characteristic was employed in a way that would improve the lives of millions for generations to come, and change the course of
U.S. history.

Colmery was called upon to assemble a collection of legislative priorities into one moral imperative – a GI Bill of Rights – that would strike at the heart of a nation still awaiting the outcome of World War II, at a time when communities across the map were filling fast with men and women who had come home from military service wounded, sick, destitute and psychologically reeling from the effects of their sacrifices.

Congress and the White House were fully aware that the U.S. government was unprepared to handle the delayed costs of war. By the end of 1943, no fewer than 640 separate bills had been introduced to address the needs and problems faced by veterans who had already come home, and of GIs soon to be discharged, at a rate of about 75,000 per month. After all they had done and were doing to free the world from Axis tyranny, little in the way of tangible opportunity awaited them upon their return to civilian lives.

The lack of readjustment services, effective health care or career opportunities for returning veterans soared to the top of the agenda of the nation’s largest veterans service organization that year.

After he was selected by Atherton to serve on a special American Legion committee to help solve the problem, Colmery was asked to put “all the complicated masses of detail” together into one succinct bill and help convince a nation still deep at war on opposite ends of the planet that it needed to invest in its veterans. It would be a tough, controversial and complicated proposition.

Harry Colmery was perfectly suited to take it on.

He had grown up in North Braddock, Pa., the son of a grocery store owner. Smart and athletic, he finished a four-year high school program in two years, excelling in math and English. He was valedictorian of his graduating class and a star athlete who went on to Oberlin College in Ohio, where he started as a shortstop on the varsity baseball team. There, Colmery earned the nickname “Hans” for his play’s resemblance to one of the greatest shortstops ever, Honus “Hans” Wagner of the Pittsburgh Pirates.

While home from college in the summers, Colmery worked at a variety of jobs before he was accepted to law school at the University of Pittsburgh.

After finishing his law degree, Colmery joined a friend in northern Utah, where he was first admitted to the bar and began what became a long and illustrious legal career; he would ultimately argue cases before the Supreme Court and was later selected to represent Robert F. Stroud, the renowned “Birdman of Alcatraz,” in a 1959 motion to vacate a court judgment.

Colmery’s legal career, however, was interrupted soon after it began.

In late 1917, the United States was at war, and Colmery enlisted in the Army Air Service. He was commissioned as a second lieutenant and served as an instructor of infantry drill regulations at Kelly Field in Texas. Two months later, he was promoted to first lieutenant and trained to become a pursuit pilot. A company and squadron commander, he logged more than 500 hours in the air but was never deployed to a combat theater. His experience training pilots in less-than-safe warplanes instilled in Colmery a lifelong passion to fight for adequate peacetime defense readiness, an intractable plank in The American Legion’s platform of values. After the war and his discharge from active duty, Colmery served another decade as a reserve officer, finishing as a captain.

In late 1919, he moved to Topeka, Kan., where his unique mix of intelligence, patriotism, affability, legal skills and commitment to service soon made him a prominent member of the community, in particular The American Legion.

He readily assumed American Legion leadership roles not only at his local post and state department, but at the national level as well. He managed the campaign of Ralph T. O’Neill, also of Topeka, to serve as national commander of The American Legion in 1930 and 1931. As chairman of the Legion’s National Legislative Committee, Colmery pushed Congress to provide loans to World War I veterans against their long-awaited adjusted compensation – or bonuses – as the country sank deeper into the Great Depression. He also marshaled the Rogers Act of 1931, which funded hospital construction and medical services for veterans whose health-care needs were not service-connected, a proposition of more than $20 million in federal investment, not even two years after the stock market had crashed. Like the Servicemen’s Readjustment Act he would later assemble and promote to enactment, the loans and hospital construction measures faced long odds at a time of near bankruptcy for the United States. But, due to Colmery’s determination, they passed.

In Topeka, Colmery was credited for reinvigorating a financially troubled chamber of commerce when he served as its president in the late 1920s. He had similar success as commander for the Department of Kansas. Along the way, he was involved in numerous civic, church, fraternal and community leadership activities.

Colmery’s family – wife Mina and children Sarah, Harry and Mary – were supportive of his active life of service and accepted his travel obligations and time away from home as sacrifices necessary for the good of the nation.

In 1936, Colmery was elected national commander of The American Legion, which he saw as the conscience of a nation whose past, present and future all depend on the values of those who had served in uniform.

“The burden of war falls on the citizen soldier, who has gone forth, overnight, to become the armored hope of humanity,” Colmery said as he was working night and day in 1943 and 1944 to draft what would become known as the greatest social legislation passed in the United States.

And when critics of the GI Bill later suggested that a year of unemployment benefits would turn veterans into slackers, he simply said, “The American Legion has not lost faith in the veterans.”

David Camelon, a Hearst Newspapers correspondent who covered the GI Bill from inception to signing, later wrote of Colmery’s conviction in assembling, writing and promoting the bill: “The American Legion spoke, in a voice of cold, calculated fury that shook America.”

The voice did not come from one. It came from many, a voice unified and amplified by Harry Colmery.

Of all the classes he aced, baseball games he played, cases he won, years he spent in uniform and successes he had in business, nothing would matter more to Colmery’s legacy than the Servicemen’s Readjustment Act of 1944, The American Legion’s crown jewel of 20th-century achievements.

“He was a verifiable legend in our time,” American Legion Past National Commander James F. O’Neil said in 1979. “His name will live forever in the history of The American Legion, the nation and the world.”