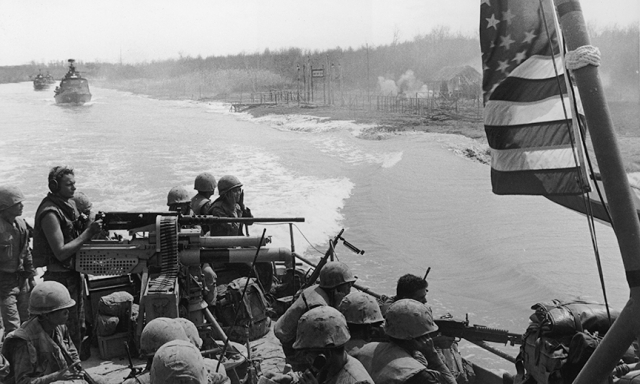 Many years have passed since the last uniformed American came home from the Vietnam War. Those of us who were there often have mixed feelings about our place and time in history. The distance between then and now is sufficient for historians to dissect the war and its many parts from a safe vantage point, from presidential decisions to children left behind, the battles we fought to the quality of our C-rations. Schools barely mention the Vietnam War outside the context of visceral political dissent and demonstrations. As our number begins to diminish, we Vietnam veterans gather in the warmth of our own memories, perhaps surrounded by friends and comrades at an American Legion post, joined by one common thread: the flag under which we fought.

That simply designed rectangular cloth with its universally understood patterns and meanings flew from the moment our troops set foot in Vietnam until the last of our era departed. The flag is a consistent and enduring memory in a war that had little consistency over the decade and a half we endured in Southeast Asia.

Among the millions of American men and women who served in Vietnam, there resides somewhere inside us the knowledge of what it’s like to be far from home and how our memories can bring us back: a sport, a girl, a husband, family, friends, hamburgers, the farm, the city. Images of home rushed privately into our minds whenever we gazed upon the flag in Vietnam.

Our flag meant, and means, something. To us, it symbolized a place we left behind, the spirit of home, temporarily forfeited for a greater purpose and service someplace else. The comfort of a familiar neighborhood, family, friends or a special someone could emerge with emotional clarity after one quick, furtive glance at the flag. It represented what we were, where we were and what we were doing in the world, a comfort we would otherwise not have had. We would never lose our flag. It was us, serving there, and it was them, the people and things we left behind.

Even today, when veterans return to Vietnam, our flag is known to the Vietnamese, most of whom were not yet born when the last of us left their country. A veteran may have a small cloth flag in a book, or a piece of a uniform, or a magazine that shows our flag, and a Vietnamese local will look over his shoulder, see it and say – “Hoa Ky (U.S.), yoi lam (good)” – with a thumbs-up and a big smile. Even after 50 years, our presence and larger purposes there remain respected by many and, in some cases, revered. It is odd to U.S. veterans of this particular war that the former enemy can have more regard for our service than did our fellow citizens when we came home.

Wherever our uniforms went in Vietnam, so did the flag. In some cases, it was large and conspicuous, such as at our embassy or major base camps. In other cases, its presence was much smaller but perhaps more symbolic and meaningful. LZ X-Ray had a small flag by its anthill CP. Small U.S. flags were some of the first visual symbols planted at the top of Hamburger Hill – displayed by soldiers who didn’t want to be there but were anyway and cared deeply about the outcome.

The constantly bombarded Marine bases along the DMZ all flew defiant flags that suffered the same indignities as those that rose over Fort McHenry and Fort Sumpter. Had Lincoln stood in the center of Khe Sanh, he would have seen our flag, smiled and understood. This is why we are here. This is what we are about.

During the Tet Offensive of 1968, small U.S. flags emerged on rooftops and windowsills, advancing the message that the United States was still there, not surrendering. You will have to take us to change this flag. It is ours, and we are keeping it.

In thousands of places and on thousands of things, the flag waved during our war. Whip antennas of vehicles. Stickers on the sides of 500-pound bombs. Colored fragments coursing in the wind behind the Brown Water Navy. At every temporary command post, a maneuver unit might stop for a moment. The U.S. flag, immediately identifiable, represented private thoughts and feelings each of us held. From the early 1950s until the middle 1970s, through the ebbs and flows of enthusiasm and attitude about Southeast Asia and America’s use of military force there, the flag remained the one constant. It would be wherever our uniforms went. It was the same for all of us. It was the flag.

Ordinary people may navigate their lives and locations on the planet in studied ignorance about the evils that surround them. But those who serve and served in uniform know of evil’s existence, its penalties and costs. We intuitively understand that “the only thing necessary for evil to triumph is for good men to do nothing.” Good men and women have carried our flag wherever something had to be done to make the world a better place.

Millions of people who are not U.S. citizens understand what our flag symbolizes, and pay secret homage to its meaning. It transcends culture, religion, education or language to the world’s inhabitants, more so than their own national symbols. It is a flag of hope and aspiration some enjoy only fleetingly.

Since Vietnam, on the shoulder of every service’s uniform, is the flag. It carries a message far larger than the individual who bears it. It always has. It always will. Regardless of personal feelings, those who served under the flag understood that they were for some short time part of something greater than themselves.

They may have been a grunt, a gun bunny, a sailor, pilot or ammo handler, but they were there, and they served the nation and the flag. The several million who served in Southeast Asia, and those whose names are chiseled in black granite, could accurately say, “I served that flag and what it means to us all. It flew proudly because I made it so.”