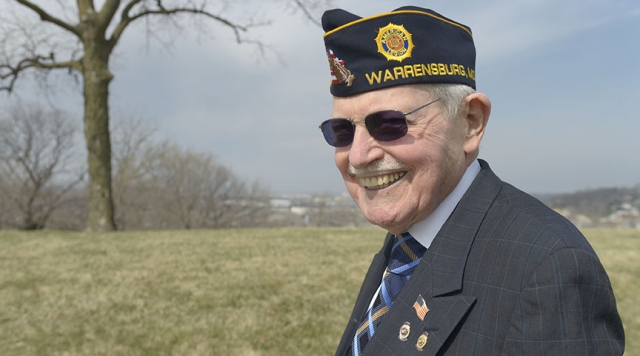 On paper, James Whitfield seems an ideal representative for The American Legion on the nation’s World War One Centennial Commission.

For 70 years, he’s been a member of Matthews-Crawford Post 131 in Warrensburg, Mo. He spent 57 years serving the Missouri Boys State program. During his time as head of the Missouri Veterans Commission, the state established seven veterans homes and a veterans cemetery system. And he’s an honorary lifetime commander of the Missouri American Legion – an honor Whitfield shares with just three others, including President Harry Truman.

More, he’s a longtime supporter of the Liberty Memorial, dedicated in Kansas City in 1926 as a monument to the sacrifices of U.S. servicemembers during the Great War. In December, President Obama signed legislation granting the site national status.

But for Whitfield, his World War One Commission appointment is personal. Veterans of the war were his friends, his mentors, and the guys who told his father that “Jimmy” needed to be part of The American Legion. They were the generation that started it all, and to speak for the organization they founded is “a hell of a responsibility,” Whitfield says.

He recently spoke with The American Legion Magazine about his reverence for the Americans who fought in World War I and the commission’s plans to honor them.

Growing up in the years between the world wars, did you know many veterans?

My father had a dairy, so I became acquainted with a number of World War I veterans because we delivered milk to them. I was enthralled with the idea of how these men had been in France. I remember one talking about his tour around Château-Thierry, where a lot of Missourians were during the war. It wasalways a pleasure to meet and talk with these men. I respected them because they had served our country, and that was important to me, even as a kid.

In the middle of high school, World War II broke out. I enlisted as a senior in 1943, but I promised my parents I would wait until I graduated. I went through boot camp in Farragut, Idaho, and was in the Navy about four years. It was a great tour of duty. I’ve often said that the Navy was very good to me. I just hope I was good to it.

Where did you serve during World War II?

After boot camp, I was assigned to the advance detail of a troop transport: General George O. Squier, named for a World War I general. I ended up being on it 33 months. Because it was a troop-carrying ship, I did get to the States once in a while, but there was always a quick turnaround. When we were scheduled to sail, we sailed on time.

We were in the South Pacific for a few months and took troops into New Guinea and other areas. Then we transferred to the Atlantic for reinforcing troops in Europe. We were also involved in the invasion of southern France. The troops went down the sides on rope ladders to get into the landing crafts. Battleships were on the other side of us, and we could hear their projectiles over our heads going into the beach. That was something.

And when you returned home, you joined The American Legion.

Through the dairy, I got acquainted with A.C. “Gus” Bass, who ended up being state commander of the Legion. When I got out of the Navy, he happened to be president of Citizens Bank in Warrensburg and encouraged me to keep my GI insurance. If I needed a couple hundred bucks, I could go see him. He was instrumental to my early Legion career. In fact, theWorld War I guys elected me post commander when I was in college. They helped me a lot. Whatever success I had, they made it happen. They were genuine people – very patriotic, very community-minded. They were good solid Americans, and they expected me and my generation to be the same.

Describe the World War One Commission and its work thus far.

Our mission is to provide opportunities for Americans to learn about the history of the war and our nation’s involvement, as well as to honor all who served and those who did their part back home in the war effort.

We meet in person once a quarter and are required to meet at least once a year here at the National World War I Museum. Congress charged us with certain things to be done, and that’s what we’re trying to accomplish. We’ve got volunteers and have reached out to each governor, encouraging them to establish some kind of state World War I committee or commission to help disseminate information and educational materials.

For example, they may or may not know how many thousands served from their state. In Missouri, few people know that we had six Medal of Honor recipients from World War I. In fact, there’s a boulevard in St. Louis named after one of them, and I doubt if people in St. Louis know it. So that’s how we’re going to get the word out, through education and various projects that develop locally and get radio, TV and the newspaper in that community talking about something specific. And, of course, we’re on Facebook and Twitter. Social media is probably going to do more for us than anything.

And there are finally plans for a national memorial in Washington, D.C., correct?

The Liberty Memorial here in Kansas City was thought of as the national memorial, but it wasn’t officially that. The American Legion’s Resolution 15, passed by the National Executive Committee in October 2010, called for it. And in the fiscal 2015 defense bill that just passed was a bipartisan amendment renaming this location the National World War I Memorial and Museum.

At the same time, we’re refurbishing Pershing Park in Washington, D.C., so that it will be a national memorial. There will be no more monuments on the Mall, but we’ll have better recognition of World War I in the capital. There was once talk of renaming the District of Columbia War Memorial, but it only recognizes 499 citizens of the district who died in the war. A national memorial will satisfy most everybody. There’s a design competition going on now, and a committee of experts will decide which entry is best, with a final OK from the commission itself in January.

What else is in the works?

We’re cooperating with the American Battle Monuments Commission on plans for an interpretive visitors center at the Argonne in France, with a tentative dedication in November 2016. We’ve also set the date of April 2017 to have some function here at the museum marking the 100th anniversary of the United States entering the war, and hopefully the president will come. Down the road, we’re talking about some kind of parade on the day the troops marched down New York’s Fifth Avenue 100 years ago, and special events for Veterans Day in 2018 and Memorial Day in 1919. A lot of our activity will be cooperating with state and local groups.

How can American Legion posts and departments support the commission?

We hope they’ll take up the banner and do something locally. The Legion has its own centennial committee, so hopefully we will supplement each other. Some posts are named for World War I veterans; they could do some kind of history. They could take a survey of World War I monuments and memorials in their city, their county, and refurbish them. In the process, they’re going to get recognition, which then tells the public that World War I was important.

This is a big opportunity. World War I reshaped the world. World War II was a product of it, and I think our problems in the Middle East and other places today can be traced back to World War I – how things were handled and countries were renamed and realigned. So I think it’s important for the American people to understand that what’s happening today is not just happening today. There’s some history behind it.