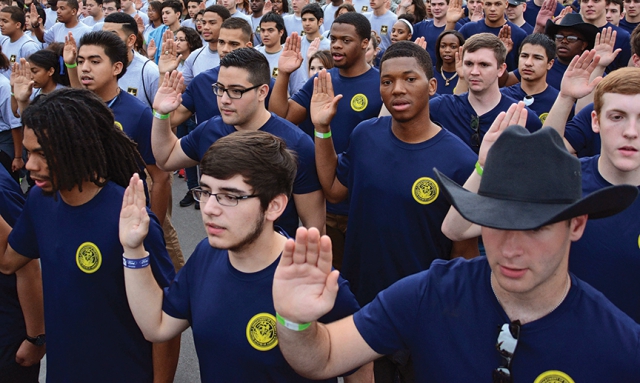 The youngest U.S. troops deployed today to fight the so-called Islamic State in Syria and Iraq were not yet kindergartners when their war began. They were learning to share, use their words, and respect others – especially those different from themselves. Today’s soldiers were at day-care centers trying to color inside the lines, a decade before the first iPad appeared on the market and could do that for them. Our nation’s future protectors would soon put 2 and 2 together and understand the chain of events that began on a sunny September morning in 2001 when Islamic extremists attacked the United States and changed the nature the world we all occupy. As they grew to adulthood, these young people would come to be defined in association to the date of the attacks, members of the most specific generation of Americans since the baby boom: the post-9/11 generation.

“We responded to a national tragedy,” explains Christopher Wilkens, a Marine Corps veteran who fought in the Battle of Fallujah and now serves as commander of American Legion Post 754 in New York City, about five miles from the memorial plaza where the World Trade Center attacks are remembered. “We all volunteered. We volunteered for a decade of war. We had options, and we chose this. Our vision is to show the world what we can do. We can kick ass. We can face anything. That’s our vision going forward.”

Regarded as the longest continuous war in U.S. history, the frontless global confrontation against terrorism continues to pit our nation’s resolve against its budget. The war has fueled patriotism and protest alike. The attacks, and America’s response to them, have topped the agendas of two presidents, seven sessions of Congress, the Pentagon and the Department of Veterans Affairs for nearly a decade and a half. The leaders of both enemy factions – Saddam Hussein and Osama bin Laden – were ultimately hunted down and killed by U.S. troops, but the war continues without the original enemy faces, a hydra that keeps growing new heads. Today the enemy force is led by a former U.S. war prisoner, Abu Bakr al-Baghdadi, whose quest to reclaim hard-won gains in Iraq, Afghanistan and elsewhere has sent America’s fighting men and women back into the thick of harm’s way.

This is the war that launched unmanned aerial drones. It is the war that was fought from control rooms, computers and satellites half a world away. It is a war that has not unleashed U.S. nuclear superiority, as many might have expected or feared, but turned cellphone-detonated roadside bombs into the leading killer of troops. It is the war that more than doubled battlefield survivability, and it is the war that made Facebook and Twitter viable sources for intelligence-gathering.

The war’s critics openly question whether or not it can ever be won. It certainly won’t end with anything like the Armistice of Compiègne or Instrument of Surrender on USS Missouri. President George W. Bush told The American Legion National Convention in 2004, however, that a successful conclusion to the war can be achieved if the United States keeps taking the fight to the enemy. “We meet today at a time of war for our country, a war we did not start, yet one that we will win,” he said. “Make no mistake about it. We are winning, and we will win. We will win by staying on the offensive. We will win by spreading liberty.”

Eleven years after that speech, we continue to fight, having successfully prevented sequels to 9/11 from happening on U.S. soil, an underappreciated accomplishment at a time when nuclear warheads can be stowed in carry-on luggage. As for the spread of liberty, Afghanistan and Iraq have struggled to become independent, free and capable of their own security, while neighboring states have erupted in civil wars and revolutions that leave the region as unstable as ever, the breeding ground for ISIS, and cause for continued U.S. resolve. With or without enough troops, hamstrung by a federal deficit quantified in the hundreds of billions, the post-9/11 generation of U.S. military men and women battles on, envisioning a world free from a scourge that has unnerved the West since Palestinian militants killed 11 members of the Israeli Olympic team in Munich in 1972.

Hit-and-run acts of terrorism and anti-Western violence – from the 1979 hostage crisis in Iran to Hezbollah’s deadly 1983 attack on a U.S. Marine barracks in Beirut, to the first terror strike on New York’s World Trade Center in 1993 that killed six and injured more than 1,000 – began filling newspapers and leading television news broadcasts with jarring regularity as the years rolled by. This was all foreshadowing.

In 1998, Osama bin Laden’s declaration of war against the West, specifically the United States, put a face on the enemy. On May 2, 2011, Navy SEAL Team Six raided the al-Qaida leader’s compound in Pakistan and removed that face from the equation.

“I wish there was not a war, and I wish our young people did not have to fight and die,” said Col. Brett Wyrick, an Air National Guard surgeon, during his deployment to Iraq, as quoted in a publication printed after Resolution 169 was passed by the 87th American Legion National Convention in Honolulu in 2005. “But I cannot wish away evil men … These men are not wayward children who have gone astray. They are not great men who are simply misunderstood. They are cold-blooded killers, and they will kill you, me and everyone we love and hold dear if we do not kill them first.” The 2005 resolution would state for the record The American Legion’s support for the troops and their mission to rid the world of terrorism and terrorist-supporting regimes.

Soon into the war, America’s wounded started coming home. Survivability had so greatly improved by advances in battlefield medicine that VA coined a new term for the kind of long-term care survivors would need: polytrauma. Head injuries, mental health, amputations, burns, blindness and multiple other conditions are treated comprehensively in a network of VA polytrauma centers that also address education, career training and family support. This approach has proven effective and logical, where it can be provided on a timely basis.

Five years of VA health care, regardless of income or disability rating, is offered to post-9/11 veterans in thanks for their sacrifice, but only if they can get in. By 2003, VA was overwhelmed with patient demand; more than 300,000 veterans were waiting 30 days or longer for medical appointments nationwide. VA’s health-care system – already overflowing with veterans of past war eras – was clearly not prepared for the new wave, about a third of whom were suffering from post-traumatic stress disorder, and more than 230,000 of whom had sustained traumatic brain injuries, often as the result of roadside-bomb blasts. PTSD and TBI would become known as the signature wounds of the war. They would also be blamed for high suicide rates.

On March 31, 2011, a 28-year-old former combat Marine named Clay Hunt took his own life after months of battling PTSD, frustrated over treatment and prescription delays at VA. “He told me, ‘It’s like a bad movie on rewind,’” said Hunt’s mother, Susan Selke. “‘It plays, it rewinds, plays, rewinds.’ The medications he took didn’t help.” Five weeks after his suicide, VA informed the family that Hunt’s service-connected disability rating had increased from 30 percent to 100 percent.

Greater attention to PTSD, TBI and military sexual trauma continues to evolve as the post-9/11 generation transitions back to civilian life. Mental health is just one concern among the many needs today’s veterans face in the readjustment process. Education, career training, benefits assistance, personal finance and basic camaraderie with those who understand them are layered into the strata of the post-9/11 veteran who, unlike those who served in previous major war eras, represents less than 1 percent of the total U.S. population.

Out of this war came the Post-9/11 GI Bill, a long-overdue update to one of The American Legion’s greatest accomplishments, the Servicemen’s Readjustment Act of 1944 that educated millions and fueled a half-century of economic prosperity. Speaking at the 2011 American Legion National Convention in Minneapolis, President Obama said the newest generation of veterans could do as those of the past did for the slumping U.S. economy. “After a decade of war, it’s time to focus on nation building here at home,” Obama said. “And our veterans, especially our 9/11-
generation veterans, have the skills and the dedication to help lead the way.”

The motto retired Army Staff Sgt. Travis Mills posts on his website is simple: “Never give up. Never quit.”

Mills lost both arms and both legs in a roadside bomb attack in Afghanistan in 2012. It was his third combat deployment. One of only five post-9/11 veterans who are quadruple amputees among nearly 1,600 who have lost limbs in the war, he has since dedicated his life to inspiring others and helping his fellow wounded warriors make the transition. In March 2015, his foundation purchased a lodge and property in Maine that he is turning into a retreat for disabled veterans and their families. “I’m fortunate,” Mills told the Bangor Daily News in 2013. “I’ve got a 21-month-old daughter, and I’ve got a beautiful wife who loves me and is by my side. I still have the opportunity to have more children and live a good life.”

Dawn Halfaker was a military police captain serving in Iraq when a rocket-propelled grenade took her right arm. The former Army basketball player and current member of The American Legion Small Business Task Force is the founder and CEO of Halfaker & Associates, a successful Washington-based firm that provides high-tech communications and cybersecurity systems for the federal government, including U.S. military branches and the Department of Homeland Security. “I would not say I am naturally an entrepreneur,” Halfaker told The American Legion Magazine in 2008. “I’d say I am naturally someone who just wants to carry on and endure.”

And, like many of her fellow post-9/11-generation vetrepreneurs, she is committed to hiring others who fought for their country. “Specifically, we are hiring wounded veterans,” she said. “That’s a mission very near and dear to my heart.” In May 2015, Inc. magazine recognized her and her company, which now employs more than 130 people with annual revenues of approximately $25 million, as one of the five top veteran-owned companies in the nation.

Obama described them this way to the Legion in Minneapolis: “A generation of innovators, they’ve changed the way America fights and wins its wars. Raised in the age of the Internet, they’ve harnessed new technologies on the battlefield. They’ve learned the cultures, traditions and languages of the places they’ve served. Trained to fight, they’ve taken on the role of diplomats, mayors and development experts, negotiating with tribal sheikhs, working with village shuras and partnering with communities. Young captains, sergeants and lieutenants have assumed responsibilities once reserved for more senior commanders, reminding us that in an era when so many other institutions have shirked their obligations, the men and women of the United States military welcome responsibility. Never before has our nation asked so much of our all-volunteer force – that 1 percent of Americans who wears the uniform.”

This is the first in an American Legion Magazine series that will explore, in the words of that 1 percent, what this longest U.S. war has meant to them and the common bond they share with all who have served in the U.S. Armed Forces.

Save
Tags: Heroes to Hometowns, Honor & Remembrance, Our Pillars Your Platform, Troop Support