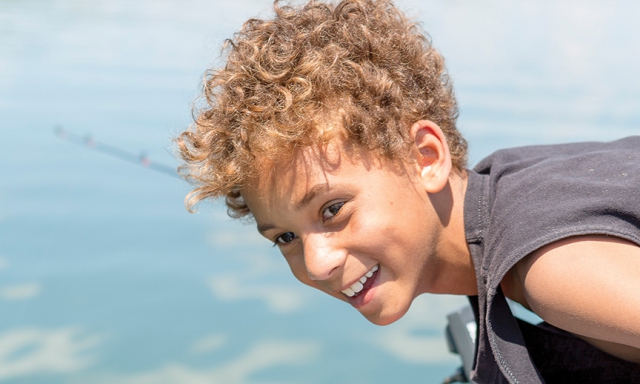 Although Ray Dula is not a big fan of fishing (“easier to just get fish at the Publix”), she was eager to take her kids angling in May to remember her husband as he had been years earlier.

Reclining in the back of a boat, enjoying the sunshine, Dula says she just wanted to show her children a bit more about who their father was and what he enjoyed. “He’s not with us (anymore), but I kind of wanted them to see what his legacy is, what it would have been if he was still with us,” she says. “He loved to fish.”

She turns to the four kids, jokingly warning them, “You catch some fish or you’re all grounded!”

Returning to the subject of her late husband, Ebbin, she continues describing him. “He just loved the outdoors – the wilderness, fishing, camping – and that’s not something I particularly care for. But I feel like it’s my obligation as the mother of his children, and the only parent left for my kids, to bring as much of the things that he liked into our everyday life.”

This particular outing was part of “Fishing For Freedom,” an annual event coordinated by The American Legion Department of Georgia’s 5th District. Across the country, departments, districts and posts sponsor activities such as this one to connect and support the generation that served in the post-9/11 era. Dula was one of more than 300 veterans attending this year’s event just outside Carrollton, Ga.

“We support disabled veterans, Gold Star Mothers and families, and any injured veteran, and we give them an opportunity to fish and relax with their family,” says Eddie Asberry, the 5th District’s commander. “We get veterans from all over the state and surrounding states. We furnish them rods and reels and tackle boxes, and we feed them breakfast and lunch, and then they are off to fishing.”

Dula’s four children – Royce, 9, twins Eyan and Emmarie, 5, and Erianna, 4 – entertain themselves playing with a bucket of fish. Unfortunately, it’s the bucket with the bait fish, as they show little patience in letting bigger fish get to the hook before trying to reel them in. Erianna especially enjoys pouring a small container of worms directly into the bucket of minnows. “Maybe they can be friends,” she says.

Meanwhile, Dula is thinking about how the military prepared her for parenthood. “When you have soldiers, your job is to in some ways parent them and mold them into future NCOs and officers,” she says. “With my kids, I’m just molding them into future ladies and gentlemen.”

“I was used to that way of life already,” Dula says. “That’s why when it was time to either go to college or join the Army, the military seemed the most natural thing for me to do. It’s all I’ve ever known.

“Although I came from a family with deep military investment, I was very immature when I joined and didn’t really grasp its significance until after I was discharged,” she continues. “I was an ‘if the rule wasn’t going to break, I’m gonna bend it’ kind of child. Not mature enough to go to college and appreciate my parents’ sacrifice and not blow their money, I needed an atmosphere that would not only allow me the space to grow up but provide consequences for my actions, whether they be good or bad.”

So Dula enlisted in the Army as a military police officer, in the footsteps of her paternal grandfather. After basic training at Fort Leonard Wood, Mo., and a stint in Korea, she was assigned duty at Fort McPherson in Georgia, where she met fellow MP Ebbin Dula.

“We met while stationed at Fort McPherson, and wouldn’t you know, we didn’t like each other at all,” Dula recalls. “But I really admired his work ethic and his many accomplishments in just a short period in the Army. I wanted to get promoted to sergeant and really turn my career around, and so I went to him for help. Not only did I make E-5, but I had fallen in love. He pinned me when I got promoted to sergeant.”

The Dulas were honorably discharged from the military in 2005, and their first child, Royce, was born Aug. 7 that year. They married a few weeks later. “Just me, Ebbin and our new baby,” she says. “Four years later we were pregnant with Eyan and Emmarie, who were born four months prematurely and spent most of their early lives in and out of the hospital, and then just 13 months later Erianna ‘Bear’ was born.”

Ebbin got hired as a federal police officer, and re-enrolled at Saint Leo University in Florida to pursue a criminal justice degree. To his wife, everything seemed to be going well, but Ebbin was plagued by inner demons. Unfortunately, the couple separated, and after April 28, 2013, there would be no reconciliation.

“The night I lost my husband will forever be etched in my mind,” Dula says. “I was on the phone with him when he shot himself. He threatened to shoot himself an hour or so before he actually did it. I notified the police. Being a federal police officer, he knew exactly what to say to them. They left. While on the phone with me for the second time, he was constantly moving. Then it just happened. I knew what it was when it happened but I didn’t want to believe it. I got confirmation two hours later. The aftermath was brutal, a pain that I never knew existed. My heart literally broke, and I felt it in every way imaginable.”

Dula had lost her husband and best friend. Now alone, with the exception of family who lived hundreds of miles away in Virginia, she focused on taking care of their four children and maintaining what she could of her family’s life.

“Initially I was hanging on for dear life,” she says. “It was a struggle for me to do the simplest of things. People would tell me to take it one day at a time, and I would say, ‘No, I’m taking it one second at a time, because that’s all I can handle.’

“As time passed, I found I was stronger than I was the day before. I was able to handle more, and the feeling of accomplishment made me grateful for my life, my kids and having the power to turn something negative into something positive.”

Dula says that her survival depended on the small victories. “Whatever step you make toward healing, whether it be small or big, is enough,” she says. “There’s nothing to prove. It’s an uphill battle, and you choose your pace and the distance to climb or even crawl. People who want to offer their advice or opinion, but they’ve never been in a situation remotely close to yours. Those are the people you steer clear of.”

Dula has not just survived, but thrived. She has the support of her family, and a good job as a customer service representative for an insurance company. She says she refuses to let the loss of her husband define her. Instead, she wants her recovery and the bright future of her children do that for her.

“Yes, it hurts talking about my husband’s death, but if my hurting can heal others ... mission accomplished,” she says.

As for Fishing for Freedom, the Georgia Legion’s 5th District is proud to organize it. “We want to show our appreciation for those who have suffered in some way,” says Rick Cowan, program director. While Dula and her children have indeed suffered, they are grateful to have had the opportunity to spend a day together, and with other veterans.

Mark Seavey is new media manager for The American Legion.