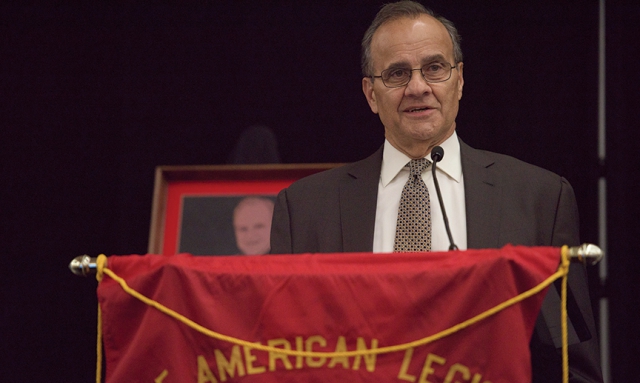 Joe Torre was in what he calls “the back nine” on the golf course of life. After an outstanding career playing Major League Baseball – which included a National League Most Valuable Player Award and playing or managing more than 4,200 games with three different franchises – he had never been to a World Series.

Then George Steinbrenner, the demanding and colorful owner of the New York Yankees, called with an opportunity. Suddenly, at 56, Torre finally made it to the World Series in 1996. It led to the first of four world championships to which he’d guide the team over the next five seasons.

Originally dubbed “clueless Joe” by a New York tabloid when he arrived in the Big Apple, Torre ended up in the Baseball Hall of Fame and was immortalized with a plaque at Yankee Stadium. The team also retired his uniform number, 6, after his tenure there, which included postseason appearances in every one of his 12 seasons with the Yankees. He went on to a successful managerial stint with the Los Angeles Dodgers and currently serves as chief baseball officer for Major League Baseball.

All this aside, it was Torre’s Safe at Home Foundation, a charity dedicated to fighting domestic violence, that led The American Legion Past Department Commanders’ Club (PDCC) to select him as this year’s James V. Day “Good Guy” Award winner.

While presenting Torre with the honor at a luncheon Aug. 31 in Baltimore, Past National Commander John P. “Jake” Comer joked, “You know, Joe, my cap says Massachusetts, and I am a lifelong Boston Red Sox fan. It’s a testimony to your class and character that you were still selected for this award. But in all seriousness, it is well deserved.” Comer also presented Torre with a $2,000 donation to Safe at Home on behalf of the PDCC.

Did you play American Legion Baseball?

I did. I played so much baseball as a kid. Our team, the Brooklyn Cadets, we were in so many different leagues in an effort to play a lot of baseball.

How important is Legion ball to a player’s development?

To me, it’s important because it teaches you some of life’s lessons. Playing the game is one thing. But what you get out of it and what you put into it are so much more important. The game is the game and I know it’s been my life. But it’s what you learn from it. Basically it’s a game of life. I’m a little concerned about where we’re going today with (the attitude of) ‘Look at me, here I am.’ To go through life thinking that you are the most important guy in the room is dangerous. Getting anything done, really, you need somebody to help. And I’ve always been one to talk about teamwork, because it’s so much more satisfying when you have a number of different people pulling in the same direction to accomplish something special. I was very fortunate to inherit a very special group of guys with the Yankees.

You managed the 1998 Yankees, who won 114 regular season games. Would you say that was the greatest team ever?

You know, the first week of the season it didn’t look that way. But it would really be tough to look at a team that was better. It’s tough to compare generations. Winning 114 during the season and going 11-1 in the postseason is pretty amazing.

Tell me about your military experience.

I was in the Air National Guard.  It was a very tense time; I was in basic training during the Cuban crisis in 1962. I had already been in the big leagues for two years, and we were laying in bed listening to those planes take off from Kelly Air Force Base. It was, “Wow.” And, of course, needless to say, my drill instructors were saying I’d be playing in Havana next year. They always liked to stick a knife in you. It was a scary time. I think we all know that. Of course, we didn’t know how scary it was until you got the news accounts after the fact. We were certainly alert to the fact that we were close to something that wasn’t good.

Why did you create the Safe at Home Foundation?

I was a shy kid. Not a lot of self-esteem as a youngster. Didn’t even go out for my high school baseball team as a freshman. I didn’t have confidence in myself. I don’t know, I thought I was born that way. Fast-forward to 1995: my wife was eight months pregnant with our daughter. I was between jobs at the time. I was in Cincinnati, I had been fired by the Cardinals, and she said, “Can you come to this self-help seminar with me?” I said, “Sure.” I mean, she’s eight months pregnant, I’m not going to say no. And I had no clue what to expect. It’s called Life Success (and) it still exists today ... I remember standing in front of perfect strangers, crying my eyes out, because they were talking about something that let me know what was going on in my house: my dad abusing my mom, which as a youngster growing up I knew was taking place.

I never saw him physically abuse her, but I saw the results; he was a New York City cop, so I was in the room as an 8- or 9-year-old when he went for his revolver to threaten her. All of that stuff that had an impact on me. So once I went to New York with the Yankees, my wife said, “What charity do you want to get involved with?” It usually involves children. I said, “How about domestic violence?”

It caught her off guard a little bit, because I didn’t talk about it. But going forward, we started our Safe at Home Foundation and based it on education. It was my older daughter, Cristina, and my wife ... if we’re going to end the cycle of domestic violence, you’re going to have to educate people. We put safe rooms in schools – named after my mom, we call them Margaret’s Place – with master’s-level counselors. We are in eight schools in the New York area, and we have four programs in Los Angeles. We work with the Boys Club and Girls Club there also, and we’ve had close to 50,000 kids come through our schools. Though there is always more work to be done, we are having an impact.

Go online to read more about Joe Torre and the Safe at Home Foundation: www.joetorre.org