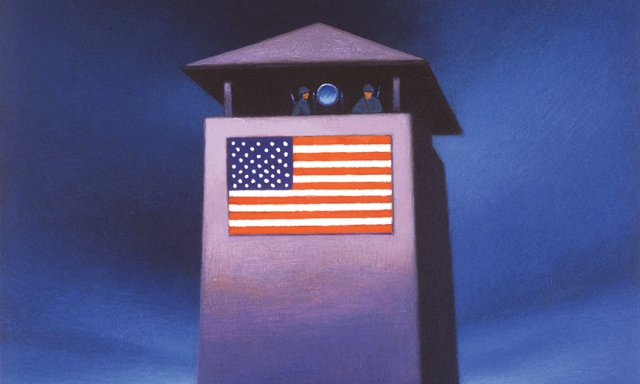 In 2011, in one of his last addresses as defense secretary, Robert Gates worried that the White House and Congress were contemplating changes to America’s national-security posture without taking into account the long-term implications.

“If we are going to reduce the resources and the size of the U.S. military,” he warned, “people need to make conscious choices about what the implications are for the security of the country ... The tough choices ahead are really about the kind of role the American people – accustomed to unquestioned military dominance for the past two decades – want their country to play in the world.”

Four years later, the consequences of a United States with fewer military resources and a smaller role in the world are coming into focus. The resulting picture is forcing Americans, though weighed down by the costs of engagement, to consider the costs of disengagement.

Reflecting the national mood, President Barack Obama has said, “It is time to focus on nation-building here at home.” Interestingly, at the other end of Pennsylvania Avenue – and the other end of the political spectrum – Sen. Rand Paul, R-Ky., has a similar view. “Let’s quit building bridges in foreign countries and use that money to build some bridges here at home,” he declares, calling for “a foreign policy that is reluctant,” with “less soldiers stationed overseas and less bases.”

This turn inward, this drift toward disengagement, is a natural reaction to a period of costly global engagement. Since 9/11, the U.S. military has engaged in significant combat operations and/or sustained new deployments in Afghanistan, Iraq, Libya, Pakistan, the Philippines, Somalia, Djibouti, West Africa, Eastern Europe, Syria and Yemen. Afghanistan and Iraq alone have claimed 6,846 American lives and devoured $1.64 trillion.

However, history reminds us that there are also costs to disengagement.

When the Great War began, President Woodrow Wilson pledged to be “neutral in fact as well as in name.” Germany responded with unrestricted submarine warfare and a secret plan to lure Mexico into an alliance of treachery. Neutrality and nonengagement had nearly led to catastrophe.

After the war, the American people retreated from the responsibilities of global leadership for a generation, disengaged from Europe and stayed out of the world’s way. Then Chamberlain gave us Munich, Hitler gave us another European war, and Japan gave us Pearl Harbor. Disengagement proved catastrophic.

After the Pearl Harbor attack, President Franklin Roosevelt steered the United States into an era of unprecedented global engagement. He scolded “those Americans who believed that we could live under the illusion of isolationism” and who “wanted the American eagle to imitate the tactics of the ostrich.”

But the nation’s transformation from hermit republic to global power was anything but smooth or certain. In October 1945 – just two months after the Missouri steamed into Tokyo Bay – Gen. George Marshall decried the “disintegration not only of the armed forces, but apparently ... all conception of world responsibility,” warily asking, “Are we already, at this early date, inviting that same international disrespect that prevailed before this war?”

Stalin would answer Marshall’s question, gobbling up half of Europe, blockading Berlin and arming Kim Il Sung in preparation for his invasion of South Korea.

The U.S. military had taken up positions in Korea in 1945, but withdrew all combat forces in 1949. Then, in 1950, Secretary of State Dean Acheson announced that Japan, Alaska and the Philippines fell within America’s “defensive perimeter.” Korea didn’t. Stalin noticed.

“So far as the military security in other areas of the Pacific is concerned,” Acheson explained at the time, “no person can guarantee these areas against military attack.”

In fact, the United States would guarantee Korea against military attack – at a cost of 38,000 American lives, 103,250 South Korean troops and 2 million civilian casualties. Again, disengagement proved catastrophic, which is why U.S. troops remain in Korea to this day.

After Vietnam, Washington pulled back, cut back and pursued detente with Moscow in hopes of lessening Cold War tensions. Moscow responded by building up its military and growing more aggressive, not more accommodating. In addition, it expanded its global footprint in Central America, Africa and Afghanistan.

FROM COLD WAR TO HOT WAR Washington’s interest in Afghanistan declined dramatically after the Red Army was defeated by U.S.-backed fighters. “As soon as the Soviets left Afghanistan, we turned our backs on Afghanistan,” Gates recalls. Then the Taliban gave Osama bin Laden a base of operations inside Afghanistan, and bin Laden gave us 9/11, inexorably drawing the United States back in. Yet again, disengagement carried heavy costs.

With America filing toward the exit, some observers worry about history repeating itself. “We have no realistic way to deal with threats in this region without bases in eastern Afghanistan,” retired Gen. David Petraeus recently warned.

Recognizing that Americans had grown not only war-weary but increasingly world-weary, Obama made good on his pledge to withdraw U.S. troops from Iraq in 2011, declared that “core al-Qaida” was “on the path to defeat” in 2013, and invited the nation “to turn the page on more than a decade in which so much of our foreign policy was focused on the wars in Afghanistan and Iraq” in 2014.

By every metric, post-surge Iraq was in better shape than pre-surge Iraq, and the consensus among military commanders was that Iraq needed the U.S. military’s support to sustain the upward trajectory of the surge. Even so, the disengagers viewed U.S. involvement in Iraq as a problem to be corrected rather than a commitment to be sustained. As former Defense Secretary Leon Panetta laments in his memoir “Worthy Fights,” the Obama White House was “so eager to rid itself of Iraq that it was willing to withdraw rather than lock in arrangements that would preserve our influence and interests.”

The consequences of disengagement were predictable: without the steadying hand of the U.S. military, the Maliki government abused its power; sectarian tensions exploded; the window of opportunity for Iranian mischief widened; al-Qaida in Iraq reconstituted and rebranded itself as the Islamic State (aka ISIS); Baghdad was nearly overrun; Yazidis, Shiites and Christians were massacred; and ISIS declared a jihadist caliphate in the heart of the Middle East. Only Obama’s 11th-hour decision to reverse course and redeploy U.S. forces back into Iraq prevented the country from disintegrating, which would have been a catastrophe within a catastrophe.

As for turning the page on a decade of war and defeating core al-Qaida, it seems the Obama administration misread the takedown of bin Laden as a strategic victory rather than a tactical success. Put another way, if the Bush administration’s global war on terror was too broad, the Obama administration’s war on core al-Qaida proved too limited. As a RAND study concludes, “Using the state of core al-Qaida ... as a gauge of the movement’s strengths (or weaknesses) is increasingly anachronistic” given that “Salafi-jihadist groups ... have started to resurge in North Africa and the Middle East.” For example:

BURDENS AND BOOTS Doubtless, disengagers would cite the above list to argue against getting involved in foreign problems in the first place – and to argue for a return to the days when America kept to itself. But the notion that the United States lived, once upon a time, in blissful isolation is more fiction than fact. True, when the United States was young and weak, President George Washington plotted a path of studied nonintervention. But as a trading nation, a maritime nation, a mission-oriented nation, America was destined to be engaged in the world.

A mere four years after Washington left office, President Thomas Jefferson launched a war against piracy halfway around the world, setting the stage for what was to come. Of the 340-plus “notable deployments of U.S. military forces overseas” tallied by the Congressional Research Service, 135 occurred before U.S. entry into World War I. In this light, America’s isolationism during the interwar years looks like an aberration.

The underlying premise of the American people’s increasingly standoff approach to the world seems to be that U.S. intervention causes more problems than it solves. But far from being part of the problem, U.S. boots on the ground are often part of the solution. U.S. troops have been in Germany and Japan since 1945, South Korea since 1950, Kuwait since 1991 and Kosovo since 1999. The common denominator of this diverse group is that each is peaceful, friendly and stable.

Today, 25 years after rushing to the region to shield Saudi Arabia from Saddam Hussein, U.S. troops are back in Iraq – defending U.S. interests and allies, fighting jihadists, buttressing a fragile government and providing some semblance of stability amid the chaos. Such is the burden of being a superpower with a conscience.

CHAOS AND CONFLICT While engagement carries costs – sometimes great costs – it can yield great returns. U.S. engagement pushed the nation’s borders to the Pacific in the 1800s, elevated America’s global position in the early 1900s, turned the tide during World War I, prevented a return to the Dark Ages during World War II, refashioned Japan and Germany into liberal democracies during the postwar peace, preserved free governments and free markets during the Cold War, transformed Europe from an incubator of world wars into a partnership of peace and prosperity, and for 70-plus years has prevented a return to the great-power wars so commonplace between 1745 and 1945.

“The era of American predominance,” as Robert Kagan of the Brookings Institution concludes, “has shown that there is no better recipe for great-power peace than certainty about who holds the upper hand.” But thanks to a confluence of factors – Washington’s drift toward disengagement, sequestration’s erosion of the armed forces, the public’s world-weariness – the United States is dealing away that upper hand. The defense budget has fallen from 4.7 percent of GDP in 2009 to 3.2 percent today. If current projections hold, it will be just 2.8 percent of GDP by 2018-2019.

The last time the United States invested so little on defense was, ominously, 1940. This is the best way to invite the very worst of possibilities, what Churchill called “temptations to a trial of strength.” These once-avoidable trials of strength are proliferating with Moscow in Eastern Europe and Syria, with Beijing in the South China Sea and with Tehran in the Persian Gulf.

No matter what the disengagers say, America’s historic role and current position on the world stage give it a special responsibility to sustain the liberal global order forged after World War II – an order that benefits America more than any other nation. The alternative path – the retreat of U.S. power – leads to the spread of chaos and conflict.

Just look at today’s headlines. As Washington focuses on nation-building at home and allows sequestration to whittle away at the big stick, China’s military spending has grown 170 percent the past decade, giving it the confidence and capability to challenge the United States’ once-unquestioned primacy in the Pacific. Russia, in the midst of a 108-percent increase in military spending, is reversing the settled outcomes of the Cold War. Iran is emerging as a regional hegemon. Syria has reopened the Pandora’s box of chemical weapons. ISIS is erasing international borders and threatening U.S. allies in Turkey, Jordan, Israel and Saudi Arabia.

The post-World War II order built by the United States did not emerge by accident and does not endure by magic. It presupposes U.S. engagement and “requires positive, active effort and sacrifice,” as Marshall explained in 1945. “Above all, it is a continuing process.”

Alan W. Dowd is a contributing editor of The American Legion Magazine and a senior fellow with the Sagamore Institute Center for America’s Purpose.