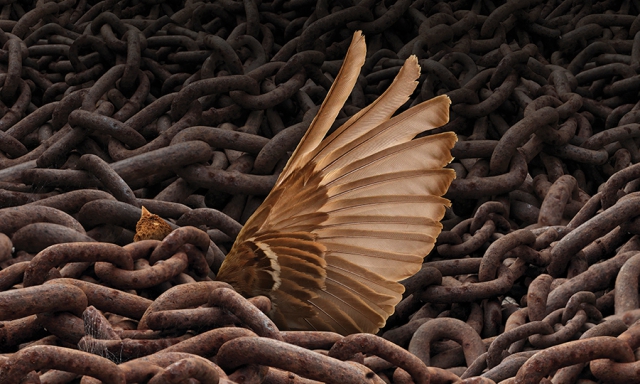 Eleven months before the attack on Pearl Harbor, President Franklin D. Roosevelt shared his vision of a world founded upon four essential human freedoms: freedom of speech, freedom from fear, freedom from want and “freedom of every person to worship God in his own way – everywhere in the world.”

Importantly, Roosevelt asserted those four freedoms in the context of a speech about “the democratic way of life ... being directly assailed in every part of the world” by a “new order of tyranny.” In short, he understood that religious liberty is the proverbial canary in the coal mine of a society’s health. It doesn’t tell us everything about a government or group, but it tells us enough.

Whether they’re mass murderers masquerading as holy men in Nigeria or Syria, atheist dictators in Pyongyang or Beijing, theocrats in Tehran or autocrats in Moscow, regimes and movements that rationalize the stifling of religious liberty inside their borders are more likely to rationalize unacceptable behavior beyond their borders – and more likely to threaten U.S. interests.

ROOSEVELT SPOKE during the high noon of godless tyrannies – or, more accurately, tyrannies that elevated their leaders to godlike status.

Some observers contend, wrongly, that Adolf Hitler and the Nazis hijacked Christianity and used it to validate the Nazi program. The truth is that Hitler’s Nazis embraced a pagan religion of mysticism, racialism and social Darwinism.

The Nazi Party platform called for religion to be subordinated to the state and to “the manners and moral sentiments of the Germanic race.”

“The destruction of Christianity was explicitly recognized as a purpose of the National Socialist movement,” Nazi leader Baldur von Schirach explained.

Historian Gerhard Weinberg argues that Christianity and Judaism “were removed simultaneously” by the Nazis.

In 1938, Hitler’s SS destroyed 300 synagogues and arrested 25,000 Jews. A year later, he began to deport Germany’s Jewish population to Eastern Europe, where his war on religion would crescendo. By the end of the war, Hitler had murdered 6 million Jews.

Likewise, the Nazi regime desired “a complete extirpation of Christianity,” as the U.S. government concluded after combing through Nazi records, but “considerations of expediency made it impossible” to do so in one fell swoop. So Hitler employed a policy of gradualism: lying to church leaders about the Nazi program and then lying about church leaders to the German people, abrogating laws protecting religious independence, seizing control of church institutions, shuttering religious schools and seminaries, declaring certain denominations illegal, fomenting violence against church leaders, sending anti-Nazi church leaders to concentration camps and murdering others.

Imperial Japan elevated its emperor to a god status, making it easier for his high command to justify anything and everything.

In the interwar years, Japanese authorities began reversing liberal policies on religious activity. By the late 1930s, as Princeton University’s Sheldon Garon details, the regime was regulating religious activity, ordering religious groups to correct “discrepancies between their teachings and the imperial myth,” and subordinating all faiths to the cult of the emperor.

As Paul Johnson adds in his history of the 20th century, “Modern Times,” Japan’s imperial masters turned Shinto into a state religion that encompassed emperor worship in the military and in schools. Shinto was thus transformed into “an endorsement of a modern, totalitarian state,” and “religion, which should have served to resist the secular horrors of the age, was used to sanctify them.”

The Soviet Union – an enemy-of-my-enemy ally during the war – rejected religion altogether, purged those who refused to genuflect to the state and elevated government above all else. Vladimir Lenin, founding father of the Soviet Union, viewed religion as “a powerful and ubiquitous enemy,” Johnson writes.

Virtually the entire clergy corps of the Russian Orthodox Church was liquidated or sent to labor camps in the 1920s and 1930s. “By 1939 only about 500 of over 50,000 churches remained open,” the Library of Congress reports.

Although Josef Stalin, in the grimmest days of World War II, permitted the practice of religion to rally the Russian people, it was a self-serving – and short-lived – response to an existential threat. As evidence, in 1953, Stalin ordered more than a million Soviet Jews deported to Siberia. They were spared only by his death.

UNIVERSITY OF TEXAS PROFESSOR WILLIAM INBODEN notes that “every major war the United States has fought over the past 70 years has been against an enemy that also severely violated religious freedom.” He sees a clear “correlation between religious persecution and national-security threats.” Indeed, today’s worst violators of religious liberty represent the most serious threats to U.S. interests.

Recognizing the “many parallels” between North Korea and Nazi Germany, panel chairman Michael Kirby concedes, “I never thought that in my lifetime it would be part of my duty to bring revelations of a similar kind.”

Consider what’s happening in Wenzhou, a city in eastern China “known for its relaxed ties between church and state,” The New York Times reports. Too relaxed, it turns out. Xia Baolong, a regional Communist Party leader, saw a massive spire atop a new church and ordered government authorities to bulldoze the entire place of worship. A dozen other churches in the region were then forced to remove their crosses or face demolition. Importantly, Xia is a close ally of Xi Jinping, China’s president.

Or consider the story of Bishop Cosma Shi Enxiang, who recently died after 60 years in prison. His crime: refusing to renounce his allegiance to the Vatican – and refusing to bow to Beijing’s illegitimate form of Catholicism.

According to a 2015 Freedom House report, “hundreds of thousands” of religious adherents – many of them guilty of “simply possessing spiritual texts in the privacy of their homes” – were sentenced to labor camps or prison.

According to the State Department, Beijing prohibits teachers and civil servants from worshipping at mosques, fines individuals “for studying the Quran in unauthorized sessions” and positions the Chinese flag on mosque walls “in the direction of Mecca so prayers would be directed toward them.”

Considered “illegal networks” and “Zionist propaganda institutions” by Tehran, house churches are regularly raided. According to USCIRF, “Christians, particularly evangelicals and other Protestants, are subject to harassment, arrests, close surveillance and imprisonment.”

INBODEN’S CORRELATION between religious persecution and national security is striking. The unsavory regimes noted previously, along with the transnational movements detailed ahead, represent some of the Pentagon’s gravest worries.

To be sure, both Saudi Arabia and Pakistan are technically, nominally, allies. But it pays to recall that Saudi Arabia is “the most significant source of funding to Sunni terrorist groups worldwide,” according to State Department cables. For years, Osama bin Laden hid in plain sight in Pakistan. Also, Pakistan’s intelligence agency midwifed the Taliban, which made common cause with al-Qaida.

Beyond the boundaries of any regime, transnational groups target faith freedom.

The Afghan Taliban, for instance, ordered Hindus to wear special identity labels, destroyed ancient statues of Buddha, executed those belonging to opposing sects of Islam, considered evangelism a “severe crime” and imprisoned foreigners who talked about Christianity. The Pakistani Taliban has targeted Christian churches. A 2001 attack killed 15, a 2002 attack killed five and wounded 45, and a 2013 bombing killed 81.

In short, no one should have been surprised when the Taliban allowed bin Laden to use Afghanistan as a launching pad for his war against civilization. The terrorist attacks of Sept. 11, 2001, were the natural endpoint for such a monstrous movement – or perhaps we should say “midpoint.” After all, the Islamic State has pushed the jihadist war on civilization to new lows.

ISIS (whose adherents are Sunni Muslim) has summarily executed hundreds of Shiite Muslims in Iraq, set fire to “apostate” homes across Syria and Iraq, executed independent imams and Yazidis, subjected Yazidi women to “systematic rape and sex slavery,” according to the Kurdish government, and orchestrated mass beheadings of Egyptian Christians. ISIS has given Christians a choice to convert to Islam, pay extortion to remain Christian or face execution. And in its self-styled capital of Raqqa, Syria, it has installed sharia law, complete with public executions in the town square.

This is the enemy the United States has been fighting – not by proxy but at close range – for 14 years. But America is not at war with Islam. In the past quarter-century, U.S. forces have rescued Muslims in Kosovo and Kurdistan, Somalia and Sumatra, Kuwait and Kabul. However, the United States is at war with those who would force people to submit to Islam or any other faith. Now, as in Roosevelt’s day, Americans long for a world where neither government dominates religion (like the People’s Republic of China) nor religion dominates government (like the Islamic State or the Islamic Republic of Iran).

THERE’S A PARADOX at work here. Regimes that have no respect for religion naturally see no limits on their power and no moral constraints on what they do. Since they believe nothing is above the state, they can rationalize everything they do in the name of the state or the fatherland or the revolution. Consider Hitler, Stalin, Mao and the Kim dynasty. Yet regimes and groups at the opposite end of the spectrum – those that see themselves as exponents of a religion and instruments of their god – end up at the very same destination. Since they believe they are acting on behalf of their god, and since nothing is above their god, they can rationalize everything they do in the name of their god. Consider ISIS and al-Qaida, Hezbollah and Iran.

As President Ronald Reagan once said, “It is difficult to imagine that a government that continues to repress freedom in its own country, breaking faith with its own people, can be trusted to keep agreements with others.”

Put another way, now is not the time to cut deals with Tehran, take Putin at his word, avert our gaze from the latter-day gulags in North Korea and China, or breezily conclude that we’re “turning the page on a decade of war” – especially given that the enemy in this war is still viciously fighting and still violently opposed to religious pluralism.

Instead, leading policymakers should draw attention – relentlessly and repeatedly – to assaults on religious liberty. The White House should shame regimes that can be shamed, isolate the shameless, help willing governments back on a pathway to respecting human rights and provide a platform for persecuted peoples.

“A little less detente and more encouragement to the dissenters,” Reagan concluded, “might be worth a lot of armored divisions.”

Alan W. Dowd is a senior fellow with the Sagamore Institute Center for America’s Purpose (sagamoreinstitute.org) and a contributing editor for The American Legion Magazine.