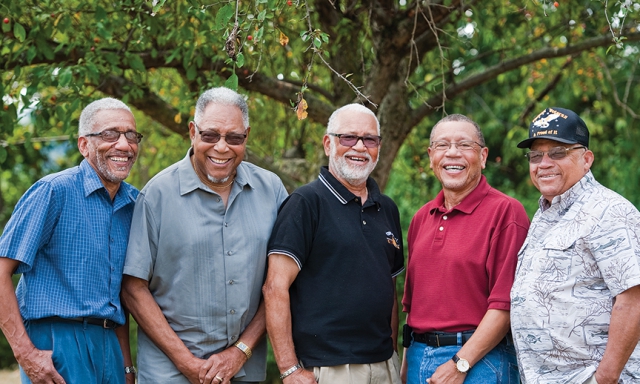 If there’s another family with 11 brothers who served in the military, Lebronze Davis would love to hear about it.

He’s not boasting. He’s not trying to get in the record books. He’d just like to know. In fact, it was only a few years ago that it occurred to him that his family might be noteworthy.

Over three decades, Lebronze and 10 of his 13 brothers joined up, starting with the oldest, Ben Jr., who entered the Navy in 1944, and ending with the youngest, Arguster, who retired from the Air Force Reserve in 1998. Together, they have a combined 165 years of military service.

“I’m the 14th child and the ninth to serve,” says Lebronze, 67, a member of Fletcher-McCollister American Legion Post 135 in Phenix City, Ala. He was drafted in 1968, went straight to Vietnam after infantry training and made a career of the Army.

Five Davis brothers, including Lebronze, retired from the military; the others served shorter periods of two, three, four, even 12 years. For each of them, enlistment was their best shot at leaving Wetumpka, Ala., and getting a good job.

“I graduated Friday and went into the Army on Monday morning,” says Octavious, 77, the fifth brother to serve. “I volunteered to go before school was out. I just wanted to get off that farm.”

Their father, Ben Sr., worked at a sawmill and grew cotton and other crops. He and his wife, Hattie, brought up their kids in a three-bedroom house, with as many as nine at home at one time.

“We had sisters and cousins who lived across the road, so we always had somebody to play with,” Octavious says. “We always had plenty to eat because we raised our vegetables and meat. We had everything but money and didn’t know any better. We just thought that was the way it was.”

Ben had only a third-grade education, Hattie ninth grade. But they set expectations for their children: you’ll finish high school.

Growing up, Octavious loved seeing his older brothers – Ben Jr., Washington, Edward and Calvin – return home wearing their uniforms. And every day he watched his teacher’s husband, an Air Force captain, drop her off at school; Octavious put a giant H on the shoulders of his shirts, telling everyone that if he ever joined the Army he’d be a captain.

He enlisted in 1957 and served two years as a medic at Fort Benning, Ga., and Fort Jackson, S.C., before getting out at the rank of corporal. Then he became a nurse and moved to California, where he worked 30 years as an operating-room technician. He retired in 2001.

Octavious never wore captain’s bars, but he couldn’t be prouder of his service. “I still like to see a sharply dressed soldier today,” he says.

It was Octavious’ idea to collect photos of his brothers in uniform for a collage, which they display at family reunions. There, you’ll find them huddled around tables, laughing, sharing memories of growing up in Alabama or swapping stories about their time in the service.

‘A LOT HAD CHANGED’ No one even knew when Nathaniel, the 10th child and the seventh to serve, went to enlist. On a summer day in 1962, he caught a bus headed to Montgomery, where he met with Army recruiters at the post office. He trained at Fort Jackson and spent most of his three years stationed in Germany with an ordnance supply company.

“Up until I went in, I hadn’t really thought much about the military,” he says. “I wanted to go to school to become a teacher but didn’t have any money.”

At the time, the United States was on the edge of tremendous social change. Nathaniel, 71, remembers the long ride to Fort Jackson; at his first stop, Columbus, Ga., there were separate waiting rooms for blacks and whites. “The bus wasn’t segregated, but at that time, you kind of segregated yourself,” he says.

While he was overseas, the push to break down racial barriers intensified with clashes in Birmingham, Martin Luther King Jr.’s March on Washington and passage of the Civil Rights Act of 1964.

“When I came back, I remember going to Montgomery with one of my brothers,” Nathaniel says. “We went to what had been an all-white restaurant and could go in and sit down and eat. A lot had changed.”

He got an apprenticeship at Ford Motor Co. in Detroit, working there 33 years as an electrician. He thinks the military gave him the confidence he needed to succeed. “The Army was a great stepping stone for me,” he says.

Now retired, Nathaniel lives in Montgomery, near Frederick, 64, and Ben Jr., 94, who ran Alabama’s American Legion Baseball program and is a 47-year member of the organization. Their younger brothers are only an hour and a half away: Arguster, 63, lives in McCalla, and Lebronze lives in Phenix City.

Though scattered, 10 of the 11 brothers who served are living; Washington died in 1994.

“As we got older we got closer, especially when we started golfing,” Nathaniel says. “For eight or nine years, we’d all meet somewhere. We’ve golfed in Florida,  Vegas, Tunica. We just picked different places.”

‘WE HAD FIREFIGHTS EVERY DAY’ Growing up on the farm, there were good days and hard days, Lebronze recalls. Chopping cotton, picking cotton, plowing – “I feel like I walked behind a mule from Alabama to New York, across to California and back, not one time but several times,” he says, laughing. “But I wouldn’t trade it for nothing.

“Mama made sure we all knew how to cook, wash and clean house. Daddy showed us how to be a man – how to take care of the family. None of us boys ever got so much as a speeding ticket. That’s the way they brought us up.”

Then came the day Lebronze had to make a decision about his future, like his brothers before him.

“I graduated from high school on a Friday,” he recalls. “Daddy said, ‘You can leave and go wherever you want to go, or you can stay home. But if you stay home, you’ve got to help on the farm.’ I left Saturday morning.”

Lebronze went to Baltimore to stay with an aunt and uncle, and later made his way to Detroit, where he got a job at a paper mill. Then a draft notice arrived. He did basic training at Fort Benning and advanced infantry training at Fort Gordon.

In Vietnam, “I spent 10 and a half months in the field,” Lebronze says. “We had firefights every day. I never got a scratch, but there are things I can’t even think about – don’t want to think about.”

Sometimes the memories surface anyway. Like the wounded soldier who was being pulled up by a rescue helicopter when the enemy shot it out of the air. He fell, hit his head on a rock and was shot three times in the back. When Lebronze and others made it to him, the soldier groaned, “I’m not going to die over here. I’m not going to die in Vietnam.”

“Last we heard, that man was at Walter Reed, still living,” Lebronze says.

During his 20 years in the Army, Lebronze was a drill sergeant and instructor, serving all over the country: Fort Carson, Colo.; Fort Leonard Wood, Mo.; Fort Polk, La.; and Fort Benning twice. He also did tours in Bamberg and Baumholder, Germany.

‘HE WAS PROUD OF US’ Edward, 86, is fourth oldest and third to serve. Like Lebronze, he did a tour in Vietnam and retired from the Army. They also share a birthday, Nov. 11 – 19 years apart.

Like most of his brothers, Edward didn’t set out to join the military. He’d heard about World War II from an uncle, Tom, a Pearl Harbor survivor. But the idea of traveling and getting an education changed his mind.

Edward joined the Air Force in 1951 and studied preventive medicine at the University of Denver. He spent a few years in the reserves and switched to the Army in 1963. Eventually, he did see more of the world, serving in Okinawa, Korea and Honolulu, as well as Fort Meade, Md., Fort Knox, Ky., and Walter Reed Army Medical Center in Washington, D.C.

From 1966 to 1967, Edward traveled Vietnam as a noncommissioned officer in charge of three medical units. From water purification to checking mosquitos for malaria, “our job there was really to keep the troops healthy,” he says.

He cherishes his memories of the last time he saw their father. The year was 1972, and Edward was headed to a symposium at Emory University in Atlanta. “He looked at all his boys and said, ‘You’re all doing a nice job,’ Edward remembers. “He was very happy and proud of us.”

The youngest, Arguster, joined the Air Force in 1971. He went straight from high school to college at Tuskegee University in Alabama, where he intended to go ROTC and become a pilot.

After a while, “I just felt like my life wasn’t progressing fast enough for me,” Arguster says. He left school and stayed with one of his brothers, Alphonza, in California for a time. Unable to find work, he decided to enlist.

During his four years on active duty, Arguster used the Air Force’s tuition assistance program to finish most of a bachelor’s degree in business administration at Texas Christian University. He worked for a trucking company for a few years and then got hired by the U.S. Postal Service, where he worked for 26 years.

While in the service, Arguster and his brothers all chipped in to take care of their aging parents.

“We’d always try to help them with something around the house,” he says. “We eventually put in running water, a bathroom, a new refrigerator. Each one of us did something or we’d send the money and take care of it.”

Arguster was the last Davis brother to hang up his uniform, retiring as a senior master sergeant. Like the rest, he says the military is one of the best decisions he’s ever made.

“I’m an American patriot,” he says. “I believe in this country. I really do. I think it’s the greatest on earth. I don’t agree with everything that goes on in it, but there’s nowhere else I’d rather live.”

Save
Tags: Honor & Remembrance, Magazine, Media, Our Pillars Your Platform