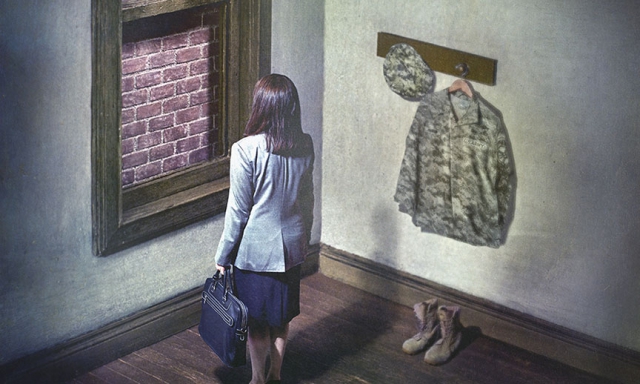 Before John Spanogle left the Army in the fall of 2014, he enrolled in a weeklong transition course at Fort Knox, Ky., and hired a professional résumé service to translate two and a half decades of leadership, training and distinguished service into civilian terms. A career officer with a top-secret security clearance and six combat tours that culminated in responsibility for U.S. Special Forces worldwide for the Pentagon, he had plenty to offer almost any employer, particularly the federal government.

If he could only have gotten its attention.

In the past year, Spanogle has applied for everything from entry-level work at VA to airport security supervisor for the Department of Homeland Security, through USAJOBS.gov. It has taken months to get a response from any of the federal agencies to which he applied. A simple acknowledgment of his application was rare. He landed not a single interview.

“It’s a sham,” says Spanogle, a retired lieutenant colonel with a master’s degree in business and a 60 percent disability rating. “The Army just riffed a bunch of guys. If it’s this hard for me, imagine what it’s like for the young enlisted soldiers. Can you see the hopelessness?”

Despite presidential proclamations, an overhaul of the USAJOBS website and federal agencies’ sloganeering about their desire to hire former servicemembers, veterans still find applying for a federal job arduous and – because the odds of success are so low – a waste of time.

“It’s ridiculous,” says Casey Curry, who served 26 years with the Oregon Army National Guard and has had much experience with the website, USAJOBS.gov. Curry spent a year looking for work through USAJOBS when she got out in 2007, without success. Then she interned with the Oregon employment office in 2012 and 2013, helping other veterans trying to negotiate the federal job application process. It was as frustrating as it was fruitless.

“I don’t know of one person who got a job using that website,” says Curry, who is now outreach coordinator for the Returning Veterans Project, which helps connect veterans and families in northwest Oregon and southwest Washington to free counseling and other health services.

Roger Peterman, who helps veterans find jobs as transition assistance adviser for the Indiana National Guard, cites equally bleak numbers. “In eight years of working with USAJOBS, I only know of two people who got jobs applying through the website. And either they knew somebody or we were able to connect them with somebody in the federal agency who could pull them along.”

The problems with USAJOBS are well known. The Office of Personnel Management (OPM) stopped using a contractor to administer the website in 2011, brought it in-house and made several improvements, a spokesman says.

The relaunch of what was called USAJOBS 3.0 was fraught with problems, however, and quickly became the object of ridicule on social media. Even today, the agency acknowledges that USAJOBS needs more work, including making the online application process more user-friendly.

“Veterans are not alone in expressing frustration with the federal hiring process, including USAJOBS.gov,” an agency spokesman says.

But the website is unavoidable. USAJOBS is the single gateway for a multitude of civil service jobs. That alone is an issue. “There are tens of thousands of résumés on USAJOBS,” Peterman says.

Federal statistics show just how competitive it is. Veterans initiated nearly 7.5 million applications through USAJOBS in fiscal 2015, an increase of 2.4 million compared to fiscal 2013.

Veterans also suspect that many positions are posted to comply with legal requirements by agencies that have already decided who they want to hire. And there are complaints that some job listings aren’t current. “They don’t keep it updated,” Curry says. “People are filling out applications for jobs that are already closed.”

There’s also a sense that applications go into a black hole where veterans preference isn’t considered. “There’s no accountability on the federal agency side,” Curry adds. “You don’t know if they are looking at (veterans preference) or not.”

OPM disagrees. “USAJOBS.gov is the means by which veterans can find information about many job vacancies,” an agency spokesman says. “In this context, USAJOBS.gov helps veterans use the hiring preference to which they are entitled by making them aware of job openings they might not otherwise know are available.”

But there’s evidence that some federal agencies purposefully circumvent veterans preference laws and discriminate against veteran applicants who successfully negotiate USAJOBS. The Bonneville Power Administration (BPA), an arm of the Department of Energy, manipulated the qualification ratings of at least 117 veteran applicants from 2010 to 2012, according to an investigation by the Energy Department’s inspector general. That amounted to nearly half the applicants for BPA jobs.

In at least one case, a BPA administrator closed the hiring process after learning that a veteran was the most qualified applicant – and then rewrote the job description to include criteria the veteran couldn’t meet. BPA’s human resources department was ultimately blamed for the agency’s discrimination, and vowed reform after its hiring practices were exposed in 2013.

Vietnam War veteran Rick Shuart had a notably better experience with USAJOBS. While it took him a while to master the website, he learned to tailor his résumé for each job he applied for and write a cover letter to the hiring manager indicated in the job posting, he says. Shuart also became selective about the positions he pursued.

“I rarely applied for a job where there was one slot open,” he says. Still, it took him a year to find a job even though he has a master’s degree in business administration. VA even turned down his application for a file clerk’s job in Baltimore.

Today, Shuart helps fellow veterans find work as an employment development manager at Services for the UnderServed in New York City. But his organization rarely steers former servicemembers toward USAJOBS because most cannot afford the time it takes to secure federal employment. Instead, Shuart’s organization focuses on private employers with whom it has a relationship – the sorts of places it can call and encourage a hiring manager to review a veteran’s application.

Likewise, Peterman also encourages veterans to look beyond the federal government for work.

“There’s a lot of great civilian companies looking for veterans,” Peterman says. He works with an organization called Operation: Job Ready Veterans, which claims a 70 percent success rate in helping former servicemembers find work. But even then, it takes time.

“You’ve got to be patient,” Peterman advises. “You’ve got to be able to sell your skills from the military. Get somebody who can help you.” Develop an elevator speech. Be willing to take an entry-level job to get a foot in the door.

In the end, Spanogle finally landed a job as vice president of a nonprofit organization where he will help former National Guardsmen find jobs. He’s looking forward to making differences for his fellow veterans. “This is everybody – not only the unemployed, but the underemployed as well,” he says.

But he won’t be looking to USAJOBS for help. “I’m done with it,” he says. “It’s a ridiculous waste of time.”