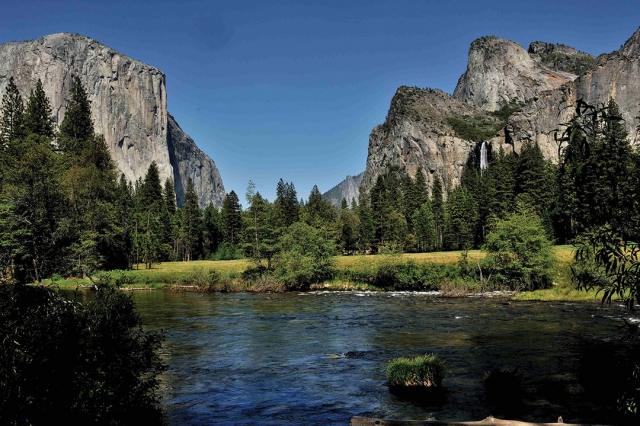 With their majesty and beauty from sea to shining sea, our national parks are a unique celebration of what it means to be an American – even more so this year with special events and activities as the National Park Service (NPS) celebrates its 100th anniversary.

The parks have a special connection to the U.S. military; Army Rangers were charged with protecting the first parks, including Yellowstone, Sequoia and Yosemite, in the 1800s before the National Park Service was formed. Today, veterans and civilians alike are experiencing the parks’ diverse landscapes – from deserts to mountains to massive redwoods – in life-changing ways.

POWER OF THE PARKS For two veterans, both of whom suffer from post-traumatic stress disorder, the parks have had special meaning. J.T. Ibanez, a 36-year-old Iraq War veteran from St. Louis, spent 25 days exploring 12 national parks in 2016 in an effort to help improve his PTSD symptoms. Ibanez says the parks help him escape the chaos of daily life and find peace, something that doesn’t come easily to him.

“I can’t really explain the feeling the parks provided me, but maybe it was the moments of silence as the wind rustled the leaves in the distance,” Ibanez says. “Maybe it was the beauty of the parks as I hiked down the trails, or maybe it was just going into the unknown and not being filled with fear and anxiety.”

Wayne Rogers is a retired Army sergeant who was nearly killed in Fallujah in 2007 when a suicide bomber drove a truck loaded with explosives near his outpost. He says the national parks have saved his life. He began volunteering at Fort Pulaski National Monument in Georgia while on active duty, and after retiring he worked at Valley Forge. He is currently a permanent park guide at Independence Hall in his hometown of Philadelphia.

A longtime history buff, Rogers says his work with the national parks gave him a purpose and structure, and helped him readjust to loud noises (such as musket and cannon fire at the parks), as well as to crowds. Talking about what life was like for previous generations of U.S. soldiers helped him put his own experiences into words. “It doesn’t matter what time period you are in, a soldier is a soldier and war is war,” he says.

NATIONAL PARKS 101 The national park system got its start in the late 1800s thanks to explorer and conservationist John Muir’s passion to protect his favorite natural areas in the United States. It wasn’t until 1916, however, that the NPS was formally organized under the presidency of Woodrow Wilson.

Today, NPS manages 84 million acres of public land, which had more than 307 million visitors in 2015. While the agency oversees the 59 major national parks, it also manages 410 different sites with various designations, such as national monuments, memorials, battlefields and military parks.

There are several ways for members of the military and veterans to gain free or discounted admission to our national parks. Active-duty military personnel, along with their dependents, are eligible for a free annual pass to all national parks. Veterans may qualify for a lifetime pass for just $10 if 62 or older, and those with a permanent disability are granted free lifetime passes.

Another option is to visit a national park on Veterans Day, when entrance is free for everyone, or on other special free-admission days in celebration of NPS’ centennial – including Aug. 25-28 and Sept. 24.

PARKS NOT TO MISS A simple place to start your exploration of a national park site is online at FindYourPark.com, where you can locate the park nearest you by typing in your ZIP code. You may live closer to one than you realize.

The most popular national parks include Grand Canyon in Arizona, Great Smoky Mountains in Tennessee, Rocky Mountain in Colorado and Yosemite in California. During this centennial year, be aware that these parks may reach capacity, especially on days with free admission.

Yellowstone National Park is also one to add to your vacation list, as it is the nation’s – indeed, the world’s – first national park. It ranks No. 5 on the list of most visited U.S. national parks. Our country’s largest national park, at more than 13 million acres, is Alaska’s Wrangell-St. Elias National Park and Preserve.

There are also many national park sites that honor Americans who served in various wars, or have special meaning for our military and veterans. Famous battlefield sites include Antietam, Gettysburg, Saratoga and Fort Sumter. The World War II Valor in the Pacific National Monument, home of USS Arizona, is a popular site that honors those killed in the Dec. 7, 1941, attack on Pearl Harbor. Veterans are also encouraged to visit the Vietnam Veterans Memorial, the National World War II Memorial, the American Veterans Disabled for Life Memorial and the African American Civil War Memorial, all located on the National Mall in Washington.

PROGRAMS FOR VETERANS Many of the national parks offer special activities and programs to bring veterans to the national parks, encourage volunteering and employment, and honor their service. For example, Mount Rushmore recognizes veterans and active-duty military each evening during the summer through Oct. 1, beginning at 8 p.m. After a short ranger talk and movie, all veterans and military in attendance are invited to be recognized on stage and help with the retirement of the colors. The event concludes with Mount Rushmore lit in white lights.

The Vets on the River program at St. Croix National Scenic Riverway in Minnesota and Wisconsin gives veterans an opportunity for healing along the river. Through a partnership with Rivers of Recovery, a nonprofit organization that helps Afghanistan and Iraq combat veterans, the park offers canoeing, kayaking, camping and fishing expeditions to those who suffered physical and psychological injuries during military service.

The Sierra Club also operates a variety of programs for veterans in the national parks. As part of a series called “The Land We Defend,” they teach active military and veterans about public lands currently at risk. The organization will also host two rafting trips this fall to Dinosaur National Monument, open to veterans and 9/11 first responders.

“The goals of these outings are to highlight the restorative power of nature, as well as demonstrate why we need to protect our wild places and how veterans can use their uniquely powerful voice to make a lasting impact,” says Rob Vessels, an Army veteran of the Iraq and Afghanistan wars who heads the Sierra Club’s Military Outdoors Initiative.

TRAVELING TO THE PARKS Teton Mountain Lodge and Hotel Terra – both in Jackson Hole, Wyo., and close to Grand Teton and Yellowstone – offer 10 percent off admission for all veterans. If you’d like to RV to the national parks, try Tracks & Trails (tracks-trails.com), which plans an itinerary for you, suggests camping sites and offers a 10 percent discount for veterans and military.

And if you can’t get to a park in person, you can take an armchair journey by book or even virtual reality. Earlier this year, Lonely Planet released “National Parks of America: Experience America’s 59 National Parks,” a full-color coffee-table book that takes readers through all 59 parks with panoramic photography and detailed information. You can explore Yosemite virtually online at YouVisit.com/tour/rockthepark.

If you’re considering a trip to one of America’s great national parks, keep Ibanez’s advice in mind: “One trip won’t cure anyone of anything, but in my experience the parks really helped me think outside the box and push through obstacles I didn’t think I could overcome. Anyone can experience that therapeutic feeling if they take the time to just get out and go find their park.”

Lyn Mettler is a freelance travel writer who blogs at GotoTravelGal.com.