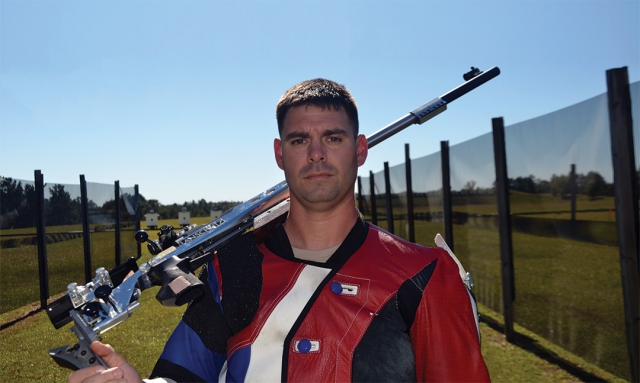 Sgt. 1st Class Michael McPhail doesn’t know where, or who, he would be without shooting.

It’s because of his skill with a rifle that McPhail went off to shoot at college, where he met Kari, his wife and the mother of his two children.

Shooting then led him into the Army, where he is a member of the award-winning U.S. Army Marksmanship Unit based at Fort Benning, Ga. – a position that has allowed him to hone his skill over countless hours on the range and in worldwide competitions.

McPhail’s steady hand and keen eye, along with his ability to calm every nerve in his body to focus on firing a bullet at a target the size of a dime, will take him to a place this summer that he never envisioned as a kid growing up in a small Wisconsin town: Rio de Janeiro, to compete in the 2016 Olympic Games.

“It’s amazing how small decisions seem at the time, how they affect your whole life,” he says.

McPhail is representing Team USA at the Olympics for a second time, having placed ninth in his event of choice, the 50-meter rifle prone, in Beijing in 2012. But he’s also representing a group of people who played a significant role in putting him on this path: the people of Darlington, Wis., and American Legion Post 214, where he’s a member.

Belonging to his hometown Legion post means a lot to McPhail.

“People who are in the Legion are people who served,” he says. “I think it’s important to remember where you came from and to honor and respect the people who came before you.”

Post 214 sees McPhail in a similar light. He is serving his country with honor, and its members – many of them family friends and relatives – want to recognize his accomplishments.

“We are proud of him and proud that he is from our little town in southwestern Wisconsin,” says Dave Gough, commander of Post 214 and one of the Legion’s national vice commanders.

‘I REALLY LIKE TO WIN’ McPhail doesn’t remember exactly when he was introduced to shooting. It was something done by just about everyone in his hometown. But he does recall that by middle school, he greatly enjoyed hunting and shooting, and he was really good at it.

“Hunting, as a hobby, that’s something I truly enjoy,” McPhail says. “A family friend really took me under his wing and took me hunting a lot. He kind of got me into shooting.

“In seventh grade every day in the fall I’d get done with school and I’d run home after that last bell rang ... and he’d be sitting in the driveway waiting for me to come home to go pheasant hunting.”

That friend is Bernie Wiegel, who turned 79 in June. A pretty good shot himself, Wiegel entered rifle-shooting competitions throughout Wisconsin and was a four-time state champion. Wiegel recently had a stroke; his wife, Mary, says he recalls working with McPhail years ago.

“He could tell that Mike was an exceptional young man for shooting because he took it so seriously,” she says. “He just took Mike under his wing. He would take him hunting, take him to the range all the time and give him pointers.”

Wiegel estimates that he has mentored more than 100 kids over the years, taking many to the range to share tips and into the woods to put those skills to the test. But he saw in McPhail something special – this was someone who had the same passion for the sport he did.

“Mike would go to the range and shoot by himself,” Wiegel remembers. “The other people didn’t really do that very much. Mike could go up there and just shoot and shoot and shoot. He would shoot 200 rounds. He could spend hours.”

Wiegel and McPhail didn’t just share a passion for the sport. Ask the former what he loves so much about shooting and he quickly responds, “The winning part.”

McPhail doesn’t hesitate when asked the same question. “I really like to win,” he says. “I’m good at it. I win, which I enjoy, so I work harder.”

‘SHOOT A QUALITY SHOT’ After high school, McPhail decided to go someplace where he could keep shooting. He attended the University of Wisconsin-Oshkosh, and part of being on the rifle team meant two years in Army ROTC.

Still, McPhail hadn’t thought much about the military as graduation neared. But he was approached by recruiters who talked to him about the Army Marksmanship Unit, and decided to sign up in the winter of 2005.

The chance to keep shooting was too good to pass up. It meant that he could not only keep doing something he loved, but he could push himself at an elite level.

What McPhail found is that he can be quite good. He’s been on gold-medal world championship teams in 2006 and 2010, when he individually placed eighth and 15th respectively. In the 2014 World Championships, McPhail earned a bronze medal in the 300-meter prone event.

In the 2015 World Cup USA and World Cup Munich, McPhail earned gold medals. He took silvers in the National Championships and the Pan American Games that same year.

McPhail’s drive to be the best pits him not against other shooters, but against himself and the range. At the end of the day, he has all the control. How he places has everything to do with how well he is able to control himself and master the conditions of the range.

“It can be frustrating,” McPhail says. “You’re trying to do this, and some days it’s just not happening for you. A lot of times when I go to the range, there’s 60 other people out there, but I compete with the range.”

It can be a formidable opponent. Winds pick up and die down, and shooting a small-caliber bullet means it can be a real challenge.

“In any wind, it moves a substantial amount. It can move close to ¾ inch some days,” he explains. “When you’re shooting at a target that’s smaller than a dime at 50 meters, when you have wind, it makes a difference.”

He plays games in his head to determine what went wrong with one shot and how to improve on the next. “I like the figuring it out. It’s very finicky.”

Calculations and adjustments aside, McPhail said he tries to keep his mind clear and his emotions in check. He repeats one thing before he shoots each time: “Shoot a quality shot.”

“That’s really all it comes down to,” he says. “That’s the only thing you can control. It’s a game of perfection, and you’re working back from there. The only part that I can control is if I did my job right and I shoot a quality shot.”

GIVING BACK When McPhail walks onto the range in Rio de Janeiro, he’ll be alone with those thoughts. It will be him and his attempt at a quality shot every time.

But he knows he didn’t get to this place alone. There have been many instructors, from Bernie Wiegel to his fellow soldiers. Three gunsmiths work with McPhail, and he and his teammates support each other.

There are others, too, not the least of which is his wife, Kari. She works full time and cares for their children, Addison, 5, and Mason, 6 months, while McPhail travels to competitions for weeks at a time.

Those people and their support are why McPhail works so hard in hopes of a gold medal in the Olympics. He doesn’t want it for himself.

“That doesn’t happen without the people who got me started: the people in college, my parents, my wife,” he says. “You can’t do it on your own. If I win at the Olympics, I’ll give (my wife) that medal. That’s hers.”

McPhail also believes in paying it forward. He had many mentors along the way, so he spends a lot of time working with a junior shooting club in Georgia, where he’s stationed.

That club has had about a dozen participants receive scholarships to schools with shooting programs, including the U.S. Military Academy at West Point.

“Whether or not they pursue shooting after school is on them, but to get them to school on scholarship is pretty awesome,” McPhail says. “I like giving back. The sport has given me a lot.”

After the Olympics, McPhail isn’t sure what he’ll do next. He wants to stay in the Army as long as it will have him, and he believes he has many good years of competition left.

“Without the Army, there’s no way I could be where I am,” he says. “To me, it really is the greatest job there is. I love it.”

Meanwhile, his daughter is getting acquainted with a BB gun. Addison may take an interest in shooting like her father, or she might not, but that’s not what’s important to McPhail.

“We shoot a little bit in the yard until she gets bored with it, then we go play with dolls or something like that,” he says. “If either of them want to shoot or compete, that’s fine. I’ll support them in anything they want to do.”

That’s important, he says, because he himself could have gone in any number of directions, but he was lucky enough to have people support his passion.

Brian Wallheimer is a freelance writer who spent more than a decade in newspaper journalism and public relations. He lives in Rockford, Ill.