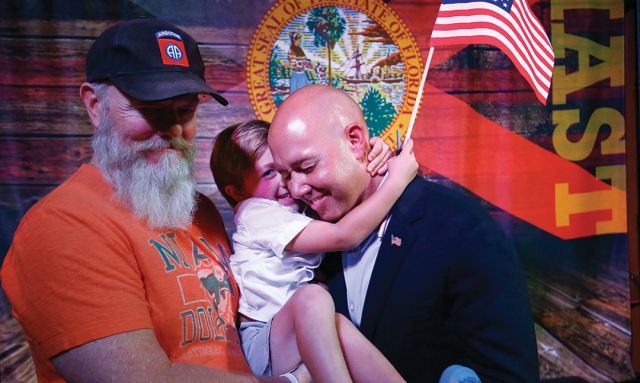 he good news is that some of those who have served our country in uniform are answering our country’s call to serve yet again – this time in Congress. Veterans Campaign, a nonpartisan organization that trains veterans for “a second service in civic leadership,” reports that the number of veterans in the Senate had decreased in every election since 1982 – until 2014, when the trend was reversed. And Iraq and Afghanistan veterans accounted for one-quarter of the Senate’s 2014 freshman class.

As Military Times reports, 54 veterans of the Iraq and/or Afghanistan wars ran for Congress in 2016 – “almost a third of 172 veterans running in all the open congressional races.” In fact, Military Times notes, the number of recent war veterans in Congress has risen every two years since 2006. That trend will continue in the 115th Congress (2016-2017). At least 27 veterans of post-9/11 wars won congressional races Nov. 8 – up from 26 in the last Congress.

Even with several older veterans retiring, the new Congress could field as many as 103 veterans. (Given that some seats were still in question as this issue went to press, the final tally for the 115th Congress was not yet official.) The number of veterans on Capitol Hill hasn’t dipped below 100 in 70 years, according to Veterans Campaign.

Now for the bad news. The overall number of veterans serving in Congress has fallen steadily in recent years. As the Congressional Research Service (CRS) reports, the number of veterans peaked in the House during the 90th Congress (1967-1968), when they accounted for 75.2 percent of the body, and in the Senate during the 94th Congress (1975-1976), when they comprised 80 percent of the upper
chamber.

This was largely a function of World War II. With 16 million Americans serving in the military during the war – fully 12 percent of the nation’s 1941 population – the number of veterans serving in Congress naturally grew in the postwar period. As historian Victor Davis Hanson observes, “Being a World War II veteran was virtually mandatory for any congressional leader until about 1970.” Indeed, by 1969, 398 of the 535 members of Congress were veterans (74.3 percent).

Compare those numbers to recent trend lines. According to CRS, at the beginning of the 114th Congress, 101 members had served in the U.S. military: 81 in the House and 20 in the Senate. That equals 18.8 percent of Congress.

“Thanks to OIF/OEF vets, we may be reversing this four-decade-long decline,” says Seth Lynn, executive director of Veterans Campaign.

We are nowhere near that percentage. Instead, in a time of war and international instability, less than one-fifth of those who decide when, where and whether to give the president authorization for military action, how much to allocate to national defense, and whom to entrust with the keys to the Pentagon, VA, CIA and National Security Agency have military experience.

The same trend is evident at the other end of Pennsylvania Avenue. By the time the United States inaugurates Donald Trump as its 45th commander
in chief, only one of the four presidents elected between 1992 and 2016 will have served in the military (George W. Bush).

However, there’s an asterisk. We like to think that military service has always been a presidential prerequisite, but that’s something of a post-World War II anomaly. Although an uninterrupted string of nine presidents between 1945 and 1993 were veterans, no president had military service between the end of Theodore Roosevelt’s presidency (1909) and the beginning of Harry Truman’s (1945).

Of course, there’s an asterisk to this asterisk. VA notes that 26 of the 44 men who have served as president also served in the military (that’s 60 percent). Five more served in state militias (that’s 72 percent). So, perhaps the immediate pre-World War I era is the anomaly.

In short, it seems Americans have traditionally viewed military service as an important indicator of the kind of judgment and experience needed to serve in the White House and Congress. If that viewpoint no longer holds sway, those who worry about the dwindling ranks of veterans in elective office can find some solace in history: long before he served as president, John Adams proved himself a wise and able legislator in war and peace, though he never served in the military. Likewise, Franklin Roosevelt proved himself a resolute and ready commander in chief, though he never served either.

DISENCHANTMENT As the bipartisan gamble known as sequestration shrinks the size of the military, as active-duty personnel and veterans grow increasingly disenchanted with government, and as military service and the military itself become an abstraction for most Americans, it’s difficult to see how this trend will be reversed.

Let’s take a closer look at each of these factors.

This puts immense pressure on those who remain in uniform and sends an unintended message that the military is somehow to blame for our fiscal woes. Nothing could be further from the truth. Defense spending is just 14.7 percent of the federal budget (down from 20 percent in 2011). In fact, Washington could have eliminated the entire defense budget in 2013 ($633 billion that year), yet we still would have had a budget deficit ($680 billion that year) – and wouldn’t have put a dent in the national debt ($16.7 trillion that year).

If sequestration continues to hack away at the military, as the American Enterprise Institute’s Thomas Donnelly warns, “(w)e, as a civilian society, will have broken faith with the very small number of Americans who go in harm’s way to defend us.”

That brings us to the quite serious issue of disillusionment among the troops. The armed forces face a morale crisis unlike any since the Vietnam era. A survey of active-duty troops by Military Times reveals “a force adrift,” with America’s defenders reeling from deep cuts and feeling “underpaid, underequipped and underappreciated.” Forty-four percent say pay is good/excellent, down from 87 percent in 2009; 45 percent say health care is good/excellent, down from 78 percent in 2009; and 27 percent say the senior military leadership has their best interests at heart, down from 53 percent in 2009. VA’s problems of recent years have raised similar concerns among veterans, with 60 percent saying they are less confident in VA.

Finally, we come to the growing disconnect between the U.S. military and the American people, including their elected representatives.

“Military illiteracy has inevitably worsened with each succeeding generation” since the end of the draft and creation of the all-volunteer force in 1973, argues Col. Kenneth Allard, former dean of the National War College. Indeed, with only 2.2 million active-duty troops and reservists serving a nation of 320 million, a tiny fraction of Americans have family or friends in the military nowadays. That means the overwhelming majority of Americans simply don’t understand – let alone experience – the sacrifice, burdens and benefits of military service.

As author James Fallows observes, “Everyone ‘supports’ the troops but few know very much about them.” Instead, most Americans are so disconnected from their nation’s military that it’s something of an abstraction to them.

That’s not the sort of relationship Americans should have with their military, especially as the nation wages war against transnational terrorists, digs in for Cold War II with a revisionist Russia and braces for a dangerous decade with a rising China. “Battles are won,” Bradley observed, “by soldiers living in the rains and huddling in the snow. But wars are won by the great strength of a nation – the soldier and the civilian working together.”

To reconnect the American people and their military, some are calling for a return to the draft. The thinking in 1973 was that a military comprising solely people who wanted to serve – even if it was smaller – would be more effective than a military comprised of people who would rather be somewhere else. The theory proved to be sound. For almost 45 years, the all-volunteer force has defended America’s interests and defeated America’s enemies.

To be sure, reinstating the draft would remind Americans that they are connected to something more than their smartphones, and it would certainly create a larger pool of veterans from which voters could draw at election time. However, is that the purpose of the U.S. military? Given the metastasizing threats confronting America, a case can be made for reinstating the draft. But creating a training ground for congressmen is not the best rationale. When we try to use the military to achieve some non-military social aim – no matter how worthwhile – we can do more harm than good. That may explain why Pew polling reveals that 68 percent of all veterans – and 82 percent of veterans who have served since 9/11 – oppose reinstating the draft.

BOLDNESS Amid mounting problems at home and mounting threats abroad, the American people need Washington to make lots of tough decisions in the years ahead. The U.S. military is trained to do exactly that. As Rep. Ruben Gallego, D-Ariz., a veteran of Iraq, explained in an interview with U.S. News & World Report, military service “taught me about how to plan and how to execute, how to organize and, really, how to be bold.” Congress needs more veterans to bring that boldness, that sense of purpose, to the policymaking process.

Historian John Keegan once observed that the world of the warrior “exists in parallel with the everyday world but does not belong to it.” Put another way, America’s warrior class is motivated by a different set of values – honor, duty, service, country – than many of the people it defends. If we are to maintain a republic of free people, those values must inform the policymaking process.

Veterans are heroes, but they aren’t superheroes. They can’t fix everything. Still, they have shown a willingness to put their nation ahead of themselves. After fighting Nazis and kamikazes, communists and jihadists, veterans understand that America has real enemies – and those enemies are not the people on the other side of the political aisle.

“Our challenges and our enemies don’t know us as Republicans or Democrats,” Indiana’s Todd Young, a Marine Corps veteran, said after winning a seat in the Senate.

“For any veteran who is considering running in the future,” urges Rep. Lee Zeldin, R-N.Y., a veteran of Iraq, “our country and our Congress needs them to step up and serve yet again.”

Perhaps Zeldin’s words – and the nation’s many challenges – will inspire more veterans to do just that in the years ahead.

Alan W. Dowd is a senior fellow with the Sagamore Institute and a contributing editor for The American Legion Magazine.