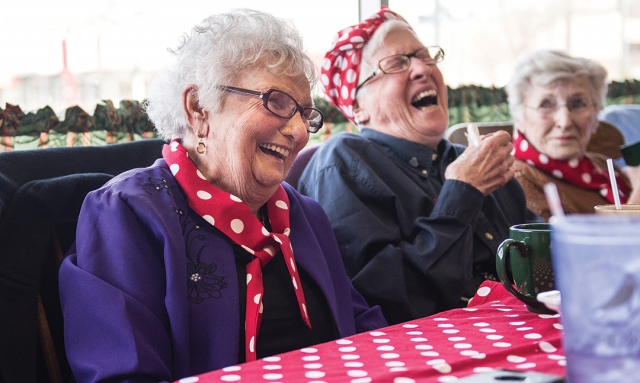 Like many original Rosie the Riveters, Frances Carter is humble when asked about the role they played on the homefront during World War II.

“A Rosie was an ordinary woman doing extraordinary work in an extraordinary time,” says Carter, 94, who founded the American Rosie the Riveter Association (ARRA) in 1998. “We were doing it to get the war over (with) and get the boys home.”

Carter worked as a B-29 aircraft factory riveter in Birmingham, Ala., in 1943 and 1944, and became a professor at Samford University in Homewood, Ala. She founded ARRA after she and other real-life Rosies shared their experiences during a “Rosie Day” event at the Little White House in Warm Springs, Ga., where President Franklin Roosevelt often vacationed. Carter and her late husband, John – a former Army paratrooper – began traveling the country to educate people about the Rosies’ legacy, giving 600 speeches in 17 states. Carter’s daughter, Nell Brown, now joins her for presentations.

The war caused a seismic shift in America’s workforce, with an estimated 6 million women leaving home for jobs – and ushering in employment opportunities now taken for granted. More than half were employed by defense industries, manufacturing aircraft, warships and munitions; the rest filled jobs vacated by men or did war-related volunteer work. Another 350,000 women served in uniform abroad and at home.

Civilian women who stepped up became indelibly linked to a 1940s “Rosie the Riveter” advertising poster to recruit female workers. Some historians say the bandana-clad Rosie is a composite of several women, including Rosa Bonavita, a New York worker who set a speed record building bombers and was the subject of a newspaper article; Rosalind P. Walker, a riveter who inspired the pop song “Rosie the Riveter”; Geraldine Doyle, whose photo was incorporated into a “We Can Do It” poster; Mary Doyle Keefe, a part-time riveter who was Norman Rockwell’s “Rosie” model; and Rose Will Monroe, who worked at the Willow Run Bomber Plant and starred in a Walter Pidgeon film promoting the sale of war bonds.

Thanks to that movie, Monroe is the woman most people identify as the original Rosie, says Kevin Walsh, executive director of the Yankee Air Museum in Belleville, Mich.

“She and an entire class of women stepped into American factories during World War II and began making precision components for the military,” he says. The quality of their work was “equal or superior to that of men. This ‘unexpected excellence’ shattered traditional beliefs about women handling power tools and operating heavy equipment.”

Lorraine Osborne of Whittaker, Mich., was 17 when she joined a team of 40,000 workers at Willow Run in Ypsilanti, about 35 miles from Detroit. The massive plant had a mile-long assembly line and was the world’s largest factory at the time, producing one B-24 bomber every hour.

“They were hiring and sent buses to parts of Kentucky to haul ’em up here to work,” recalls Osborne, 91, who moved north with her family. “They didn’t give you much training ... we worked hard. We had to wear brown or dark blue slacks. If you couldn’t afford them, you could get overalls for free. We had earplugs, but nothing for eyes, no protection, in the beginning.”

Osborne suffered an injury when a small piece of aluminum lodged in one eye. Until it healed, she sold war bonds. When she attempted to sell some to a male co-worker, he cussed her out, saying he was from Germany “and making money to send back to Germany to buy war materials.” After Osborne reported the remarks to supervisors, the FBI came and hauled him out, she says.

After Osborne’s eye healed, she wore glasses (“not safety goggles, but glasses that were like eyeglasses”) and returned to the riveting line. She worked two and a half years before meeting the man she’d marry.

Vivian Litchard, 93, of Ypsilanti, worked in Willow Run’s sewing department from 1942 to 1945. She explained how three parts of the plane – rudder, elevator and ailerons – were hand-covered with material: “They had this big cutting machine that followed the pattern and cut out shapes, which went to sewing machines and were later put on a frame and fastened on with screws. It was sent to the paint department and sprayed with a substance that made it feel like a drum. We’d get some of those parts back from overseas with the covering gone and we had to replace it. Later they had soldiers come in to learn how to recover so they could do it (overseas).”

Litchard also recalls the time her “handsome, charming boss” asked her on a date.

“I was 18 at the time,” she says. “My dad said, ‘Is he married?’ I said, ‘Of course not. Why would he ask me out?’ We talked a little more, and Dad told me to think it over. The next day I told (the boss) I couldn’t go out with him. Six months later, he brought his wife into the department.”

Carter recalls male workers in the Birmingham factory playing jokes on them, and not all were friendly. “We broke the glass ceiling,” she says. “It changed me in that it broadened my outlook on life. I decided women could do almost anything.”

As for Osborne, she never thought twice about doing what might have been seen as a man’s job. “We just wanted to win the war,” she says.

Osborne went on to work at a Ford Motor Company generator plant for 32 years. She and her husband Paul, had three children; after his death 44 years ago, she never remarried. She has six grandchildren and 12 great-grandchildren.

Litchard’s husband, Lyle, served in the Army and became an engineer. She has a large family, too: three children, six grandchildren and eight great-grandchildren. After the war, she worked for a company that took over the bomber plant before she quit to devote her time to family.

After her husband’s death in 1995, Litchard visited Europe with a seniors group. “Going to Normandy made (the war) more real to me,” she recalls. “I was standing on top of the cliffs looking out to the water and saw three soldiers walking ashore. I knew they weren’t there, but I saw them. I am so glad I went.”

ARRA currently has more than 5,300 members: a dwindling number of Rosies (women who worked or volunteered between 1941 and 1945), Rosebuds (female descendants of a Rosie) and Rivets (male descendants or spouses of Rosies or Rosebuds).

Jane Vass is one of the Yankee Air Museum’s original volunteers for the “Save the Bomber Plant” campaign, which successfully preserved a 144,000-square-foot portion of Willow Run as a new home for the museum.

“That generation tugs at my heart,” she says. “They are inspirational, tough, and to this day, at their ages, still hard-working. I believe those planes are the reason my family survived (the Holocaust). It’s important to keep their story alive.”

Carter, Osborne and Litchard say they are amazed at the attention the original Rosies are receiving. Last year, Osborne and Litchard joined approximately 30 other Rosies for a Talons Out Honor Flight trip to Washington, D.C., where they visited Arlington National Cemetery and posed for photos in front of the U.S. Capitol.

“It was exciting and gratifying when people came up to us and thanked us,” Litchard says. “A few asked for autographs. I did have a few tears in my eyes.”

Carter pauses when asked how she’d like the Rosies to be remembered, then says, “Rosies served well, with dignity.”

Audrey T. Hingley is a freelance writer living in Virginia.

Save
Tags: Magazine, Heroes to Hometowns