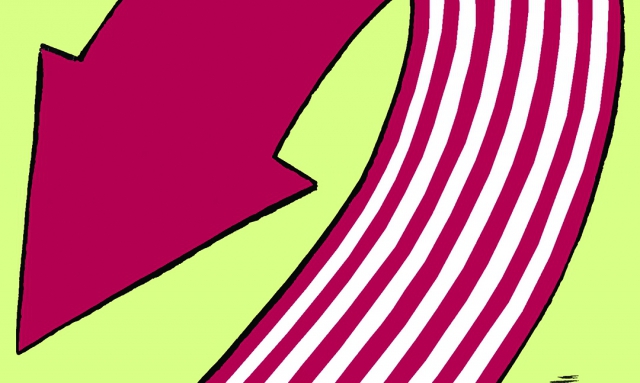 As world war gave way to cold war, Americans came to the realization that “security was something that had to be worked at, to be managed,” historian Derek Leebaert writes in “The Fifty-Year Wound.” “Americans could not turn their backs on the world.”

So Cold War-era presidents forged a broad consensus about America’s place and purpose in the world: to build a liberal international order in which the United States could flourish, to engage the world and lead the West, to guard the frontiers of freedom and contain the Soviet empire.

But a quarter-century after the collapse of the Soviet Union – and after 16 years of waging war on terrorism – that consensus has frayed. According to Pew polling, 57 percent of Americans want the United States to deal with its own problems and “let other countries get along the best they can on their own” – up from 30 percent in 2002.

Many political leaders seem to share the public’s view that it’s time for the United States to take a much-deserved break. The Obama administration, for instance, employed phrases such as “leading from behind” and “nation-building here at home” to explain its stand-off foreign policy, which included withdrawal from Iraq, drawdowns in Afghanistan, “time-limited” operations in Libya, unenforced “red lines” in Syria and steep defense cuts.

The 2016 presidential election revealed that the nation-building-at-home caucus represents a sizable swath of the political spectrum. In a surprising echo of President Barack Obama, President Donald Trump declared that “we have to build our own nation” and embraced the historically fraught “America First” label. He even described “trying to topple various people” – we can infer he was talking about Saddam Hussein – as “a tremendous disservice ... to humanity.”

Obama’s rationale for disengagement was based on an optimistic belief that the trajectory of history leads inevitably to a better world. That’s what he meant when he talked about the “arc of history” or consigned a regime to “the wrong side of history.” It’s a quintessentially American view. As the Brookings Institution’s Robert Kagan observes, “Americans, Europeans and other children of the Enlightenment tend to believe history has a direction, progressively upward.”

Perhaps that’s why Obama seemed unconcerned about the U.S. stabilization force withdrawing from Iraq, Russia dismembering a sovereign Ukraine, or sequestration shrinking America’s reach and role. No worries, as people say. Obama’s half of the nation-building-at-home caucus seems to believe history is on the side of progress, regardless of how engaged or disengaged the United States happens to be. Trump’s half seems to believe the world is a mess and won’t get any better, regardless of what America does or doesn’t do.

GREAT POWER, GREAT PROBLEMS If only these conclusions held true. If only the United States could take a vacation from foreign policy. If only our security didn’t need to be “worked at.” But it does. History teaches that securing U.S. interests doesn’t happen without effort, that international stability is one of those interests, and that when liberal powers fail to promote a liberal international order the “arc of history” bends toward darkness – or chaos.

For a great power like the United States, national security and foreign policy are not programs that can be automated or outsourced. Rather, they are problems that must be constantly managed. Consider the century-plus that America has been a power-projecting nation.

The Spanish Empire posed a national-security problem, and its brutal treatment of Cuba sparked outrage in the United States. So, for strategic and humanitarian reasons, America went to war with Spain. No sooner had Washington solved the problem created by Spain’s crumbling empire than it faced the problem of administering Cuba, pacifying the Philippines and defending far-flung possessions from Puerto Rico to the Pacific.

As U.S. interests grew, President Theodore Roosevelt recognized that the United States needed a hub for operations in the Pacific Ocean. A naval base in Hawaii solved that problem; by the end of Roosevelt’s presidency, large sums were being allocated for readying Pearl Harbor to host a fleet of warships. That solution, of course, would present its own set of problems – and a tempting target – 33 years later.

President Woodrow Wilson’s solution, initially, to the foreign-policy problem of war in Europe was neutrality, which only deferred the problem to a later date. Wilson’s next solution was the very opposite: a world body to enforce peace, a promise to make the world safe for democracy, an endorsement of self-determination. These well-intentioned solutions created as many problems as they solved.

The United States’ postwar turn inward aimed at insulating the nation from Europe’s problems, but it only allowed those problems to metastasize.

Appeasing Japan directly (after its warplanes bombed USS Panay without provocation in 1937, President Franklin D. Roosevelt failed to respond) and Germany indirectly (after Munich, he sent Neville Chamberlain a telegram that read “Good man”) may have addressed the problem of going to war in the 1930s, but it did nothing to address the problem posed by predator regimes.

During World War II, Washington armed Stalin in order to defeat Hitler. It worked, but it also positioned the Soviet Union to emerge
from the war a superpower. Thus, with fascist totalitarianism defeated, a new problem emerged: communist totalitarianism.

The ensuing Cold War with Moscow was a series of crisis-management episodes:

Desert Storm prevented Iraq from controlling much of the world’s oil. But U.S. troops would have to stay behind to protect Saudi Arabia from Iraq. That decision would lead Osama bin Laden to wage a global guerrilla war against America –
a war plotted from a safe haven provided by the Taliban.

By invading Iraq, President George W. Bush aimed to prevent Saddam from using his WMDs, remove a recurrent threat to U.S. interests and plant democracy in the Middle East. But the invasion revealed only the skeleton of a WMD program, had the effect of removing the lid that kept Iraq’s sectarian cauldron from boiling over, allowed Iran to expand its influence and led to America’s bloodiest war since Vietnam.

By withdrawing from Iraq, erasing his “red line” in Syria and resisting calls for no-fly zones to weaken Bashar Assad, Obama aimed to address the political problem of America’s world-weariness. But pulling back from the Middle East triggered a cascade of problems: the rise of ISIS, an unchecked civil war that has claimed 470,000 lives and spawned 4 million refugees, the expansion of Russia’s influence and, ironically, Assad’s use of WMDs.

PROBLEMS AND ALTERNATIVES The purpose of this recap is not to suggest that all of those solutions were wrong. Many of them made sense at the time they were applied. Nor is it to succumb to fatalism and suggest that bad things happen no matter what course Washington takes. Indeed, after absorbing these causes and effects, it’s tempting to conclude that it’s better for America to stay out of the world’s problems altogether. But the past hundred years counsel otherwise – that disengagement allows those problems to worsen and ultimately threaten U.S. interests.

Put another way, ever since 1941, America has conducted a forward-leaning foreign policy – and maintained a military with global reach and global presence – not to look for problems, but to address problems before they explode.

Offering an alternative to the nation-building-at-home caucus doesn’t mean trying to make the world “safe for democracy,” as Wilson declared in 1917, or “ending tyranny in our world,” as Bush declared in 2005. It means having the resources to ensure that America’s democracy can deter the world’s tyrannies (sequestration erased those resources). It means maintaining hard-earned gains by remaining engaged (Obama’s withdrawal from Iraq jeopardized those gains, as does Trump’s suggestion that he would come to the defense of NATO members under attack – an ironclad requirement of the North Atlantic Treaty – only if they had “fulfilled their obligations to us”). It means reminding ourselves that the United States is a force for good in the world (the political rhetoric sometimes suggests otherwise). It means leading the alliance system America built (Obama’s stand-off approach to Libya fell short, as does Trump’s pronouncement that NATO is obsolete).

The defense that Trump and Obama are merely reflecting the world-weariness of an inward-looking electorate may be accurate. However, leadership – especially on matters of national security – is often about persuading the American people to follow a path they would rather not take.

Think about Jefferson abandoning a policy of appeasement and instead waging war on piracy half a world away, and Lincoln transforming the Civil War from a struggle merely to preserve the Union into a struggle to abolish slavery. Consider FDR dragging America back onto the world stage, Truman arguing for open-ended engagement and global containment of Moscow, Reagan reviving the nation’s flagging commitment to what Truman began, the elder Bush building support for Desert Shield/Desert Storm, Clinton wading into the Balkans, and the younger Bush defending the surge.

NO RETIREMENT If the American people want the benefits of a liberal international order that sustains the American way of life, they need to sustain the international order. It doesn’t run on autopilot or grow by magic. It depends on the United States projecting power into the global commons, deterring aggressive states, enforcing international norms of behavior and serving as civilization’s last line of defense. As Anders Fogh Rasmussen, former secretary-general of NATO puts it, “Superpowers don’t get to retire.”

For seven-plus decades, U.S. engagement has prevented great-power wars – the norm between 1745 and 1945. Not coincidentally, U.S. forces have been in Europe since 1944, Japan since 1945, the Persian Gulf since 1948, South Korea since 1950. Today, those who remember Moscow’s concrete walls and iron curtains want America’s help keeping Europe whole and free. And those who fear Beijing’s rise want America’s help keeping the Pacific, well, pacific.

This isn’t charity work or a “bad deal,” to borrow a phrase. In fact, it’s the very opposite.Forging an open trading system connected by open sea lanes, transforming Europe from an incubator of world wars into a partnership of prosperity, planting and nurturing democracies in Europe and Asia, maintaining a stable Asia-Pacific, building a network of alliances – all these are in the national interest. Consider the findings of a RAND study: “A 50 percent retrenchment in U.S. overseas security commitments could reduce U.S. bilateral trade in goods and services annually by as much as ​$577 billion ... The resulting annual decline in U.S. gross domestic product would be $490 billion.”

In short, it’s difficult to see how the United States can prosper in the 21st century by focusing solely on “nation-building here at home,” or by waving the “America First” banner.

Alan W. Dowd is a senior fellow with the Sagamore Institute Center for American Purpose.