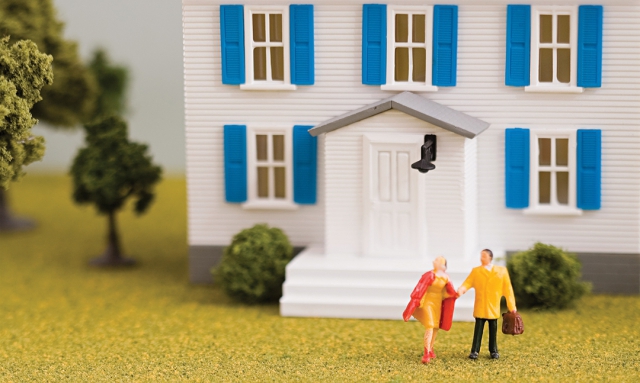 VA loan volume surged in the first quarter of this fiscal year to more than 230,000 loans originated, representing nearly $60 billion in loan value.

This impressive growth is on top of a record year in 2016, in which VA backed more than 700,000 veteran home loans valued at over
$175 billion – a 17 percent increase in aggregate loan value over 2015. VA has supported more than 3 million veteran home purchases in the past five years, resulting in a homeownership rate of 80 percent for veterans compared to 63 percent for the rest of the United States. While this important program has facilitated the American dream of homeownership for millions of veterans, it has also caused financial hardship for many active-duty servicemembers and jeopardized valuable financial flexibility needed to effectively navigate their transition to civilian life.

The original VA loan program was conceived in 1944 as part of a major veteran reintegration program following World War II. In its original construct, the benefit targeted veterans within two years of transition who had served during the war. Since that time, the program has grown significantly in both level of benefit and scope.  The benefits of participating in the VA loan program are significant and include no required down payment or private mortgage insurance (PMI), no minimum credit score required by VA, lower interest rates than market-based mortgage products, and less restrictive borrowing standards that allow veterans to qualify for larger loans and more expensive houses (up to almost $1.1 million in high-cost areas) than their civilian counterparts.

While supporting veteran reintegration through homeownership is a worthy cause, the success of this program has resulted in several significant unintended consequences for the active-duty service population. We have more active-duty servicemembers (who are required to move frequently) buying homes, resulting in more foreclosures or “underwater” situations in which they owe more than their houses are worth. Most importantly, too much exposure to illiquid real estate can impair the financial flexibility required to successfully navigate transition to a civilian career.

A study conducted by LMI found that almost 40 percent of active-duty soldiers owned their own homes, up from 27 percent in 1997. This ownership dynamic is even more pronounced among more senior active-duty leaders, with 63 percent of soldiers with a rank of E-7 and higher owning homes. High rates of homeownership among active servicemembers, and the fixed monthly payments associated with a mortgage, can contribute to financial distress during deployment to combat areas and frequent military relocation. On average, active-duty servicemembers move once every four years, which results in 600,000 moves annually among members of the U.S. Armed Forces. When deployed to combat or relocating often, owning a home can become a burden rather than an asset.

The 2013 FINRA Financial Capability Study’s Military Survey Report offers some daunting statistics regarding homeownership’s potential negative effect on financial security. Thirty percent of military homeowners reported making no down payment, 22 percent reported making late mortgage payments, 38 percent reported owing more on their home than it was worth, and 10 percent had been involved in a foreclosure. While some of the statistics may be influenced by the mortgage crisis of 2007, homeownership for active military is likely to be a mediocre investment when considering hidden costs such as being an absentee landlord, VA funding fees, taxes, maintenance and brokerage fees. Solely from an investment perspective, active servicemembers are better off delaying the purchase of a home and allocating that capital to a diversified, low-cost investment portfolio that offers a greater expected return with more flexibility and liquidity.

However, the greatest problem with active-duty homeownership is not the investment merits, but the lack of flexibility it causes. Servicemembers have unique circumstances that impact their financial choices: 83 percent of veterans will make a mid-career transition, and approximately one-third of transitioning veterans take six months or longer to find employment after service. They are more likely to pursue additional education, more likely to have families and dependents, and less likely to have a well-established professional network at time of separation given frequent relocations while in service. All these factors increase the need for financial flexibility, and decrease the attractiveness of owning a long-term asset like a home and the fixed mortgage payments that come with it. Financial flexibility should be viewed as a critical asset that allows veterans the time required to find attractive employment by using their savings to support themselves and their families during transition.

The VA loan program is a great tool to help veterans transition after service, but it can be a liability for those who use it while on active duty. Veterans should maximize liquidity, financial flexibility and preserve their hard-earned VA loan benefit for after service, when they have the time and stability to take full advantage of this tremendous benefit. With a stable career, some contingency savings and a long-term plan, a home purchase with a VA loan – after transition to the civilian workforce – is not only a great source of enjoyment, but likely a good investment as well.

Douglas P. McCormick is a former Army infantry officer, Harvard Business School graduate and author of “Family Inc.: Using Business Principles to Maximize Your Family’s Wealth” (Wiley). He serves as chairman of Bunker Labs and a member of Team Red, White & Blue’s board of directors.