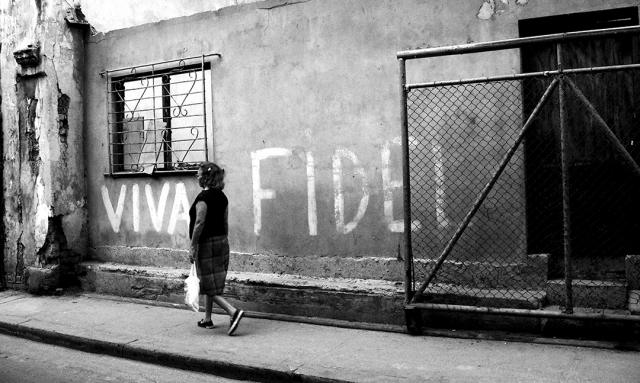 He outlasted 10 presidents. He defiantly and relentlessly stood up to Washington. He nearly pushed the superpowers to war. He fomented and supported revolutions from the Americas all the way to Africa. And despite – or perhaps because of – all this, he became an international celebrity, a larger-than-life icon, a darling of the left and all those who rightly thundered against the excesses of anti-communist dictators like Batista and Somoza and Pinochet, but never failed to rationalize or defend the brutal records of communist dictators like Fidel Castro.

Castro is gone, but his cult lives on.

VIOLENCE There’s a lot to the history of U.S.-Cuba relations that predates Castro – too much to recap here. Suffice it to say that America’s record in pre-Castro Cuba was mixed. On the plus side, the American people were appalled by Spain’s brutal treatment of Cuba. So they intervened “to put a stop to intolerable conditions in Cuba,” as Theodore Roosevelt explained, by helping the Cuban people stand up a constitutional democratic government. But it wasn’t a fully sovereign government, which brings us to the minus side of the ledger. The Platt Amendment allowed and encouraged U.S. interference in Cuba’s internal affairs, and that led to U.S. support for some unsavory regimes in Havana, including military strongman Fulgencio Batista, who was Cuba’s kingmaker/king for some 30 years.

After winning power legally and then giving it up freely, Batista led a coup in 1952. For the next several years, he did all the things petty dictators do: suspended the constitution, used the police and army to control the opposition, imprisoned political opponents, censored the press and enriched himself.

In 1959, Castro and 9,000 guerrilla fighters took Havana, as Batista slipped away with $300 million into permanent exile. A year later, Castro
nationalized U.S. businesses in Cuba. By 1961, he had officially aligned himself and his revolution with the Soviet Union. After that, he survived uncounted assassination attempts, an invasion by CIA-backed counterrevolutionaries, a Soviet missile buildup – and a U.S. response – that nearly turned Cuba into ground zero for World War III, the collapse of the Soviet empire (propping up Castro cost Moscow $12 million a day), and decades of economic, political and diplomatic isolation from the United States.

To get a sense of how single-minded Castro was in his hatred for the United States, it pays to recall that he proposed – in the words of Soviet leader Nikita Khrushchev – that “we be the first to carry out a nuclear strike against the enemy’s (America’s) territory.”

Khrushchev’s response: “Dear Comrade Fidel Castro, I find your proposal to be wrong.” He reminded him of something the Cuban dictator hadn’t considered or didn’t much care about: “Cuba would have burned in the fires of war.”

A month after the missile crisis, when the Soviets informed Castro that they had – unbeknownst to Washington – deployed tactical nuclear weapons on the island, his fuming reaction to the deal that defused the crisis convinced Moscow to remove all nuclear weaponry from Cuba.

Despite his disappointment with Khrushchev, Castro never stopped doing Moscow’s bidding. Castro deployed 50,000 soldiers to Angola to support Soviet efforts there. He sent 10,000 troops to Ethiopia, thousands to Libya, Algeria and Mozambique, and specialized units to Saddam Hussein’s Iraq and Soviet-occupied Afghanistan. More Cuban advisers and aid would flow into Nicaragua and Grenada.

COMPARISONS In a 1957 manifesto, Castro and his followers vowed “to put an end to a regime based on force (and) the violation of individual rights” – a “regime of terror and dictatorship.” They called for “free elections, a democratic regime, a constitutional government ... a free, democratic and just Cuba.”

In 1959, he promised to “solve the substantial social problems of all Cubans in a climate of liberty, of respect for individual rights, of freedom of the press and thought, of democracy, of liberty to elect their own government.”

Yet when he took power, Castro banned political parties and the free press, suspended elections and, as historian Derek Leebaert recalls, ordered machine-gun executions of several thousand opponents “in what his lieutenant Antonio Jiménez termed ‘the year of the firing squad.’”

The killings never ended. University of Hawaii political scientist R.J. Rummel estimated that Castro killed between 35,000 and 141,000 of his countrymen. So much for ending “a regime of terror and dictatorship.”

However, Castro’s actions as dictator came as no surprise to those who knew him as a young man. He was marked by “a violent personality” from the beginning, historian Paul Johnson details. At 20, he participated in an armed invasion and revolution in the Dominican Republic. At 21, he helped organize deadly riots in Colombia that claimed 3,000 lives. That same year, he was in a gun battle with Cuban police and accused of murdering the Minister of Sport, Johnson adds.

As for his promise of individual rights, liberty, and social and economic progress, a report produced by the International Labor Organization in 1957 – two years before Castro’s revolution – noted, “The average wage for an eight-hour day in Cuba ... is higher than for workers in Belgium, Denmark, France and Germany.”

The grim comparisons don’t end there.

The Cuba Castro built ranks 178th out of 180 on the Heritage Foundation’s economic freedom index, 163rd out of 179 on Heritage’s property rights measurement and 132nd out of 192 on the World Bank’s rule of law measurement. And Castro’s Cuba is relegated to the “not free”
category – among the least-free places on earth – on the Freedom House political-freedom index.

At election time, as Freedom House reports, voters are “asked to either support or reject a single PCC-approved (Partido Comunista de Cuba) candidate” for each seat in the National Assembly. The assembly then selects Cuba’s leader, who has been named Castro for the past six decades.

“All political organizing outside the PCC is illegal, and independent campaigning is not permitted,” Freedom House explains. “Political dissent, whether spoken or written, is a punishable offense, and dissidents are systematically harassed, detained, physically assaulted and frequently sentenced to years of imprisonment.”

When we compare Castro’s Cuba to countries of a similar population size (Tunisia and Rwanda), or countries in the same region (Dominican Republic, Guatemala, Colombia and Chile), or post-authoritarian countries (Poland, Hungary, Taiwan and South Korea), we find that all have enjoyed stronger, more sustained per-capita GDP growth since 1970. Moreover, each and every one of these countries rates higher than Cuba on measures of economic freedom, property rights, the rule of law and political freedom.

Castro’s defenders counter such inconvenient facts by pointing to social indicators like public health and literacy, as if nations have a binary choice between social progress and political, economic and individual freedom. To be sure, Cuba boasts a top-60 life expectancy and a top-10 literacy rate. Of course, Castro’s hagiographers never report that pre-Castro Cuba had low infant-mortality rates and high literacy levels – or that Cuba’s suicide rate tripled during his reign, as The Miami Herald has reported. Moreover, Georgia and Estonia can make the same boasts about literacy and life expectancy. Yet both have top-25 economic freedom rankings and high political freedom rankings.

Indeed, those countries identified above vaulted past Castro’s Cuba economically and politically, precisely because they embraced economic and political freedom, while Castro forced his people to live under his failed political-economic system.

Blaming the U.S. embargo for Cuba’s woes is to engage in denial and projection. Castro’s Cuba was free to trade with other countries, and other countries were free to invest in Cuba. But given Castro’s record of nationalization and confiscation, most concluded that wouldn’t be a very wise investment. And consider this: when Castro was asked in 2010 if his “Cuban model” was still worth exporting, the Cuban dictator was forced to admit that the Cuban model “doesn’t even work for us anymore.” In fact, it never did.

HABITS If he cared about his subjects more than his hold on power, Raúl Castro would have used his brother’s passing in November to learn from the many post-authoritarian success stories that have replaced state control with free markets and free government – and then open Cuba to the world of opportunity that awaits beyond the prison yard of communism.

We can hope for – and should even encourage – a peaceful revolution in Cuba akin to the Velvet Revolution that upended communism in Eastern Europe in 1989. But one searches in vain for a Cuban Havel or Walesa. And just as troubling, the Castro propaganda machine continues to deify itself. By 1989, even the true believers knew communism was dead in Eastern Europe. There was neither cult nor personality to live and die for by then. That doesn’t seem to be the case in Cuba, where the darkness of Castro’s shadow continues to fall.

More than a year after President Barack Obama’s controversial decision to reopen diplomatic relations with Cuba and visit the imprisoned island, the Castro regime has not brought about internal reforms or improved external relations. For example, Cubans are still fleeing their
homeland by the thousands. The Coast Guard reports that the number of Cubans interdicted in fiscal 2016 was the highest in a decade – and 60 percent higher than in fiscal 2015. They’re not fleeing because things have gotten better. As Carlos Ponce of Freedom House reports, in the past decade there have been nearly 18,000 political detainees in Cuba. The regime ordered 6,200 arbitrary detentions in 2015 alone.

Even on its best behavior, the Castro regime can’t help but show its true colors:

As for U.S.-Cuba relations, Obama promised that his trip to Cuba would “bury the last remnant of the Cold War in the Americas.” Yet Russian warships are docking in Havana’s harbor, and Cuba is allowing Moscow to reopen Soviet-era bases. In fact, last October – seven months after Obama’s visit – Russian Defense Minister Sergei Shoigu announced that “talks are underway” with Cuba and other Latin American countries to expand Moscow’s military presence in the region.

A year after taking power, Castro gave one of his marathon speeches and braggingly pointed to an old fortress in rural Cuba: “We have transformed it so that nobody will recognize it now.”

Sadly, what was true of that fortress is true of the whole of Cuba. Fidel Castro turned his island nation into something unrecognizable from what it was – or what it could have been.