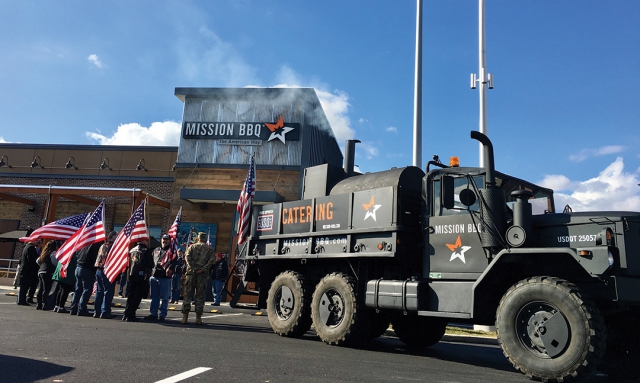 Military-themed restaurants are springing up across the United States, celebrating those who serve our country at home and abroad while giving back to their communities.

Whether locally owned ventures or chain operations like the fast-growing Mission BBQ, the food is important, but the philosophy is equally so.

As Mission BBQ co-founder Bill Kraus says, “It’s love of barbecue, but even more so it’s love of country and wanting to build something that has purpose and meaning.”

Here’s a look at a few U.S. restaurants serving up patriotism and tributes to heroes past and present.

BOMBER RESTAURANT, Ypsilanti, Mich. Thirty minutes from Detroit, this former diner opened in 1936. It became the Bomber in the 1940s due to its close proximity to the Ford-run Willow Run Bomber Plant, which at its peak had 40,000 employees manufacturing one B-24 bomber per hour via Henry Ford’s automotive-style assembly line. Women hired to work at the plant became known as “Rosie the Riveters,” after employee Rose Monroe became an icon of wartime production.

Name variations followed over the years, and in 1986 the restaurant was renamed the Bomber. When Johanna McCoy and Vietnam War veteran John Sebestyen bought the business in 1995, there was “zero military theme,” McCoy says. They wanted to change that.

“A guy came in and asked if we would like to display some of his model airplanes,” McCoy says. “Today we have about 50 hanging from the ceiling, including some models from the Vietnam era and helicopters. Another customer found blueprints for the (Willow Run) bomber plant and donated them. We have them preserved under museum glass.”

Next, people started bringing in photographs of loved ones for display.

“The restaurant is definitely a homage to the local plant, but more importantly it’s about people,” McCoy says. “One lady comes every Sunday. Her dad’s World War II picture is on the wall, and she has breakfast with her dad every Sunday.”

Once featured on a 2003 Food Network show about indulgent meals for its “Bomber Breakfast” (four eggs, two pounds of potatoes and up to 10 pieces of bacon), the Bomber’s line is out the door on weekends. Retired and active military, police officers and firefighters receive discounted meals.

“They served us, so that’s the least I can do,” McCoy says. “We have 12 to 15 ‘Rosie the Riveters’ living in our area, and in 2014 we did a ‘Rosie the Riveter Day’ with free roses for women. The ‘Rosies’ had so much fun they now come for monthly get-togethers. Their stories are amazing.”

Sebestyen passed away in 2011, at 68. McCoy says she wasn’t sure she could keep the Bomber going by herself, but with more than a dozen employees now, the restaurant is still going strong.

57th RESTAURANT, Atlanta Formerly known as Headquarters 57th Fighter Group Restaurant, this eating place near the DeKalb-Peachtree Airport has been around since 1981. It closed temporarily in 2006, but was purchased and reopened by Atlanta pilot Pat Epps in 2009.

“He felt it had history,” says Suzi Hardy, restaurant manager. “It was built as a replica of a bombed-out French farmhouse, and it’s a big restaurant. The main dining room can accommodate 200 people.”

The 57th Pursuit Group was activated in 1941, and following the Pearl Harbor attack flew P-40 Warhawks in defense of the northeastern United States. The next year it was re-designated the 57th Fighter Group and began combat operations, seeing action in France and Italy.

Over the years, the restaurant’s wall of windows has given diners up-close views of private planes and corporate jets taking off and landing. “We have no commercial flights (here), but we’re the second-busiest airport in Georgia,” Hardy says.

In the dining room, patrons don headsets to hear tower talk between pilots and air controllers.  Winston Churchill’s addresses are piped into restaurant bathrooms. As for the menu, Hardy describes it as “casual upscale,” with a focus on fresh food. Signature dishes include beer cheese soup, salmon soufflé and the 57th Sandwich.

“We have a lot of 1940s memorabilia,” Hardy says. “Most of the pictures were donated by family members of the 57th Fighter Group. We have a ‘Wall of Heroes’ in the lounge. Any veteran is welcome to sign it. We had to expand it for new signatures.”

The runway views and atmosphere attract diners and aviation enthusiasts, while veterans enjoy the restaurant’s history.

“About two years ago we had a 91-year-old local man (come in) who was in the 57th Fighter Group,” Hardy says. “He found a picture of himself and said, ‘It’s me!’ Veterans appreciate that we have not forgotten them.”

VETERANS’ CAFÈ & GRILL, Merrillville, Ind. Known for good food and its support of a good cause, Veterans’ Café & Grill opened in May 2014 in the Chicago metropolitan area, about 20 minutes south of Gary, Ind.

A caterer for nearly 30 years, Bessie worked with Marine Corps veteran Brian Cody to provide food for VLCS activities. With the help of VLCS program manager Lorese Wesley, veteran Margie Neuman and others, Veterans’ Café & Grill was born. More than 10 percent of its profits are donated to VLCS.

Bessie and eight employees, many of them veterans, run the café. Veterans get free coffee and free breakfast every Veterans Day. Along with first responders, they also get discounted meals.

Veterans’ Café & Grill has a menu of Southern-style food and is known for its patriotic décor and casual family dining experience.

“They (customers) always thank me for the work we’re doing,” says Bessie, 68. “One parent came in whose son was killed in Afghanistan. We named a burger after him, the Sgt. Leon Hart Burger. It’s emotional to hear people’s stories.”

Until she partnered with her husband in VLCS, Bessie didn’t realize how many veterans struggle with homelessness, she says. Originally from Selma, Ala., she participated in “Bloody Sunday,” which galvanized public opinion and helped lead to the passage of the Voting Rights Act.

“Marching in Alabama helped me realize what freedom was, and I appreciate what veterans have done,” she says. “I’m honored to do what we’re doing to help stabilize them.”

Chef manager and Army veteran Gary Smith, 31, is thrilled by the restaurant’s reviews, saying, “We do work hard, and it makes me feel good. I pride myself on being a veteran ... being part of something like this lured me in.”

Bessie says she’d like to see the business expand so it can hire more veterans. That thought helped inspire the café’s motto: “Helping heroes with a hand up, not a handout.”

MISSION BBQ A venture shared by two Maryland friends – Bill Kraus, a former marketing vice president at Under Armour, and Stephen Newton, a former Outback Steakhouse executive – Mission BBQ debuted on Sept. 11, 2011, in Glen Burnie, Md. Today the franchise has more than 50 restaurants in 12 states, with plans to have 100 locations by 2018.

But Mission BBQ is more than an American business success story, Kraus says. The restaurant chain makes it a priority to recognize U.S. servicemembers, veterans, firefighters, law enforcement officers and first responders. At every location, at noon, employees enthusiastically lead diners in singing “The Star-Spangled Banner.”

“It warms my heart when I think of it,” Kraus says. “We were on ‘Fox & Friends’ (in 2015) and they focused on the national anthem singing. We got a letter from a policeman who saw the show, determined that the closest Mission BBQ was 700 miles from his Indiana home, and he and his son drove a motorcycle to Roanoke, Va., just to have lunch and sing the anthem. Who would think the best two minutes of the day are when the cash registers aren’t ringing?”

Outside each Mission BBQ are old military vehicles with barbecue smokers for parades and community events. The restaurants’ walls are covered with photographs and memorabilia from local veterans and first responders. And as a lead-up to Armed Forces Day, Mission BBQ hosts military appreciation days for each service branch, inviting active-duty personnel and veterans in for free sandwiches. On Veterans Day, veterans receive complimentary sandwiches, and on Sept. 11, so do police, firefighters and first responders.

When a new location opens, Mission BBQ introduces itself via fundraisers for local military, police and fire charities. Hundreds of thousands of dollars have been donated to help wounded military members, the USO and other organizations.

“Everything we do is about feeding people and giving back,” Kraus explains.

One of Kraus’ sons, Andrew, served six years in the Marine Corps. Another attended the U.S. Naval Academy. As for Newton, the terror attacks of 9/11 made a deep impression on him. Together, the two friends wanted to turn their love of barbecue into a franchise that pays tribute to uniformed heroes.

Kraus is quick to praise employees (he calls them “teammates”), explaining, “I always say non-patriots need not apply. We like to find people who have this in their hearts.”

At one Pennsylvania location, employee Dana Shearon left her job as a teacher’s assistant to join Mission BBQ after her brother – Gennario “Jerry” Pellegrini Jr., a police officer serving in Iraq with a National Guard unit – was killed.

“We are seeing that in other locations, too,” Kraus says. “It’s amazing the number of our teammates who have friends or family members who are serving. Maybe it helps families heal in some small way. We think it’s high time these folks are thanked.”

Audrey T. Hingley is a freelance writer living in Virginia.