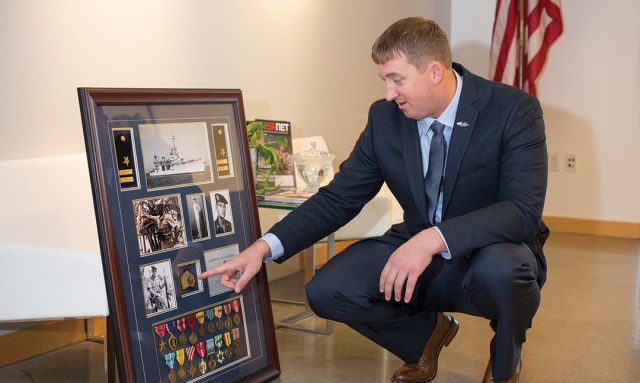 It’s hard to believe how some Purple Heart medals end up in Zachariah Fike’s hands.

They’ve been discovered in abandoned homes, vehicles, furniture, a Walmart parking lot and boxes of stuff dropped off at Goodwill stores. One was lost when it fell off a soldier’s uniform at a Broadway show; another slipped out of a suitcase and was found on a baggage carousel.

One of Fike’s favorite stories is that of Smuckers, a Labrador-golden retriever mix who dug up a Purple Heart in the backyard of his Denver home. The dog’s owners tried to find the family of Army Cpl. Richmond Litman, a Korean War veteran, and eventually turned to Purple Hearts Reunited (PHR) – a nonprofit founded by Fike in 2012 to return lost or stolen medals of valor to veterans and their families. Hearing about it on the news, Litman’s daughter called to claim the Purple Heart. In a graveside ceremony, she received the medal from Smuckers, who wore it on a purple ribbon tied to his collar. “He’s one of the first dogs to not only find a medal but return a medal,” Fike says.

PHR has logged over 100,000 miles to return some 350 lost medals, including Litman’s. Working with Fike to make it happen are hundreds of volunteers: those who help present medals to families (Valor Guard), people who track them down (Valor Research), and those actively looking for lost medals online and in pawn or antique shops (Valor Rescue). “It’s a collaborative effort,” he says. “Without this team, PHR would not exist.”

On Aug. 7, the foundation will mark Purple Heart Day in New York City by returning eight medals to descendants of veterans from World War I, World War II, Korea and Vietnam, as well as an Iraq veteran whose awards were misplaced. Later in the month, PHR will head to the American Legion Auxiliary’s convention in Reno, Nev., to present to a Marine combat veteran his great-grandfather’s World War I Purple Heart.

“That doesn’t happen often,” Fike says. “He has kids, and this is something he can pass on to them. It’s a pretty special return.”

A major in the Vermont National Guard and Legionnaire, Fike has a special appreciation for the sacrifices made by Americans in uniform. He traces his lineage back to the Revolutionary War, with ancestors serving in every major U.S. conflict since then. His grandfather was a combat engineer in World War II, his father went to Vietnam, and both his parents were drill sergeants. Fike enlisted at 17, and has deployed to Iraq and Afghanistan, where he was injured in a rocket attack in 2010 and earned his own Purple Heart.

Prior to that, though, a Green Beret buddy got Fike hooked on hunting antiques. “I found it kind of therapeutic, trying to find these lost treasures,” he says. “As I started to venture into these shops, I’d see discarded military items – uniforms, helmets, medals. And it broke my heart, because I come from that long line of military tradition. I didn’t see some random soldier in those items. I saw my grandfather or my father. I couldn’t let them sit there, so I became a collector.”

His mother, looking for a Christmas gift along those lines, bought Fike the posthumous Purple Heart of a World War II soldier. Pvt. Corrado Piccoli was from Watertown, N.Y., where Fike was living, and was killed in France in 1944. A Google search turned up little else.

“There was no photo, no history, no description of who he was,” Fike says. “It sent me on a journey to find out everything I could about him.”

After months of research, Fike located Piccoli’s descendants – and what he thought would be a simple medal return reunited a devastated family.

“It made national news,” he says. “After that broadcast, I started receiving literally thousands of phone calls from all over the country from people who had these medals and needed help. We haven’t looked back since.”

Half the medals PHR receives are what Fike calls “donations,” sent by people who found them but don’t know how to track down the family of the recipient. The other 50 percent are, unfortunately, sold and traded.

“The average posthumous medal on the market today goes for between $300 and $500,” Fike says. “If you add historical significance to it – a famous battle, a famous unit, a high-ranking official – they can go for thousands of dollars. I can’t stand to see the medal of a serviceman who gave his life for us used to make money. So we rescue a lot of them.”

Once a medal arrives, its case is assigned to a volunteer researcher, in the hope that a family member can be found. Where that’s impossible, PHR arranges for the medal to be housed at a historical society, town hall or other venue.

“We think it needs to be with the family or in a home of honor, not a personal collection,” Fike says.

Some returns are an intimate gathering, in a living room or at an American Legion post; others are a public event, with a stadium crowd of 30,000.

PHR’s upcoming “Eight on the Seventh” event will take place at Federal Hall in New York, where George Washington – founding father of the Purple Heart – was sworn in as the first U.S. president in 1789. Medals to be returned include:

Dunnell’s medal is part of PHR’s special effort to return lost World War I Purple Hearts during the war’s centennial. In Reno, Fike will present the Purple Heart of Army Pfc. Joseph James “Jack” Cryan to the soldier’s great-grandson, Steve Cryan, a Marine Corps veteran of the Iraq War – and a Purple Heart recipient himself.

“It’s pretty cool,” Steve Cryan says. “I have all my medals in a display box, and I can put this next to them. It’s shocking they’ve gone to such lengths to make sure the medal gets back to our family. I can’t even describe it.”

Jack Cryan served with Battery D of the 53rd Artillery, Coast Artillery Corps, and was wounded when the enemy shelled his camp April 28, 1918. After the war, he worked as a molder in an iron foundry and died in 1956.

How Cryan’s medal went missing is a mystery, like so many of the Purple Hearts that PHR rescues or receives in the mail. Ultimately, Fike accepts that we’ll probably never know – but that maybe these things happen for a reason.

He remembers making a call last year about a medal that had been turned in, and was startled to discover it belonged to his dad’s neighbor.

“Every medal has its own journey, and it makes you wonder how many times it’s changed hands,” Fike says. “How did it get in that backyard where that dog dug it up? How did it get in the rafters of this house? It’s an amazing journey of lost valor, and it always seems to find its way to us and back to its home. I’ve seen so many things that make no sense or are just out-of-this-world unbelievable. Nothing surprises me anymore.”