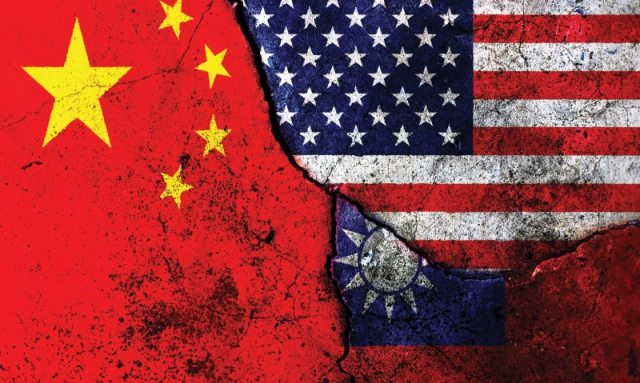 Just weeks before he took the oath of office, President Trump raised eyebrows in Washington (and temperatures in Beijing) for daring to take a phone call from President Tsai Ing-wen of Taiwan. For Beijing, this shook the all-important status quo that keeps a tenuous peace in the Taiwan Strait.

Setting aside the irony that it’s not appropriate for the president to talk with the democratically elected leader of one of America’s biggest trading partners – but somehow appropriate for him to meet with Kurdish leaders who plan to declare their
independence from Iraq, or for the White House to host the leader of Scotland who’s intent on pulling her nation out of the United Kingdom, or for the president to talk with leaders from Iran and Cuba who embrace a virulently anti-American creed –
the episode reminds us that Taiwan remains what it has been since 1949: a flashpoint for tensions between the United States and the People’s Republic of China (PRC).

THE BIG PICTURE The phone call and Trump’s defense of it – “We can sell them $2 billion of the latest and greatest military equipment,” he matter-of-factly observed, “but we’re not allowed to accept a phone call?” – suggest that the new administration is ready to rewrite Washington’s decades-old playbook for dealing with Taiwan and mainland China. Indeed, contrary to initial claims that Trump had blundered his way into a major foreign policy gaffe, the fact that the call was “the product of months of quiet preparations and deliberations among Trump’s advisers about a new strategy for engagement with Taiwan,” as The Washington Post reported, suggests the administration is looking at the big picture in the Asia-Pacific region.

The big picture tells us that Beijing is doing far more to upset the status quo than any phone call. Take, for example, the PRC’s recently released military strategy, which vows to “safeguard the unification of the motherland,” describes “the Taiwan issue” as key to “China’s reunification and long-term development” and declares “reunification ... an inevitable trend in the course of national rejuvenation.”

These are worrisome words. First, Taiwan has never been ruled by the PRC, which explains why 64 percent of Taiwanese oppose unification.

Those who try to explain this away as a legitimate reaction to the Trump-Tsai call seem unable to discern the difference between a telephone and 15,000 tons of maritime military power (along with a package of nuclear-capable bombers). Moreover, they forget that in June 2015, long before Trump and Tsai were elected, Beijing practiced amphibious operations aimed at Taiwan.

Third, a 2016 Pentagon report concludes that the PRC is focused on “preparing for potential conflict in the Taiwan Strait” and “continues to develop and deploy military capabilities intended to coerce Taiwan or to attempt an invasion, if necessary.” Indeed, the PRC-Taiwan order of battle suggests there wouldn’t be much of a battle:

Mustering the best defense it can in light of its untenable geopolitical situation, Taiwan is deploying indigenous anti-submarine and anti-ship missiles. Taipei has expressed interest in acquiring modern F-35Bs and F-16C/D variants, but those hopes have been dashed by Washington’s tilt toward Beijing. Yes, the Obama administration authorized in 2015 a
$1.83 billion arms package for Taiwan (including frigates, anti-aircraft weaponry, anti-tank missiles and anti-ship systems). But it’s telling that while Egypt’s autocrats get advanced F-16s and the not-so-friendly government of Turkey gets high-tech F-35s, Taiwan’s pro-U.S. democracy gets delays and what one defense analyst calls “1970s technology.”

Perhaps worse, by 2015 four years had elapsed since the White House had authorized an arms delivery to Taiwan – “the longest period since the passage of the Taiwan Relations Act (TRA) in 1979” without such a delivery, as Sen. Ben Cardin, D-Md., and Sen. John McCain, R-Ariz., noted.

Taiwan also needs to help itself by investing in its own defense. Taiwan spent 2.9 percent of its GDP on defense in 2001, but today invests just 2 percent there.

Beijing isn’t reciprocating. Between 2011 and 2015, it increased military spending 55.7 percent – and another 7 percent last year.

For the United States, Taiwan’s position has eroded from being an ally – “an unsinkable aircraft carrier,” in Gen. MacArthur’s words – to an irritant. Thus, instead of a clear commitment of protection, which the likes of Slovenia and Albania now enjoy, Taiwan is left clinging to the murky TRA, which seems more an exercise in obfuscation than reassurance.

The TRA declares that “any effort to determine the future of Taiwan by other than peaceful means” would be a “grave concern to the United States,” commits the United States to provide Taiwan “arms of a defensive character,” and pledges that America will maintain “the capacity ... to resist any resort to force or other forms of coercion that would jeopardize the security, or the social or economic system, of the people on Taiwan.”

As a result, neither side of the Taiwan Strait knows exactly what Washington would do in the event of war. This policy of “strategic ambiguity” may have served a purpose in the past, but it’s a recipe for disaster today, especially given how Beijing and Taipei view the situation.

Beijing considers Taiwan the PRC’s 34th province, which will one day – one way or another – be absorbed by the mainland. As Gen. Xu Caihou of
the PRC’s Central Military Commission ominously noted in 2009, “China has yet to realize complete unification.”

Moreover, Beijing sees Taiwan as a challenge to its authority. Taiwan’s determination to stay independent from the mainland is “a humiliating rejection of Beijing’s Asian centrality by an undeniably Chinese people,” Robert Kagan of the Brookings Institution explains. “If Taiwan will not accept China’s
leadership in East Asia, who else can be expected to?” In short, Taiwan’s status is a matter of national pride and international legitimacy for Beijing.

Taiwan sees itself as separate and distinct from the mainland. Indeed, 60 percent of the people of Taiwan identify as “Taiwanese” – not Chinese. Tsai, whose party has advocated independence, calls Taiwan “a sovereign independent country.” Even so, Tsai has struck a cooperative tone, saying she is “committed to maintaining the cross-strait status quo.” But she warns, “We will not succumb to pressure from China.”

Tsai’s words remind us that, no matter the history and no matter Beijing’s plans, the reality is that Taiwan is a self-governing democracy today. It will not negotiate away its de facto independence, and it will not allow itself to be absorbed by force or incorporated by coercive policies.

If Washington remains ambiguous about Taiwan, what’s to stop Beijing from giving Taipei an
ultimatum? And just as worrisome, what’s to stop Taipei from declaring independence – and thus forcing a test of wills with the mainland?

DOCTRINE FOR PEACE The good news is that Washington seems awake to the challenge.

Trump endorsed and ran on a platform that declared, “We oppose any unilateral steps by either side to alter the status quo in the Taiwan Straits ... (A)ll issues regarding the island’s future must be resolved peacefully, through dialogue, and be agreeable to the people of Taiwan. If China were to violate those principles, the United States, in accord with the Taiwan Relations Act, will help Taiwan defend itself.”

Also, the defense bill President Barack Obama signed into law in December 2016 urges the
Pentagon to “carry out a program of exchanges of senior military officers and senior officials between the United States and Taiwan ... to improve military-to-military relations.” The law calls for the exchanges to focus on “threat analysis ... military doctrine ... force planning ... logistical support ... (and) operational tactics, techniques and procedures,” authorizes the exchanges to be conducted “in both the United States and Taiwan,” and authorizes the participation of U.S. general/flag officers.

Even so, more can be done to keep the peace in the Taiwan Straits. Even a brief war between Taiwan and the PRC would cut off Taiwan and its 24 million people from the world. It would directly affect America’s largest and 10th largest trading partners, smother $198 billion in annual Taiwan-PRC trade and disrupt the $5 trillion in trade that transits the South China Sea annually. Worst of all, allowing Beijing to absorb Taiwan without the consent of the Taiwanese people would leave a stain as ugly as Munich.

In short, the time for “strategic ambiguity” has given way to a time for clarity. Washington’s goal should be to preserve Taiwan’s security, to prevent Taiwan from turning its de facto independence into de jure independence, and to persuade Beijing that pursuing any alternative to the status quo would threaten U.S. interests. The only unification the United States should countenance is one initiated by Taiwan – and reflecting the will of its people.

But words are not enough when dealing with dictators. As long as Taiwan remains committed to a peaceful status quo, it deserves all the weapons systems necessary to defend itself – delivered on a routine, predictable and transparent basis – and a clearer security guarantee from the United States.

The ambiguity that characterizes the TRA could lead to miscalculation, which has often led to war in the past. The antidote, as we learned after World War II, is clarity plus strength. As former Sen. Richard Lugar, R-Ind., one of the most respected statesmen of his generation, has argued, “It is imperative that we make credible our commitment to assist Taiwan if China uses force to unify the island to the mainland. The credibility of our commitment will determine the validity of our deterrence.”

Regrettably, the credibility of America’s military deterrent is increasingly in doubt. By definition, naval power is a prerequisite for deterrence in a maritime domain like Taiwan’s neighborhood. But sequestration has hacked away at U.S. maritime capabilities:

This is the best way to invite the worst of possibilities: what Churchill called “temptations to a trial of strength.” A wiser, safer course is to rebuild America’s deterrent military strength.

In 2015, two days after Beijing flew bomber aircraft near Taiwan’s airspace, a pair of Marine Corps F-18s landed in Taiwan – the first such landing in 30 years. The U.S. military said the unexpected visit was due to “a mechanical issue.” But given the timing, it seems the Pentagon was sending a message: Taiwan is not alone.

With enough window dressing to allow Beijing to save face and enough substance to underscore America’s ability to project power, this is the kind of signal Beijing understands. But without a clearer commitment to Taiwan’s security and a stronger military deterrent, Washington’s signals will grow weaker – and democratic Taiwan’s future more precarious.