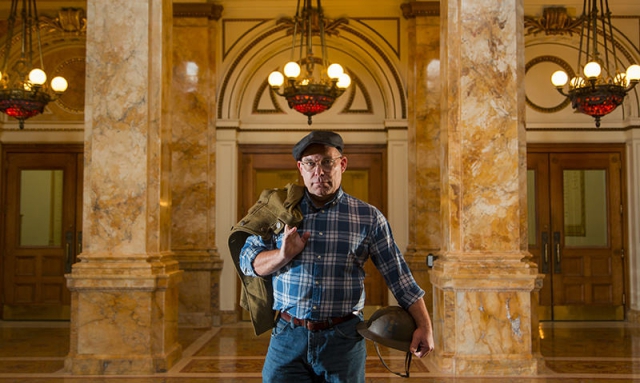 They’re called the “U files” – burial cards or records for the unknowns interred in U.S. World War I cemeteries overseas.

Each one has a number and specifics about the remains, including where they came from and where they went. Unfortunately, the U files were catalogued multiple times and moved around in the decades after the war, and have yet to surface. But if Robert Laplander can locate them, he’ll know the final resting place of Army Pvt. Eugene McGrath and possibly other fallen Americans.

An author and expert on the Lost Battalion, Laplander has been on McGrath’s tail for years. In 2001, one of the soldier’s dog tags turned up at the site of the battle, and Laplander wanted to learn what happened to him.

It turned out McGrath was killed by shrapnel on Oct. 5, 1918, as elements of the 308th Infantry, 77th Division, were surrounded in the Argonne. His body was in a foxhole for three days before relief arrived. From there, it gets confusing.

McGrath was buried in grave 43 (later 87) in a temporary cemetery. No dog tags were affixed to the cross at the foot of the grave, but it did bear McGrath’s initials; somebody knew who he was. Unfortunately, the cross was separated from McGrath’s remains when bodies were transferred to a permanent cemetery the following spring.

“In February 1919, the McGraths sent a letter to the government asking what happened to their son,” Laplander says. “The government was forced to admit it didn’t know where he was, and later said that even though they had not managed to identify a set of remains, they were almost positive he was in one of the unknown graves at the Meuse-Argonne American Cemetery in France. The family simply had to live with that.”

Long story short: the U files likely include a cemetery address – block, row, grave number – for the remains removed from temporary grave 43/87. Find the U files, find McGrath.

‘THEY FOUND HIM’ To get this far, Laplander has had the help of cemetery officials, archivists and volunteer researchers on both sides of the Atlantic. Hopeful that together they’ll solve the McGrath case, he’s opening others, too, for a project he calls Doughboy MIA.

“What we wanted to do originally was commemorate the individuals missing from the first world war,” he says. “People tend to talk about the 116,000 who were killed, failing to realize that 4,423 of those are missing in action, lost or buried at sea. Our motto is, ‘A man is only
missing if he’s forgotten.’ And these guys have been forgotten for a long time by the public at large.”

In May, Doughboy MIA had its first success, winning overdue recognition for one of America’s earliest casualties. Barely a month into the war, Navy Seaman Herbert Renshaw of Salisbury, Md., drowned when rough seas knocked him off the deck of the sub tender USS Ozark, where he’d been signaling another ship.

“The fact that young Renshaw was the first Maryland boy to give his life for his country will not be overlooked, and his memory will be kept among the records of the Navy Department,” the Wicomico News reported.

Renshaw’s name appears on local memorials  but wasn’t among those compiled by the War Department and maintained by the American Battle Monuments Commission (ABMC). Stephen Gehnrich, a professor at Salisbury University and World War I history buff, contacted Laplander about the omission. After digging, Doughboy MIA petitioned ABMC to add Renshaw’s name to the Tablets of the Missing at Brookwood American Cemetery in England, where most of the war’s naval casualties are listed.

“I’m so happy they found him,” Renshaw’s niece, Gail Renshaw Blackwell, told History.com on the 100th anniversary of his death. Her father also served in World War I, fighting at Alsace-Lorraine. “It’s wonderful for me, and I know my daddy would be really proud.”

Doughboy MIA has brought attention to one of the last Americans to enlist during the war, too. August Fritz Weber of Seguin, Texas, joined the Army on Sept. 4, 1918, and was en route to the Panama Canal Zone when he fell off his transport and was lost at sea. Like Renshaw, Weber’s name wasn’t on the official rolls. But because he wasn’t attached to the American Expeditionary Forces and died outside a designated war zone, he’s ineligible to be added to the Tablets of the Missing.

Even so, Laplander took the case to ABMC, which plans to add Weber’s name at Corozal American Cemetery in Panama.

“It’s so important to remember these fellows,” Laplander says. “They went and they did their jobs, and they lost their lives. Nobody who does that should be forgotten.”

‘LUCKILY THERE’S US’ As a boy, Laplander enjoyed reading about America’s flying aces and other war exploits. He later joined the Marine Corps and pursued a career in music but never lost his interest in the Great War.

Twenty years ago, he went into a used bookstore in Milwaukee and bought a history of the 77th Division in World War I. “I spent the next couple of days with the 77th, training at Camp Upton and on the Vesle and in the Baccarat sector and then in the Argonne,” he recalls. “After I read the story of the Lost Battalion, I had questions.”

Laplander used the Internet, still in its infancy, to learn all he could about the 700 men trapped behind enemy lines in the final weeks of the war, only 194 of whom came out unscathed. The more he read, the more he wanted to know, “and it kind of snowballed from there,” he says. “I had this giant pile of information and thought, ‘I should write a book on this.’”

He published “Finding the Lost Battalion” in 2006, and has updated it for the Great War’s centennial. The connections Laplander made while researching the book led to his pursuit of McGrath – and a deep desire to do right by the war’s missing Americans.

He’s talked to family members who remember visiting the home of an aunt or a grandmother but were forbidden to ask about the photo of a soldier or sailor on the mantel. The pain of losing a loved one in war is one thing; the pain of not knowing that person’s fate is something else entirely.

“Killed in action is a fact,” Laplander says. “It’s finite. It’s incontrovertible. Missing is different. Missing is a cruel hope floating over a sea of despondency threatening to sink at any time but never does.”

Concluding it had done all it could to locate missing servicemembers and identify unknowns, the U.S. government shut down investigations in the early 1930s. Only 26 Americans have been recovered in the decades since; in essence, World War I is considered a closed book.

“The Defense POW/MIA Accounting Agency, the DPAA, does a phenomenal job, but its mission only goes back to World War II,” Laplander says. “Luckily for everybody, there’s us.”

He believes there’s room for a fuller accounting, and points to the Renshaw and McGrath cases as examples of what can be done. Between 1919 and 1924, the Graves Registration Service (GRS) processed 80,000 burials – “a crazy amount,” he says, “and they did it all with shoeboxes full of index cards and paper forms. The fact that only 4,000 of these guys are missing is a testament to the good work they did. Did some things get mixed up? Yeah. Were there paperwork errors? Sure. We have errors in coding now with computers.

In some cases, Doughboy MIA’s work might even lead to remains recovery. Laplander is looking at the file of a 1st Division soldier whose body wasn’t located when GRS looked in 1919, and again in 1926. The chaplain who buried him in a German trench initially provided coordinates that were nowhere near where the fighting occurred; later, he marked on a map where he thought it happened, but the new coordinates were a kilometer and a half north and east of his original description.

A battlefield interpreter on Laplander’s team lives in the Netherlands and visits the Argonne frequently. He has walked the ground, report in hand, and located the area the chaplain described. “All the landmarks are there, very little has changed, and he believes he found the trench,” Laplander says.

The next step is to use metal detection or ground-penetrating radar, but to do that, Laplander will have to file forms with the French government and obtain permission from the landowner. “We have to be sure – and I mean really sure – that we’re in the right spot,” he says. “We’ve got a couple more reconnaissance missions to do before we prepare anything, and then somebody has to pay for it.”

Up to this point, Doughboy MIA has been funded mostly through Laplander’s efforts. “We get donations here and there, but it’s nothing compared to what we need,” he says.

With Doughboy MIA becoming an official nonprofit associated with the U.S. Foundation for the Commemoration of the World Wars, there’s a greater opportunity to raise funds. Then they’ll really gain traction, says Laplander. He’s optimistic that Doughboy MIA can add a few brass rosettes to names on the Tablets of the Missing – a notation that a person has been found and identified.

“Is the possibility there?” he says. “Yeah, it’s there. If we do our work carefully and use the technologies we have at hand today, I think there’s every possibility we can recover remains from the battlefield. Will we recover a lot? Probably not. But I don’t think the number matters. I think the effort is what matters.”

‘THEY GAVE EVERYTHING’ As a partner of the U.S. World War One Centennial Commission, Doughboy MIA has a corner on the commission’s website where it posts the latest news on cases. Even the smallest win counts – for example, figuring out there weren’t two missing Marines named Thomas McDonald, one from Idaho and one from Iowa. There was only one, from Iowa. That’s one less missing man.

“This isn’t about publicity,” Laplander says. “It isn’t about anything but finding these guys and commemorating them. We’re in a unique window here where we can gather all this information. We might not be able to do it in another 100 years. It might be too far gone.”

He encourages family members and anyone else who might have material on a missing World War I servicemember, including photos, to contact Doughboy MIA online or join its Facebook group. All of it goes into a permanent database and, where possible, points Doughboy MIA in the direction of identifying a grave or even recovering remains.

“These men lost their lives in the first conflict where we sent a major overseas expeditionary force to fight not for land or gold but an ideal,” Laplander says. “It’s something we just accept today, but at that time, it was a completely new concept, and the American public really got on board with it. We honored them by putting names on their graves wherever we could, and when we couldn’t we put their names on walls. To continue what they did in the 1920s is, I think, a noble endeavor.

“They gave everything. This is the least we can do.”

Visit Doughboy MIA’s webpage for a complete list of U.S. servicemembers missing from World War I, active cases, recoveries since 1934 and more.