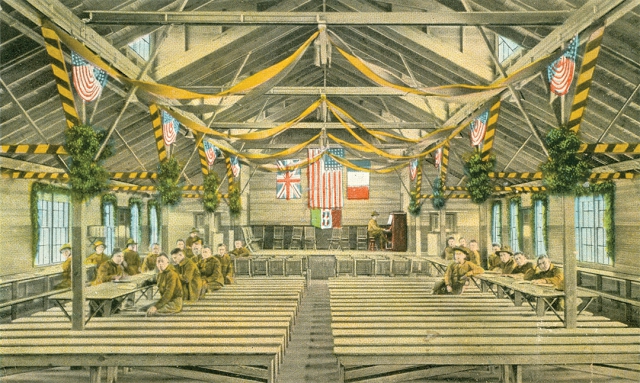 Once the United States entered World War I in 1917, names in the newspapers and on the moving picture rolls became part of the American lexicon: the Western Front, Prussia, Alsace-Lorraine and Flanders, among others. Battlefields like the Somme, Verdun and Ypres stirred the imagination and stoked the fears of many. Australians, New Zealanders and Serbs traveled across the country training the rookies. Doughboys would be transported to Brest,

France, reviewed by King George V of England, discover the Meuse River and die as far away as Murmansk, Russia.

The Navy patrolled the East Coast for German submarines, called U-boats, and protected the waters around Gibraltar and Corfu. Atlantic convoy duty shepherded merchant and transport ships across enemy-infested waters. The Navy sank a German submarine, U-58, off what is now Cobb, Ireland. Floating explosive mines were placed in the North Sea.

In 1917, the world map got a lot bigger for Americans. But those who served overseas took their family and cultural traditions with them, including their celebration of Christmas.

The first mention of the holiday by an American “over there” came from Frederic Coleman, a volunteer serving with the 2nd Cavalry Brigade Headquarters, British Expeditionary Force.

“A couple of Somerset (infantry) bandsmen told me a day or so after Christmas (1914) what occurred at Ploegsteert on Christmas Day,” he wrote. “A German bloke had a cornet, and he could play it grand. He just made it talk. The songs and the tunes the cornet feller played seemed more and more like ones we knew. At last came that cornet with ‘Home, Sweet Home’ and nobody could keep still, we all sang – Huns, English and all. As day broke the Somersets saw the Saxons on top of their trenches. Soon they called out, ‘Come over and visit us, we are Saxons.’ No shots were fired. Some of our chaps changed cigars and cigarettes with them Huns and had talks of all sorts of things.”

Two and a half years later, the United States joined the fight, and many thought the war would be over by Christmas. That didn’t happen, though, and doughboys made the most of the holiday wherever they were at. In a letter from France, one soldier described that first Christmas overseas: “Like every other outfit that was well quartered, we had a tree up in the square and presents for all the French youngsters .... Three of my Christmas packages came on Christmas Eve ... smokes and eats and socks and all the things I had been hankering for ever since my arrival.”

Folks at home could send packages to troops overseas as long as they were 3 pounds or less and no larger than 9 inches by 4 inches by 3 inches. Packages were sent free of charge from Hoboken, N.J. Perishable items were discouraged; the most requested items were cigarettes, tobacco, warm clothing items, soap and anti-flea (cooties) powder.

Santa Claus even made appearances among American troops, delivering treats of the season. One YMCA volunteer, Don R. Guthrie, arrived in a full red outfit, complete with a wispy cotton beard and a papier-mâché mask, ironically made in Germany in 1912. His outfit is in the collection of the National World War I Museum and Memorial in Kansas City, Mo.

On Dec. 20, 1918, Stars and Stripes reported that “the Commander-in-Chief of the Army of the United States (President Woodrow Wilson) will be with his troops on Christmas Day. He will take his Christmas dinner in the A.E.F. training area. He will tell them something of his future plans for their welfare and that of the country which they have so well served.”

Army nurse Florence Edith Hemphill, serving with a British hospital, wrote her sister on Dec. 17, 1918, that she bought 12 pounds of chocolate from the American commissary in Paris for her patients for Christmas. “I don’t have any idea when I will be coming home,” she wrote. “Think there will be a change the first of the year, but whether I am sent home or not I don’t know. Would rather like to go on into Germany (with the occupation forces).”

The 1918 Christmas dinner menu for Base Hospital 202, American Expeditionary Forces in Orléans, France, included “roast young turkey, sage dressing, mashed potatoes, creamed carrots, lettuce salad, fruit cake, chocolates, English walnuts and coffee.” This was a far cry from the doughboy’s normal fare of hard tack and coffee or slum (a stew of beef, potatoes, onions and carrots) and dessert of a spoonful of Karo syrup.

During the Allied occupation of Germany following the armistice, American troops in Coblenz raised a Christmas tree in front of the government building. Covered in long strands of lights, it brightened the area after dusk. As live music entertained the large crowd of soldiers and German civilians, local children received paper trumpets and other goodies pulled from soldiers’ pockets. For the first time in years, the windows were lit, and a lighted cross was placed on top of the building.

In a letter dated Dec. 24, 1918, Sgt. 1st Class Charles Stevenson of Company A, 314th Engineers, 89th Division, wrote, “Just a few feet from me are members of a typical German family, throwing up a tiny Christmas tree, decorating it thoroughly in accordance with all respect due to the famed Christmas tree.”

For American servicemen and women in World War I, far from home and hearth, Christmas still managed to bring some joy and peace.

Doran Cart is senior curator at the National World War I Museum and Memorial in Kansas City, Mo.