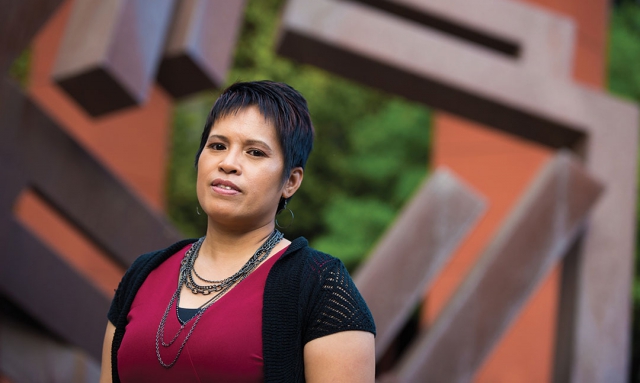 Zeny Stuart saw a bright future when she finished her second hitch with the Army in 2005. The Iraq war veteran earned her Texas real-estate license and became a top seller, earning distinction as rookie of the year. Military-civilian transition? No problem. That is, until Stuart discovered she couldn’t afford to put a roof over her head.

“I never anticipated things would go so far south,” Stuart says. After the economy tanked and her career stalled, she moved home to Arizona only to have the Tempe house she was living in go into foreclosure. She couldn’t find a place cheap enough to rent on her own. “When I fell,” she says, “I fell really, really hard.”

Shelter became her primary obsession. The emotional cost was significant. “There were feelings of dejection, of not living up to your potential,” Stuart says. “There was the uncertainty of not knowing where I was going to land, or how I was going to carve out a professional niche.”

Stories like Stuart’s are more common as the military slashes its ranks and an increasing number of veterans face the challenges of re-establishing civilian lives. There are an estimated 13,100 homeless women veterans in the United States, says Anne Baglio, president of Erie County American Legion (ECAL) Veterans for Veterans in New York state. More than a quarter have children, putting safe and affordable housing even farther out of reach.

HELP ‘NO MATTER WHAT’ The New York project will occupy a former Catholic high school in Cheektowaga, outside Buffalo, and will be one of the largest facilities for homeless women veterans in the region. Veterans for Veterans and its partners plan to transform half of the Villa Maria school into 54 living units, says Baglio, a member of Concord American Legion Auxiliary Unit 431 in Springville. There will be a common kitchen, dining room and access to the campus fitness facility. Veterans for Veterans is seeking permission to name the center in honor of two women veterans from western New York; one died in Vietnam and the other in Iraq.

Counselors will be on hand to help the residents deal with any number of issues.

The Felician Sisters, who live in the other half of the school, will provide day care for women veterans’ children. There is easy access to schools for teens and older children. The Buffalo VA Medical Center, vocational rehabilitation and other services important to helping former servicemembers get back on their feet are easily reached by public transit, says Bill Siegel, vice president of Veterans for Veterans and a member of A.J. Jurek American Legion Post 1672 in Swormville, N.Y.

The six-floor housing center will offer a range of options, from immediate access to emergency shelter to permanent supportive housing. The doors will be open to all women veterans, no matter their sobriety or circumstances. “That’s where the counseling comes in,” Baglio says. “We’re there to get them help whatever way possible.”

The Villa Maria effort grew out of ECAL’s Family Project, started by the late Ray Caso Sr. – then Erie County American Legion commander – and Baglio in 2010. They began by collecting and distributing some $56,000 in toys, food, clothing and household items with the help of Legion posts, Auxiliary units, Sons of the American Legion squadrons, Legion Riders, businesses and individuals. Nearly 550 current and former servicemembers and families benefited from the effort.

Raising money for the project remains one of the most formidable hurdles. Veterans for Veterans is tapping every resource from grants to tax credits to fundraisers, like a 5K run that netted $13,000 on the first try and is set to become an annual tradition.

The only lingering regret is that Caso won’t be on hand for the ribbon cutting.

LEGION TRADITION Helping homeless veterans has long been a Legion tradition, and it’s impossible to catalog every example. Notable efforts include the Pennsylvania American Legion Housing for Homeless Veterans Corp., which has purchased seven houses to shelter homeless veterans since it was created in 1988 under the leadership of Past National Commander Ron Conley. The Department of New Jersey has raised nearly $500,000 to help homeless veterans over the past several years in an effort spearheaded by Past Department Commander Bob Looby. Part of that money helped furnish a 44-bedroom facility called Veterans Haven, says Mark Walker, deputy director of the Legion’s Veterans Employment & Education Division.

Donations from a Legion post in Pittsburgh keep a local homeless shelter in mattresses. Meanwhile, hundreds of individual Legionnaires across the country assist homeless veterans with hotel rooms, transportation and apartments, Walker adds.

The American Legion has kept the pressure on Congress to fund HUD-VASH vouchers that cover a substantial portion of the rent for veterans moving off the streets and into apartments. In 2015, national, state and local American Legion officials visited Los Angeles’ Skid Row – one of the largest concentrations of homeless veterans in the country – handing out care packages and offering former servicemembers help connecting to VA services.

In Connecticut, the Legion added 18 apartments for homeless veterans while renovating Jewett City Post 15, under the guidance of Bill Czymr. Several Colorado Legion posts support a transitional veterans center in Colorado Springs called
Crawford House. And in Arizona, past state commander Judi Beischel is working with Veterans First to develop transitional housing in the Phoenix area for female veterans with children.

SAVING GRACE This sort of help was key to Stuart’s survival. A fellow veteran and her husband took Stuart in for eight months and helped connect her to job leads and community resources. Stuart then moved to an affordable housing complex for women veterans, named for longtime Legionnaire and veterans advocate Mary Ellen Piotrowski and run by Veterans First.

“Mary Ellen’s nurturing environment provided the basics of safety, a roof over my head and a built-in community of support with other women veterans,” says Stuart, who spent two and a half years at the facility.

During her transition, Stuart did homeless outreach for the city of Tempe, a job that convinced her that headlines about the issue are often misleading. “The news will say, ‘We have ended veterans homelessness,’” Stuart says. “But I was on the street doing outreach in Tempe and I ran into plenty of homeless veterans.” Part of the reason: scores of veterans, including women veterans, don’t want to ask for help.

Stuart lived in low-cost veterans housing, where she was also apartment manager, for 15 months. She also worked as housing coordinator and caseworker for MANA House, which provides transitional housing for male veterans.

Thanks to the help Stuart received, she not only has regained her self-confidence and self-esteem, she’s landed a day job at JPMorgan Chase. Outside work, she’s building a different real-estate career – one that feels more solid, more meaningful. “Ever since becoming homeless, I’ve become even more laser-focused on being able to provide low-cost housing for veterans,” Stuart says. “I would love to help women veterans – especially veterans with children.”