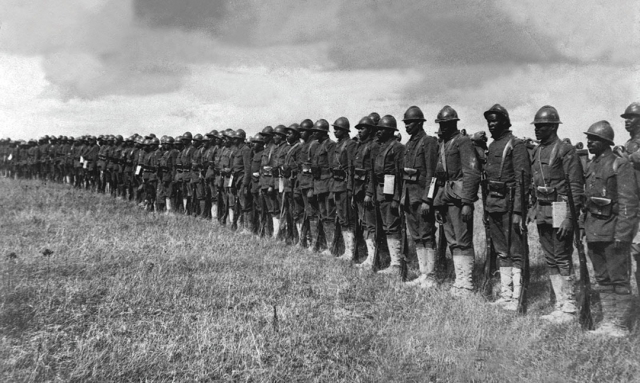 When Delaware artist Edward Loper Sr. was a young man, “there were certain kinds of black men who I admired and they were the kind of black guys who ... came out of the first world war. They had self-respect ....”

Often forgotten today, these veterans were pivotal figures in the modern civil-rights movement who fought valiantly to break down racial barriers within the military and at home. Returning home with their heads held high, they inspired the next generation of black servicemen to continue the struggle against racial discrimination.

Upon the U.S. declaration of war in April 1917, all existing eight black National Guard infantry regiments quickly filled to capacity with volunteers. As a result, over 96 percent of the 367,710 African-Americans who served during the war were conscripted by local draft boards staffed by white men. Blacks eventually formed 13 percent of the wartime Army, even though they represented only 10 percent of the civilian population.

How would the Army use these men? Who would lead them? Alarmed white Southerners sent frantic letters to Secretary of War Newton E. Baker, predicting a future race war if large numbers of black men received military training. For his part, Gen. John J. Pershing, commander of the American Expeditionary Forces (AEF), believed that black men could fight well, but only if led by white officers.

Consequently, over 89 percent of African-Americans were assigned to noncombatant units, mostly in quartermaster and engineer units with white officers. But the black community had some clout to influence official policies – after all, black participation in the war effort was essential. Under pressure from civil-rights organizations, especially the National Association for the Advancement of Colored People (NAACP), the War Department agreed to create one complete black combatant division, the 92nd Division, and melded the National Guard units into four infantry regiments to form a “provisional” 93rd Division. Baker also authorized one black officer training camp at Fort Des Moines, Iowa, to provide company-grade officers for the 92nd Division.

The officer training camp attracted top students from black colleges like Howard University and Morehouse College, men dubbed the “Talented Tenth” by educator and civil-rights activist W.E.B. Du Bois. In October 1917, the Colored Officers Training Camp graduated 106 captains, 329 first lieutenants and 204 second lieutenants. These men knew that white officers would scrutinize their every move, magnifying any error as evidence that black men were incapable of leadership. Indeed, the 92nd Division began the war with 82 percent of its officer corps staffed by African-Americans, but by the end of the war efficiency boards had decreased their representation to 58 percent.

The fates of the 92nd and 93rd divisions differed quite dramatically.

Pershing “loaned” the 93rd Division to the French, who were happy to have Americans bolster their forces. The 93rd amassed an illustrious combat record, fighting in the summer of 1918 in the battles of Champagne-Marne and Aisne-Marne.

The 369th Infantry Regiment, nicknamed the Harlem Hellfighters, served at the front for 191 days, the longest of any U.S. regiment. The 369th secured a critical victory in the opening days of the Meuse-Argonne offensive when it captured a key railroad junction near Séchault on Sept. 30, 1918. Success cost the regiment dearly, however. Horace Pippin (see page 30) was among 851 casualties taken during the assault. The Meuse-Argonne was an American-led coalition campaign, but the 369th had no qualms about fighting in the battle under French command. These men returned home with citations from French generals and Croix de Guerre medals attesting to their bravery and skill.

By contrast, the 92nd Division remained within the AEF, where racism thwarted it at every turn. The division’s 20,000 men trained in seven different locations stateside, hampering its preparation. Training conditions improved in France, but not quickly enough. When the inexperienced 368th Infantry Regiment stumbled at the beginning of the Meuse-Argonne offensive (one of many blunders made by AEF units in the battle’s opening days), the division’s white officers immediately shifted the blame to their fellow black officers. The entire division was subsequently removed from the line until the final days of the war, when it acquitted itself well. Nonetheless, the difficulties of the 368th became the example cited repeatedly in the postwar period to smear the reputation of the entire division.

Yet other memories were taking shape within training camps and French villages, on ships and battlefields. Some black soldiers told their stories only to their families. Others testified publicly in letters and petitions to government officials, black reporters and civil-rights activists. Rather than waiting until they left the Army to begin their fight for civil rights, these stories demonstrated that many African-American soldiers engaged in that struggle from the moment they put on the uniform.

First Lt. Rayford Logan was one such soldier.  Logan began waging his own private war against racism the day he got his commission. Dubbed a troublemaker, when he received a head injury Logan was put behind the lines to supervise noncombatant troops. If Army authorities believed this would silence Logan, they were mistaken. Before long, he was organizing soldiers to demand their rights before courts-martial – thus beginning his lifelong commitment to the civil-rights movement.

Black soldiers found other inventive ways to fight this war within the war. They staged work slowdowns, ignored orders restricting their contact with French civilians, challenged white authority openly, wrote individual letters of protest and signed petitions in collective efforts to better their conditions within the military.

And they told their stories – stories meant to inspire pride and a political awakening.

Nearly every black soldier who went to France could tell a story illustrating French civilians’ kindness, respect and friendship toward African-Americans. “These French people don’t bother with no color line business,” one soldier wrote to his mother. “As for myself, I have never before experienced what it meant to be really free – to taste liberty – in a phrase to be a man,” declared Lt. Osceola McKaine. “I love the French.” For the first time in their lives, they truly felt like Americans.

These stories contrasted sharply with those that detailed the daily harassment and humiliation of serving in a Jim Crow Army. Charles Houston later recounted the moment when he made the decision to dedicate his life to the civil-rights movement. Houston earned a commission as a field artillery officer, and his success mastering a highly skilled curriculum subjected Houston to an even greater amount of what he described as “hate and scorn” from white officers. But it took seeing a once-proud black sergeant, wrongly convicted and sentenced to hard labor, shuffling in chains and under white guard, to convince Houston “that if luck was with me and I got through this war, I would study law and use my time fighting for men who could not strike back.” He chose to tell his story in 1940, on the cusp of another world war, so “this generation of Negro boys may have their eyes opened” before they went off to fight in a war for democracy.

Stories of resistance circulated widely among black veterans from all walks of life. Sgt. Charles Isum, for instance, wrote a detailed letter to Du Bois in 1919, recounting how he had been arrested while attending a wedding hosted by a French family for purportedly violating a divisional anti-fraternization order. Two things made this rather typical experience of racial discrimination noteworthy. First, the entire village had tried to intervene on his behalf. But perhaps most importantly, he had stood his ground in the subsequent legal proceedings and prevailed because “I was aware of my rights.”

Coming home with an honorable discharge, Isum would need all the self-respect he could muster. Civil-rights leader James Weldon Johnson dubbed the summer of 1919 “Red Summer” for the wave of racially motivated assaults that engulfed the United States. Deadly race rioting ravaged 25 cities, including Chicago and Washington, D.C., and a postwar lynching frenzy counted 10 veterans among the victims.

The violence reinforced a rising determination within black communities to fight back, with returning veterans leading the way. Many veterans joined the NAACP, and several became influential leaders within the civil-rights movement. Houston, for instance, went on to devise the NAACP’s legal strategy for challenging segregation in the courts, which culminated in the 1954 Brown vs. Board of Education case that ruled “separate but equal” schools unconstitutional.

Ensuring fair and equal access to veterans benefits was another critical part of the burgeoning civil-rights crusade. Wherever possible, black veterans joined The American Legion – usually as members of segregated posts. Attempting to organize a “colored post” in Baton Rouge, La., a group of black veterans stressed that as Legionnaires they would know “just what the Government is doing for us in the way of benefits for ourselves, our wives, mothers and children.” Chartering decisions were made by the states, however, and some, including Louisiana, refused to sanction black posts. Nonetheless, by 1925, black veterans had successfully established 100 African-American posts nationwide, naming them in memory of comrades listed among the 773 African-Americans killed in action during the war.

In 1940, with another war looming on the horizon, World War I veterans turned their attention back to the military. Houston and Logan joined forces with others to lobby for improved racial policies and expanded opportunities within the military. Forming the Committee on the Participation of Negroes in the National Defense Program, they testified before Congress and petitioned President Franklin D. Roosevelt to prevent a repeat of World War I-era discriminatory practices.

Bowing to their demands, Roosevelt pledged that black men would not be overdrafted or excluded from the air service, paving the way for the creation of the Tuskegee Airmen. The Army had only five black officers (including three chaplains), a result of its repeated claim that commissioning black officers in World War I had been a mistake. Consequently, activists pressed hard to secure a promise from Roosevelt that the military would again train black officers, albeit within a still-segregated military.

The centennial of American participation in World War I offers a perfect moment to remember how the war’s black veterans forged the path that ultimately led to desegregation of the armed forces in 1948. This major victory for the modern civil-rights movement forever altered the meaning of military service. Today the U.S. Armed Forces proudly guarantee equal opportunity to all servicemembers, a legacy of the World War I generation who fought with courage and determination for the right to serve their nation with honor and dignity.

Jennifer D. Keene is a professor of history at Chapman University and president of the Society of Military History. She is the author of several books on U.S. involvement in World War I, including “Doughboys, the Great War and the Remaking of America” “World War I: The American Soldier Experience” and “The United States and the First World War.”

Save
Tags: Heroes to Hometowns, Magazine