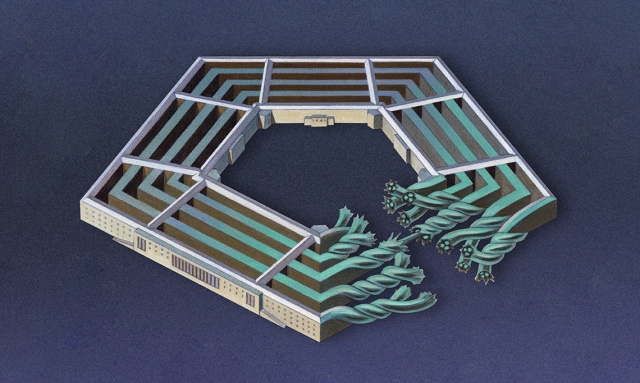 The Budget Control Act (BCA) of 2011 aimed to address the deficit crisis spawned by both the Great Recession and Washington’s efforts to contain it. Those efforts, spanning the end of the Bush administration and beginning of the Obama administration, mushroomed federal spending from $2.98 trillion in 2008 to $3.72 trillion by 2010 – a 25 percent spike in just two years. Washington’s spending binge – along with diminished federal tax hauls due to the recession – created a record-setting $1.4 trillion deficit in 2009. In fact, between 2009 and 2012, the deficit surpassed $1 trillion each year.

As a goad to action, the BCA included a trigger for across-the-board cuts of $1 trillion – spread over several years and divided between defense and certain domestic programs – in the event that a special House-Senate committee failed to meet a deficit-reduction goal of $1.2 trillion. As Defense Secretary James Mattis observes, sequestration was “a mechanism meant to be so injurious to the military it would never go into effect.”

But the committee’s members couldn’t agree on how to reduce the deficit – tax increases, spending reductions, a little of both, a lot of both – and the automatic cuts known as sequestration kicked in.

Did sequestration work? To answer that question, let’s do a cost-benefit analysis on the Budget Control Act – a CBA on the BCA.

“By all measures, the BCA has failed,” Sen. John McCain, R-Ariz., concludes. “A law intended to reduce federal spending has cut defense and other discretionary budgets for five years without decreasing the federal debt.”

Rep. Adam Smith, D-Wash., agrees. Last year, he introduced a bill that concludes, “Sequestration was designed as a forcing mechanism for an agreement on a comprehensive deficit-reduction plan. It has failed to produce the intended results.”

Whatever the fiscal benefits of the BCA, they came at an enormous cost to the U.S. military. Even before the sequester guillotine fell, the Pentagon had cut $487 billion from projected spending, which means the Pentagon would lose nearly $1 trillion in expected resources by the time sequestration had run its course.

Yes, Congress provided Band-Aid spending patches from time to time, and war-operations funding was protected from sequestration. But readiness, training, modernization, maintenance, weapons development and acquisition, and overall deterrent military strength all suffered because of sequestration.

“I can find nothing in the Budget Control Act,” Mattis recently told Congress, “that helps our national security.”

MINUSES Halfway through the sequestration ordeal, the results are not for the faint of heart.

Thanks in large part to sequestration, today’s Air Force “is the smallest and oldest it has ever been,” an Air Force report to Congress grimly concludes.

In 2013, the Air Force stood down 31 squadrons – including 13 combat-coded squadrons – due to sequestration’s funding constraints.

Pressed by sequestration, the Air Force announced in 2014 plans to eliminate 500 planes from its inventory.

Commanders reported last March that they would likely run out of money to pay pilots to fly the last six weeks of fiscal 2017. Military.com adds that the Air Force is making do with “half-size squadrons.”

“The U.S. has not developed a new heavy bomber in three decades,” the Lexington Institute points out. Initial operational capability of the yet-to-be-built B-21 will not come until 2025. Until then, just 12 percent of America’s aging bomber fleet will be able to penetrate and survive enemy air defenses.

In 2011, the Army’s active-duty end strength was 566,000; by 2016, it had fallen to 476,000. The Army’s active-duty force was 480,000 before 9/11. In other words, sequestration left America with a smaller Army in a time of war than it fielded in a time of peace. As then-Army Chief of Staff Gen. Ray Odierno remarked in 2013, "Throughout our nation’s history, the United States has drawn down military forces at the close of every war. This time, however, we are drawing down our Army not only before a war is over, but at a time where unprecedented uncertainty remains in the international security environment.”

Only 25 percent of the Army’s combat aviation brigades are ready to deploy. Worse, of the Army’s 58 brigade combat teams, “only three could be called upon to fight tonight in the event of a crisis,” reports Gen. Daniel Allyn, Army vice chief of staff.

As we enter an era marked by renewed great-power rivalry, the United States needs more of the Army’s unique deterrent capabilities – not less. Indeed, given the demands in Korea, Afghanistan, Iraq and Eastern Europe, it’s no surprise Army Chief of Staff Gen. Mark Milley wants an active-duty force of 540,000 to 550,000 soldiers.

The situation is so dire that, incredibly, Marine aviation units have been reduced to salvaging aircraft parts from museums to keep planes flying.

At the height of President Reagan’s rebuild, the Navy boasted 594 ships. Today’s Navy has only 277 active deployable ships. These numbers aren’t even close to America’s maritime needs.

“For us to meet what combatant commanders request,” according to former Chief of Naval Operations Adm. Jonathan Greenert, “we need a Navy of 450 ships.” A government-funded study concludes the United States needs 14 aircraft carriers (the Navy has 10 operational), 160 cruisers and destroyers (the Navy has 84), and 72 attack submarines (the Navy has 52).

These shortfalls have real-world implications. When the Obama administration ordered warplanes from USS George H.W. Bush to blunt the ISIS blitzkrieg in 2014, Greenert admitted that “they stopped their sorties” over Afghanistan to do so.

Similarly, the Trump administration’s apparent sleight-of-hand with USS Carl Vinson during the North Korea crisis in spring 2017 – trying to make one carrier do the work of two – suggests the United States doesn’t have the carrier firepower it needs to dissuade foes, reassure allies and stabilize hotspots.

While today’s Navy may be more ambidextrous than its forerunners, deterrence is about presence. And the sequestration-era Navy lacks the assets to be present in all the places it’s needed.

RESOURCES Perhaps the biggest cost of sequestration is the message it sent to our troops, who were made to feel like liabilities that needed to be cut down to size rather than precious resources that needed to be nurtured. Their equipment got older, their numbers and assets grew smaller, their deployments became longer and more frequent, and their training and operations became more dangerous.

Surely, the rash of deadly midair and at-sea mishaps is a byproduct of sequestration. “On-duty accidents,” notes the American Enterprise Institute’s Mackenzie Eaglen, “have been the biggest killer of American servicemembers since 2014” – not the Islamic State, al-Qaeda or the Taliban.

Add it all up, and sequestration has had a devastating effect. By shrinking the reach, role and resources of the armed forces, sequestration has caused long-term damage to both the military and the nation it defends.

“No enemy in the field has done more to harm the readiness of our military than sequestration,” Mattis says.

“We have lost our advantage in key warfighting areas,” adds Joint Chiefs Chairman Gen. James Dunford. He warns that “without sustained, sufficient and predictable funding ... we will lose our ability to project power.”

Speaking of funding, the Pentagon is not to blame for the budget-deficit mess. Washington could have eliminated the entire defense budget in 2012 – $662 billion that year – and turned the Pentagon into a mega-mall, and we would still have faced a budget deficit of $700 billion.

The Pentagon accounts for 17 percent of federal spending. Yet it was ordered to cough up half the budget savings mandated by sequestration, which led Sen. Angus King, I-Maine, to point out something too many policymakers fail to grasp: “The growth in the budget right now is in mandatory programs and particularly in health-care costs, Medicare, Medicaid, the children’s health program. That is what is driving the federal deficit. It is not defense.”

PERSPECTIVE The costs of sequestration wouldn’t be all that worrisome if the world was at peace – if China weren’t asserting control over international airspace and waterways; if Russia weren’t reincorporating parts of the former Soviet Union, threatening NATO allies and reasserting itself in the Middle East; if North Korea weren’t testing nukes and long-range missiles; if Iran weren’t ambushing U.S. warships; if ISIS, al-Qaeda and the Taliban weren’t waging war on civilization; and if Russia and China weren’t building up their militaries. Russia’s military outlays have mushroomed by 125 percent since 2006, China’s by 150.9 percent since 2008.

These disparate threats explain why President Trump issued an executive order upon entering office pledging to rebuild the armed forces and directing the Pentagon to determine funding levels “necessary to improve readiness conditions and address risks to national security.” He unveiled a $639 billion defense budget for 2018 ($574.5 billion in baseline funding plus $64.6 billion in special war funding) – well above the BCA’s sequester limits. He has vowed to increase the active-duty Army to 540,000 soldiers, deploy a 350-ship Navy, field 36 Marine battalions and equip the Air Force with 1,200 fighter aircraft.

The 2018 defense budget passed by Congress and signed by the president is $700 billion (baseline and war-operations funding). But one budget cycle is not enough to repair the self-inflicted wounds of sequestration. “It took us years to get into this situation,” Mattis explains. “It will require years of stable budgets and increased funding to get out of it.”

Today, Washington is, in effect, asking America’s military to execute all these missions – to wage a global war on terror, fight open-ended regional battles and prosecute Cold War 2.0 – all at once. Yet according to the Congressional Research Service, federal outlays devoted to defense programs have fallen as a share of GDP in every year since the BCA’s enactment. In 2011, defense outlays were 4.5 percent of GDP; by 2016, they had shrunk to 3.1 percent.

COSTLY SAVINGS As the bipartisan gamble known as sequestration began to take its toll, Henry Kissinger identified the crux of the problem confronting Washington – and created by Washington – in this age of declining national-security spending and mushrooming national-security threats: the United States needs “a strategy-driven budget,” the dean of American statecraft explained, “not budget-driven strategy.”

Despite all its supposed savings, budget-driven strategy is costly – as we’ve learned in the wake of sequestration.