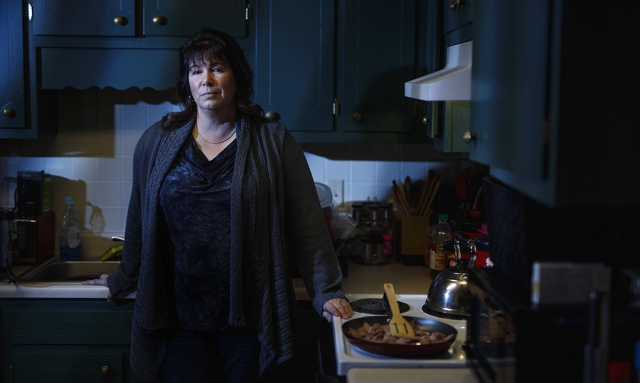 Kathy Keefer had no idea that Fort McClellan was adjacent to one of the nation’s most contaminated communities when she returned for her second Army stint in 1987 while pregnant with her eldest daughter. She didn’t know that decades of polychlorinated biphenyl (PCB) pollution from the nearby Monsanto plant had permeated the tree bark in Anniston, Ala., and turned domestic pigs into hazardous waste. Or that the drinking water had been tainted by heavy metals, solvents and other hazardous waste from the Anniston Army Depot, Fort McClellan and other industrial sources.

She’s thought a lot about it in retrospect, given the strange health problems visited upon herself, her husband – also a Fort McClellan veteran – and her children, problems entirely at odds with their family medical histories.

“If I had known that Fort McClellan was a potential hazard for my unborn child, I would have found a way to stay off base and petitioned not to have gone at all,” Keefer says.

That sentiment is shared by thousands of veterans who suspect that a litany of cancers, autoimmune disorders and other diseases are a result of toxic chemicals they were exposed to while stationed at the base in northeastern Alabama.

“Fort McClellan is a powder keg of what was known, suspected and found there,” says Joan Zakrocki, who earned her bachelor’s degree in public health after leaving the Army and now researches the former base’s environmental problems as an advocate for Fort McClellan veterans and families. “Our time at Fort McClellan was the single most important factor contributing to our health.”

Not only does Fort McClellan’s toxic résumé rival Camp Lejeune, N.C., where trichloroethylene (TCE) and other pollutants eventually forced VA to provide exposure-related health care to Marines, formerly serving Marines and families. But the combination of toxic chemicals from Monsanto, Fort McClellan and the Anniston Army Depot makes it the most contaminated place in the United States, says David Carpenter, director of the Institute for Health and the Environment at the State University of New York at Albany in Rensselaer.

“In terms of documented contaminants, the levels are absolutely outrageous,” Carpenter says. And there’s plenty of anecdotal evidence that Fort McClellan veterans suffered as a result. “There’s too much smoke for there not to be a cause common to those people.”

The issue is particularly acute for female Army veterans, whose future children may have been affected by that exposure, Carpenter says. Add to that the fact that Fort McClellan was once the primary basic training base for women who joined the Army.

“That’s what makes Fort McClellan a little different,” says Diane Zumatto, who suspects her family’s health problems are tied to her time in Anniston. “I think more women were exposed at Fort McClellan than other military bases.”

Rather than getting help from the nation they served, Fort McClellan veterans say they are getting the brushoff, and that VA dismisses the suggestion that servicemembers may suffer health consequences as a result of toxic exposure at the base. “Veterans who mention Fort McClellan to VA providers,” Zakrocki says, “are often rebuked.”

TOXIC LEGACY Fort McClellan was established next to Anniston, a city known for its iron smelters, in July 1917. Named for Civil War Gen. George B. McClellan, the base has had a variety of missions. It trained approximately 500,000 soldiers and was a prisoner of war camp during World War II. The Chemical Corps was activated there in 1951. The Army’s Chemical/Biological/Radiological Agency followed in 1962 and the U.S. Army Chemical School in 1979.

Women’s Army Corps (WAC) basic training started at Fort McClellan in 1952. Approximately 350,000 female recruits trained there before the WAC was disbanded in the late 1970s. Fort McClellan also served as the primary military-police training base for the Army, Navy and Marines, Zakrocki says. Over the years, it had an average population of 10,000 military personnel and 1,500 civilian employees, according to Army websites.

The fort was shuttered at the recommendation of the Base Realignment and Closure (BRAC) Commission in 1999. A portion of the acreage was turned over to the city of Anniston for redevelopment. Some of it became a national wildlife refuge. Some is used by the Alabama National Guard and the Department of Homeland Security.

Fort McClellan’s toxic legacy is virtually unknown, which is surprising considering its own chemical and biological weapons training programs, the chemical weapons stockpile at the Anniston Army Depot, and its proximity to the Monsanto plant that manufactured PCBs in Anniston from 1929 to the 1970s.

There are 209 PCBs. They cause cancer, suppress the immune system, disrupt the endocrine system – the thyroid gland, for example – and elevate the risks of high blood pressure and type II diabetes, Carpenter says. “The thing that most people don’t realize is how many different organ systems can be disrupted by exposure to a chemical.”

Monsanto’s PCB pollution attracted national media attention, including a “60 Minutes” segment in 2002. The company settled a lawsuit with Anniston residents for $700 million in 2003, a sum that reflects the extent of the contamination. “There were PCBs found in the tree bark up to three miles away – about the distance the Monsanto plant is from Fort McClellan,” Carpenter says. Pigs raised by Anniston residents – often the poorer members of the community – were so contaminated they had to be carted off to hazardous-waste landfills.

No veterans were included in the litigation, likely because the attorneys who sued Monsanto focused on civilians who lived in neighborhoods closest to the manufacturing plant and had the highest PCB levels in their blood, says Carpenter, who was an expert witness in the case.

That exclusion is mind-boggling to Fort McClellan veterans. “I don’t know how Anniston was exposed and we weren’t,” Keefer says. “Were we not drinking the same water? Were we not living in the same town? Were we not breathing the same air?”

FIRST SYMPTOMS Keefer’s health problems surfaced soon after she was recalled to active duty as an MP during the run-up to the first Gulf War. Blood started leaking out of her right breast while she was taking a shower at Foot Hood. An Army doctor recommended immediate surgery. Keefer refused and, at her mother’s urging, was examined at a top civilian cancer center in Houston after she left the Army in late 1991. The medical team couldn’t find a cause for the bleeding, but Keefer continues to experience strange discharges from her right breast.

Other medical problems have since piled on: benign cervical tumors and a benign lump in her left breast that grew to the size of a lemon in six months. Abdominal pain, insomnia, fatigue and Hashimoto’s disease – an autoimmune disorder that causes the body to attack the thyroid gland. Keefer suffers the sudden onset of a burning sensation on her left leg that comes and goes without explanation. And she deals with involuntary muscle twitching and gastrointestinal problems. “I had so many physical problems – I had no idea why – that I kind of thought I was a huge hypochondriac.”

No one in Keefer’s family had previously experienced any of these health issues. But one of her daughters now has the same gastrointestinal problems. Another daughter – the one she was carrying during her second stint at Fort McClellan – suffers from periodic bouts of a ringworm-like rash, as does her husband.

“It all goes back to Fort McClellan,” says Keefer, a member of American Legion Post 273 in Madeira Beach, Fla. “It has to be the crap we were exposed to.”

Carpenter confirms that the health consequences of toxic exposure could affect the children of Fort McClellan veterans. “Something your grandmother was exposed to can affect your grandchildren,” he says. “The health effects are going to continue for years, if not generations. That’s why we need to study the women who were stationed at Fort McClellan. Do their daughters have profiles of diseases that are elevated?”

That prospect weighs on Zumatto. Two of her children have had seizures. Her eldest son has Crohn’s disease and her eldest daughter has hip dysplasia. Her sister, also a Fort McClellan veteran, has suffered seizures and two bouts of cancer. None of these health problems had previously occurred in her family.

INACTION Keefer filed a VA claim four years ago. It was rejected. Appealing that decision is a waste of time until the department officially recognizes how serving at Fort McClellan came with exposure-related problems, she says.

VA is far from convinced.

“VA has reviewed several documents on the environmental investigations conducted at Fort McClellan and has found no evidence of widespread contamination issues,” VA said in an email responding to questions from The American Legion Magazine. That applies to PCBs as well, even with Fort McClellan’s close proximity to the now-defunct Monsanto plant. VA’s Fort McClellan webpage cites a report from the federal Agency for Toxic Substances and Disease Registry (ATSDR) that says people who lived outside the neighborhoods near Monsanto didn’t face a higher risk of cancer or other health problems.

“That is an outrageous response that is totally inconsistent with the evidence,” Carpenter says. “ATSDR has a very bad track record of minimizing risks, and they seem not to even know the relevant literature.”

Fort McClellan veterans have long lobbied for a health registry that would help establish whether they’ve experienced abnormal health problems that can be tied to toxic exposure and potentially pave the way for VA health care for those diseases. Carpenter supports that idea.

“It’s impossible, at this stage of the game, to go back and determine all of the things people were exposed to because the base has been closed so many years,” Carpenter says. “We know they were exposed to organic solvents, incinerator emission from the Anniston Army Depot, TCE and some level of PCBs wafting over from Monsanto.”

A health registry is the logical next step. “It’s not trivial,” Carpenter says. “It’s not cheap. But it’s not at all impossible.”

VA, however, opposes a registry, again citing what it believes is a lack of evidence of consequential environmental hazards at the Anniston base. Efforts in Congress to mandate such measures have failed. U.S. Rep. Paul Tonko, D-N.Y., has introduced legislation to establish a health registry four times since 2010, only to have the bills die in the House. He reintroduced his bill in September with bipartisan support from seven co-sponsors, and the measure has been referred to the Veterans’ Affairs Subcommittee on Health. Tonko is optimistic his effort ultimately will succeed as calls for the measure grow from affected veterans around the country.

“In this case, you have a group of veterans who appear to be showing a pattern of severe and otherwise unexplained health consequences, and a denial by the system to acknowledge and support their needs,” Tonko says. “That’s wrong. Creating a health registry is a first step in establishing the link between service at Fort McClellan and serious adverse and deteriorating health.”

Time is of the essence.

“To be clear, these veterans have been left to suffer for far too long already,” Tonko says. “There’s a right way to do this, and we need to get this started now.”